What Does Plus Minus Mean in Hockey? 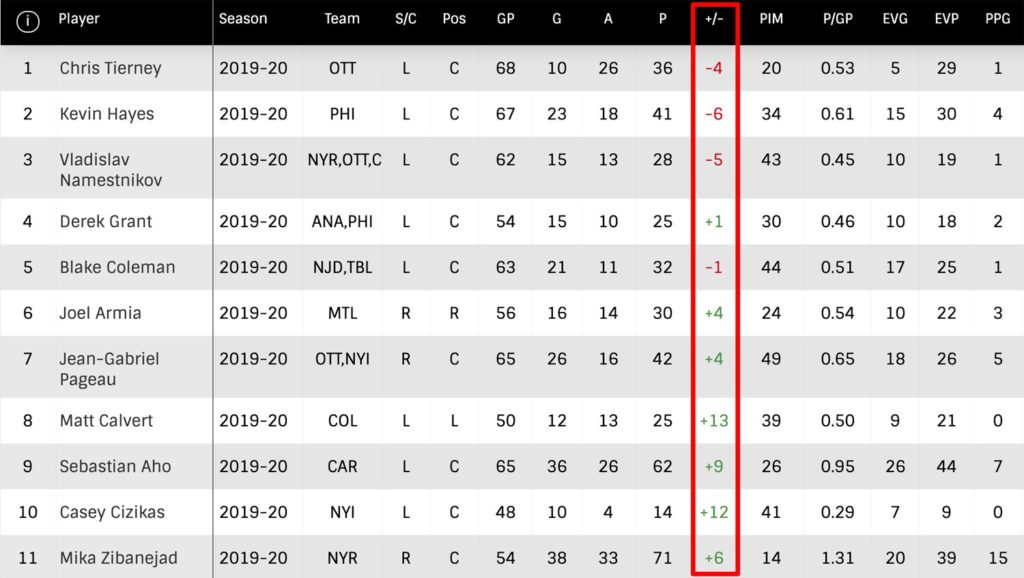 For close to 60 years now, the NHL had devised a way to evaluate overall player performance.

I’m not talking about goals, assists or point totals, because these do not account for defensive end play.

Furthermore, many players excel more at the defensive game than on the offensive side. This generally applies to defensemen and 3rd or 4th line players.

Albeit simplistic in nature, many of the other professional hockey leagues include the same column in their player stats.

The metric in question is the plus-minus rating.

What Does Plus Minus Mean in Hockey?

As a note, the plus-minus is monitored for all skaters excluding goaltenders.

There is no denying that the plus-minus has been used by team management to evaluate their players.

In fact, the stat has been used for performance-based bonuses with players on entry-level contracts. This is highlighted in the Collective Bargaining Agreement (CBA).

For the readers that don’t know, the NHL Collective Bargaining Agreement is the official contract between the National Hockey League and the Player’s Association (NHLPA).

For many years, the stat has received its fair share of criticism.

Shortcomings of the Plus-Minus Stat

Unfortunately, the +/- stat does not take into account any specific on-ice situations. It simply looks at whether you were on the ice or not during the time of a goal.

The problem is that the it relies on too many variables, some of which I’ve described below:

Generally speaking, when the team is badly performing, most players will have a low plus-minus across the board.

However, we can narrow in on the issue simply by isolating individual team lines. If your line has trouble scoring or is weak defensively, you will likely see your plus-minus rating drop.

The same thing will happen for teams with poor goaltending. If the overall goaltending is subpar (low save percentage, high goals against) compared to the league average, players will undoubtedly suffer in the plus-minus department.

If you want to read more about goaltender save percentage (SV%), please visit blog post here.

You can also check out my post about goals against average (GAA), where I outline its own set of shortcomings. See here.

Top Scoring Lines of the Opposition

There are many times where the coach will rely on a shutdown line to defend against the top opposing team lines.

As successful as they may be, the shutdown line will inevitably be overwhelmed and will pay the price in plus-minus.

As an example, what if the coach deploys your line for the bulk of defensive zone face-offs? You’ll end up playing additional time in your zone which increases your risk of getting scored against.

In end the end, you can expect your plus-minus stat to suffer once again.

Here is my two cents on the plus-minus stat – it definitely has its limitations! My biggest complaint comes when the rating is applied to players on a line change.

For example, let’s say that the opposing team rushes up the ice with control of the puck and an imminent opportunity to score.

Meanwhile, your teammate decides to change lines with you on the backcheck, behind the play. Suddenly, you find yourself on the ice with no chance of getting involved in the play, and the opposition happens to score.

As a result, you are negatively hit on the plus-minus even though you had no influence on the play and the goal-against was inevitable.

I included a video below as an example.

On the replay, you'll notice that all the Leafs players on the 2nd wave of the power play stood no chance of preventing the shorthanded goal-against. Sadly, they all earned a -1 to their plus-minus, while the guilty party (1st wave) avoided the negative rating.

By contrast, players can earn a +1 rating if they were to jump on the ice while their team was about to score. Similarly, it would impact their plus-minus rating even without remotely being involved in the play.

Personally, I don’t see the justification in rewarding or punishing players with a plus-minus rating in either scenario.

History of the Plus-Minus in Hockey

The plus-minus rating seems to have an ambiguous history.

It is said that the NHL was privately monitoring the stat since 1963, but only made available to the public in 1975 (source). Furthermore, the source mentions that plus-minus data was only added as far back as the 1967-68 NHL season.

However, when I checked it out on the official NHL stats page, I can see values dating back to the 1959-60 season (source). It’s possible that the NHL had been tracking the stat even earlier than originally thought, but I didn't find any explanation.

While reviewing the career plus-minus ratings in the NHL stats page, I decided to put together a table of the top 5 and bottom 5 career leaders.

In case you were wondering, Bob Stewart (-257) is not the worst player to ever have played at the NHL level. He managed to play 575 total games, which is considered a relatively long career by NHL standards.

Remember that the worst players to have played, probably didn't even make it past their first season or even a few games.

Luckily, there have been other methods to monitor each player’s influence on the ice. Both the Corsi and Fenwick statistics were developed by enthusiastic fans as an alternate to the plus-minus ratings.

Corsi is a statistic that measures shot attempt differential rather than goal differential. It compares all shots-for and shots-against, including missed and blocked shots, for every player on the ice at even strength. (source)

In short, the Corsi measures the positive or negative influence of each player when it comes to puck possession, stated in percentage.

Fenwick is similar to Corsi in that it compares all shots-for and shots-against, including missed shots only at even strength. However, it excludes block shots and is measured as shot differential for individual players. In the NHL, the stat is known as USAT or Unblocked Shot Attempts Differential.

The plus-minus rating was one the first stats established to judge a player’s combined abilities on offense and defense.

The value can increase or decrease by one (+1 or -1) based on scoring during 5-on-5 play or shorthanded goals.

The problem is that plus-minus rating alone is not very reliable to evaluate overall player performance.

The +/- has its shortcomings.

It tends to be low even for good players on bad teams. Such as for teams with weak goaltending or a porous defense whose abilities can negatively impact the remaining players on the ice.

The NHL and other leagues have adopted far more reliable metrics including the Corsi and Fenwick stats. Rather than judge a player based on goal differential while on the ice, they’ve invested more effort in comparing shot differential.

Nonetheless, the plus-minus is here to stay, regardless if teams still use it to evaluate player performance.