What Does RW Mean in Hockey Standings? 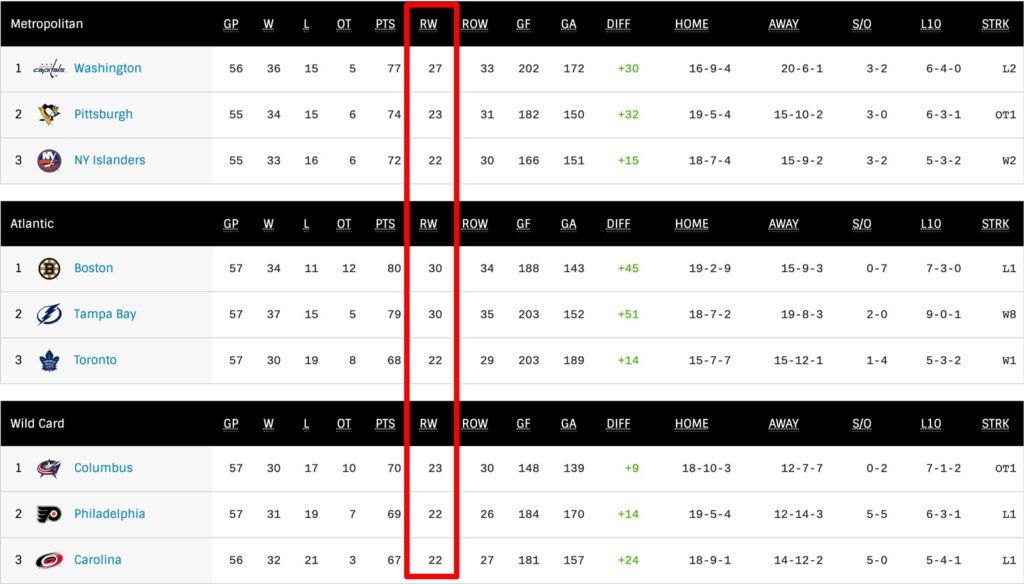 When it comes to NHL Standings, teams are battling one another to qualify for playoffs and earn a chance at winning the Stanley Cup.

On occasion, two or more teams may finish with the same number of points and their place in the standings is determined using a tie-breaking procedure.

There are 7 rules to the tie-breaker, each one preceding the other. Most of these rules are governed using the following column stats: PTS, RW, ROW, GF, GA and DIFF (see descriptions below).

For a full breakdown of the Tie-Breaking Procedure details, visit the NHL Standings page on NHL.com. Rule #5, by the way, will have your head spinning!

Tie-breaker Rule #2 involves the RW stat. Nice acronym, but you want more details as the stat seems to have just appeared out of nowhere.

What Does RW Mean in Hockey Standings?

RW stands for Regulation Wins and was introduced in the 2019-20 NHL standings, next to the ROW column. The NHL now considers regulation wins more valuable than overtime wins. So when two or more teams are equal in points, the team with more regulation wins will rank higher, even with a lower ROW total.

Now you still might be scratching your head and asking sheepishly...

What does ROW mean in hockey standings?

ROW stands for Regulation plus Overtime Wins and was added to the NHL standings table in the 2010-11 season. The ROW stat was created to differentiate between team victories and shootout wins. The league felt that team victories should outweigh the individual nature of shootout wins.

What happens when teams have the same RW?

When two or more teams have an equal Regulation Wins record (and same point total), the next step is to look at total of regular and overtime wins (ROW stat). This is according to Rule #3 of the Tie-Breaking Procedure.

Example of how the RW stat applies in the standings

What are all the NHL standings abbreviations?

DIFF = Goal Differential (Goals For minus Goals Against)

AWAY = Record on the Road 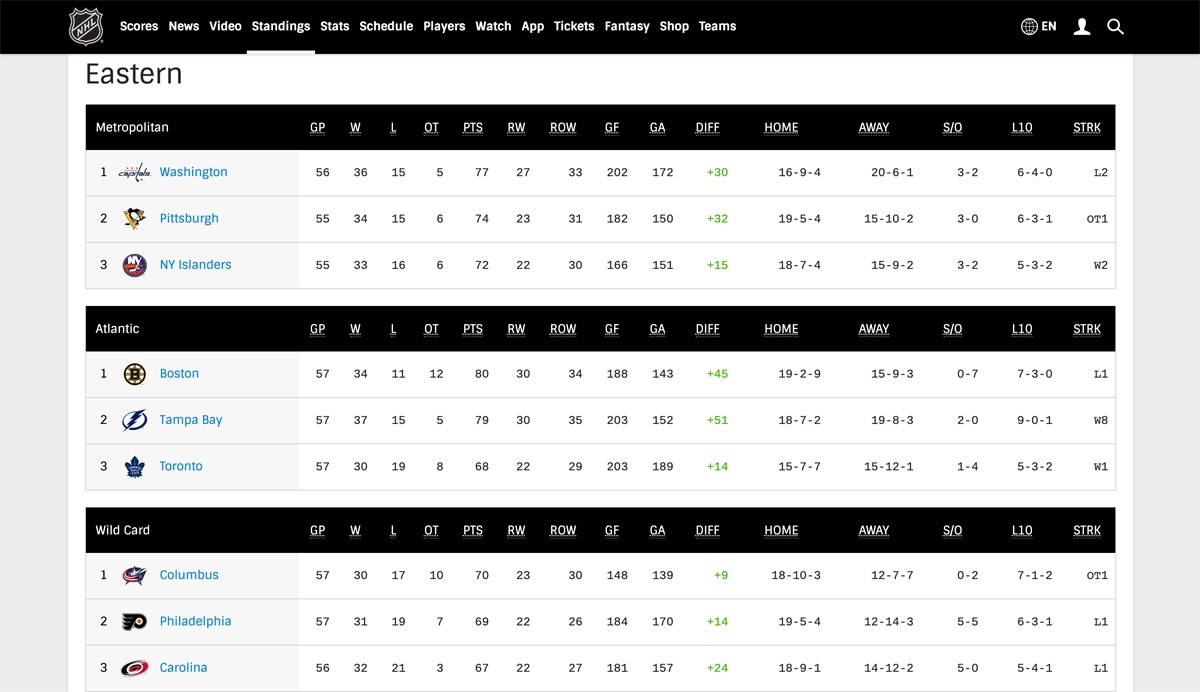 How do teams earn points in the standings?

One topic of discussion that comes up every year is why doesn’t the NHL simply change team wins from a 2-point to 3-point system.

Basically, reward teams with 3 points for regulation wins and 2 points for overtime or shootout wins. Meanwhile, no point changes to any of the losing team scenarios.

The reason is that more teams will see their playoff hopes dwindle a lot earlier in the season. As a result, hopeless teams will purposely become a lot less competitive and focus on targeting a better position in next year’s draft.

Furthermore, you’d see more coaching and management changes, players demanding to be traded to contenders, teams trading away expiring contracts, etc. In essence, there would be a domino effect that would reflect badly on the NHL.

Since the addition of the shootout back in 2005-06, the NHL has introduced many changes to the overall team standings.

In the years prior, games would end in a tie when the overtime clock expired. Back then, teams were worried to give up the extra point to one another, namely because they were likely divisional rivals. As a result, overtime periods would end up, too often, in a stalemate.

The shootout brought tons of excitement to the game by showcasing individual player skills. But some teams were being punished for losing at the shootout, while stockpiling on regulation wins.

By adding the RW stat and the other Tie-Breaking Procedure Rules, teams would finally get proper recognition in the standings for regulation wins.

Of course, without changing the point system or weakening too many clubs from making the playoffs.

It’ll be interesting to see what changes to the team standings they bring next.

If so, what do you think it could be?