What Does DIFF Mean in Hockey Standings? 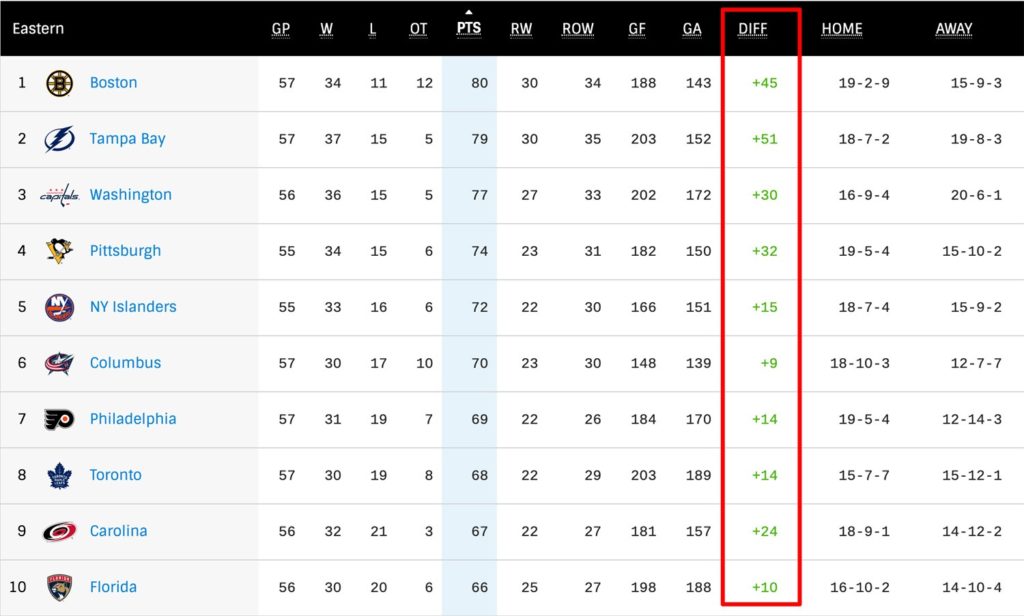 When trying to figure out which teams outrank each other in the NHL standings, you’ll come to realize that it can be a daunting task - even for the typical hockey fanatic.

If a newbie were to ask you how many teams qualify to make the playoffs, that’s an easy answer – 16.

But what about if they ask this follow up question: “So the top 16 teams make the playoffs?”

Now they just opened up a whole can of worms.

I don’t have to go too far back when this didn’t hold true. Just last season, the Montreal Canadiens finished with 96 points in the standings, good for 14th overall. Needless to say, they didn’t qualify for the playoffs, while 3 teams below them did.

As a note, those teams are in the Western Conference, while the Canadiens are in the East.

You can then tell the newbie that 16 teams make the playoffs - 8 from each conference. Just remember, it’s not necessarily the top 8 in each that would necessarily qualify.

Now you’d have to explain that:

As a result, the newbie’s brain is twisted more than your average pretzel.

To make matters worse, try bringing up the tie-breaker rule and you’d confuse yourself figuring out which of teams deserve to be ranked higher in the standings.

Now we’re crossing into the righthand columns of NHL standings - you know, those that come after PTS (Points) column.

One of those columns is the DIFF stats.

What Does DIFF Mean in Hockey Standings?

The DIFF stat has been monitored since league inception, back in 1917-18.

As highlighted above, the DIFF stat plays a role in determining standings when 2 or more teams are even in points.

When this happens, the NHL applies a Tie-Breaking Procedure made up of 7 preceding rules (as of 2019-20). The DIFF stat applies in rule #6, which means it is less important than other elements.

For full breakdown of the Tie-Breaking Procedure details, scroll to the bottom of the NHL Standings page on NHL.com.

The league places greater priority on wins, and also how those wins were achieved.

I've written about how the tie-breaker procedure applies to wins, where I compare regulation vs overtime vs shootout victories.

For this example, we are assuming that the Montreal Canadiens and Florida Panthers split their season series equally. That is, they've played head-to-head 4 times during the season and each team won 2 games in regulation. This means that rule #5 of the Tie-Breaking Procedure reached an impasse, allowing for rule #6 to apply – the DIFF stat.

What if teams are tied in Goal Differential?

When two teams are tied for Goal Differential, the next tie-breaker step (Rule #7) is to look at compare the “Goals For” of teams that are tied. The NHL will rule that a team with more “Goals For” earns a higher spot in the rankings.

In this example, both teams have equal goal differentials (DIFF), however the Montreal Canadiens scored 25 more goals than the Florida Panthers throughout the season. As a result, Canadiens would ranked above.

Certain people will look at the DIFF stat and analyze each team’s offensive and defensive capabilities. In some cases, you’ll see a team score many “goals for” while also allowing lots of “goals against” – resulting in an even DIFF (ex: +1). Hockey analysts could use this stat to dive deeper into a team’s balance and structure. More specifically, they’ll analyze a team’s efficiency in offense, defense, goaltending, powerplay, penalty kills, etc.

So, although the DIFF stat does play a role in overall standings, it also paints a story about the performance of each team heading or missing out on the playoffs.

At this point, you might be asking yourself what are records for best and worst goal differentials set in the history of the NHL. Luckily, you won't need to ponder anymore, as I've provided these stats below:

Needless to say the Canadiens were playoff contenders in 1976-77. In fact, they won the Stanley Cup that year - the first of 4 consecutive championships back then.

As for the Capitals, they were no where close to being a contender their season.

It's quite obvious that teams can benefit from scoring many goals, while limiting goals against during the season.

For one, outscoring your opponents will result in more team victories. And as a result, teams will rank higher in the standings, leading them to a Stanley Playoff berth.

Sometimes, the advantage of outscoring your opponents can be subtle. When a team is on the playoff bubble or fighting for home-ice advantage, any tie in NHL Standings can be settled by the DIFF stat (Goal Differential).

That is, the greater the team’s the goal differential (in their favor), the higher they’ll rank in the season standings.

Simply put, the DIFF stat can prove valuable to teams vying for the playoffs.

Do you ever feel that your favourite team fails to take advantage of the DIFF stat?