How Many Players on a Hockey Team? 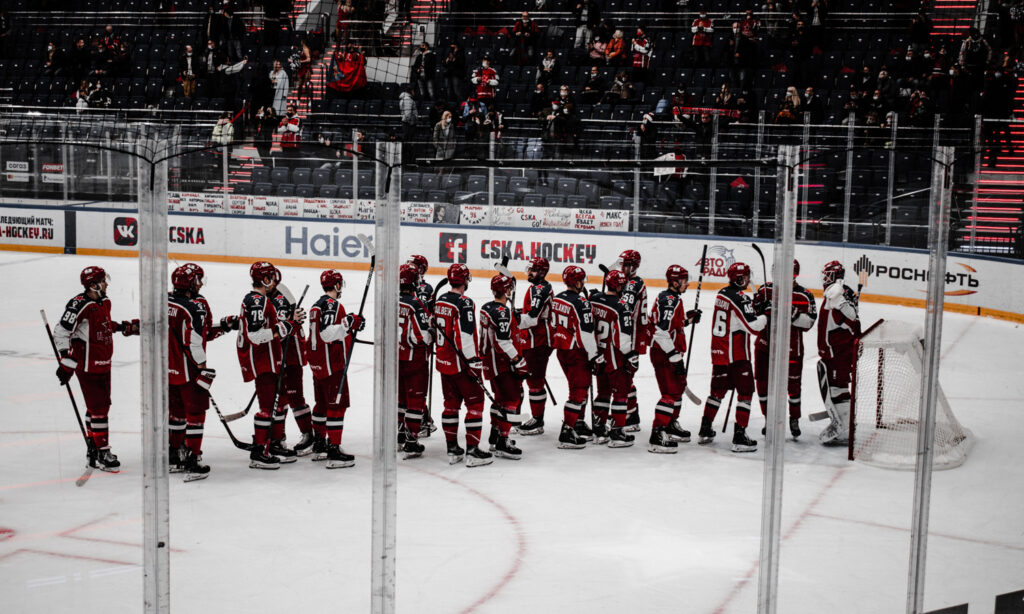 Have you ever watched a hockey game and started counting the players both on the bench and on the ice?

You may have also noticed that the players in the warm-up do not necessarily match up with final the game roster.

We’ll explain these discrepancies. But let’s start with the burning question…

How many Players on a Hockey Team?

There are 20 players on a hockey team made up of 18 skaters and 2 goaltenders in the NHL. The 18 skaters normally consist of 12 forwards and 6 defensemen, but the coach can modify the balance in each game. The current roster statute has been in effect since the 1982-83 NHL season.

Teams can choose to dress any player from their 23-player active roster, which must always include 2 goaltenders. The three extra active players from the 23-player squad are considered healthy scratches at game time.

As hinted earlier, you may see these players during the team warm up (prior to the game), but they don’t make the final roster cut. Maybe one of the players has not fully recovered in time from an ailment or the coach is making a last-minute decision.

That said, the active roster is not final line drawn in the player depth chart. There is a deeper pool to choose from.

Players from the active roster are selected from the team’s maximum 50 Standard Player Contracts.

Most of those remaining players under the Standard Player Contract play for an AHL-affiliate team but can include injured NHL roster players. The team manager(s) can swap members from the NHL squad with players on the affiliate teams through a process called waivers.

If you want to better understand how rosters and player contracts are managed at the NHL level, make sure to read my blog post: How Many Players are in the NHL?

How Many Players on the ice per hockey team?

During the game, teams can each have up to 6 players on the ice at any given time. The standard player formation consists of 3 forwards, 2 defensemen and a goalie.

This can change if a team gets a penalty, goes on the power play, pulls the goaltender for an extra skater or the game goes to overtime.

When a team is called for a penalty, a player is sent to the penalty box. The end result is that the offending is down a player (i.e. 4 skaters rather than 5).

Should the team get called for another penalty, their body count would reduce to 3 skaters. That is maximum allowable player deficit during penalty kills – 3 skaters and a goalie.

Nowadays, we often see teams ice 4 forwards and 1 defenseman while on the power play. The strategy is to increase their chances of scoring by adding an extra attacker on the man advantage.

In rare occurrences, you may even see 5 forwards and no defensemen at all on the power play. Basically, there is no minimum requirement for the number of forwards or defensemen to be on the ice during play.

If you'd like to learn more about power play strategy, structure and why penalized teams can only be down a maximum of two skaters, check out my blog post here: What is a Power Play in Hockey?

Teams pull their goaltenders on a delayed penalty call against the opponent or when a goal is necessary to keep them in the game.

When the goalie is pulled, the team can ice any additional player of their choice (forward or defenseman). As such, the team chooses to play with an open net with the hopes of scoring.

There is less risk of allowing a goal against for an imminent penalty call, because the play is blown dead when the opponent touches the penalty. However, there is always the small possibility of scoring an own-goal.

When a game is tied after 60 minutes (regulation time), teams play a 5-minute overtime during the regular season.

Since the 2015-16, overtime games were played 3-on-3 in order to increase the chances of scoring. One mandatory rule is that the goalie cannot be pulled at any point during the overtime.

Lastly, there are exceptions in the player count if a penalty is called. In overtime, the team on the power play can ice an additional player or two.

To make matters more interesting, should the offending team kill off the penalty, their player count would temporarily increase until the next whistle.

Prior to the 2015-16 NHL season, overtime periods would be played 4-on-4. The same rules would apply as for 3-on-3, except that a two-man advantage powerplay would add a skater on one side while reducing one on the other side.

Basically, overtime power plays would either start off as 4-on-3 or 5-on-3 for the advantaged team.

That said, there must always be a minimum of 3 or maximum of 6 skaters at any given point during a game. In the minimum scenario, the team would also be icing their goaltender for a total of 4 players.

History of Player Count on an NHL Hockey Team

As mentioned earlier, the NHL did not allow the current 20-man roster until the 1982-83 season. So how did the manage team rosters prior to then?

I was surprised to learn there was a lot of back and forth with the player count. Read on to find out.

The first known hard team roster requirement came about in the 1925-26 season. Teams were allowed up to 14 players on their roster, to which only 12 players could suit up for game time.

By the 1929-30 season, the maximum players allowed to dress each game increased to 15. There is no mention of the limit of players to the overall roster.

This mandate was revised in 1938-39 NHL season to allow for 15 players to dress again.

But following the start of the 1942-43 season, the number was once again reduced to 14 players. One new stipulation is that a 12-man game minimum was abolished.

In the 1949-50 season, the game roster count was increased to 17 players not including the goaltenders.

But two seasons later, in 1951-52, the game roster count was again reduced to 15 players plus the goaltenders.

Interestingly, the following season in 1952-53, teams could only dress 15 players for road games, while 16 players could dress at home.

The number was adjusted to 16 players (excluding goalies) for away games the very next season.

It was upped again at the start 1954-55 season to 18 players plus goaltenders. However, that number was reduced again 16 (excluding goalies) by December 1st, 1954.

In the 1965-66 season, teams were now required to dress two goalies for every regular season game.

The 1971-72 season, another change was made. The player count for game time was increased to 17 players and 2 goaltenders.

Finally, the last change was made to 18 players and two goaltenders in the 1982-83. This is where we are today.

To recap, there were at least 14 changes made to game time rosters throughout the NHL’s history. I’d like to note that was an unknown change made between December 1st 1954 and the 1959-60 season.

Both these timelines mention the game time limit was set to 16 players plus the goaltenders without mention of anything else in between those seasons.