What Does Wheel Mean in Hockey? 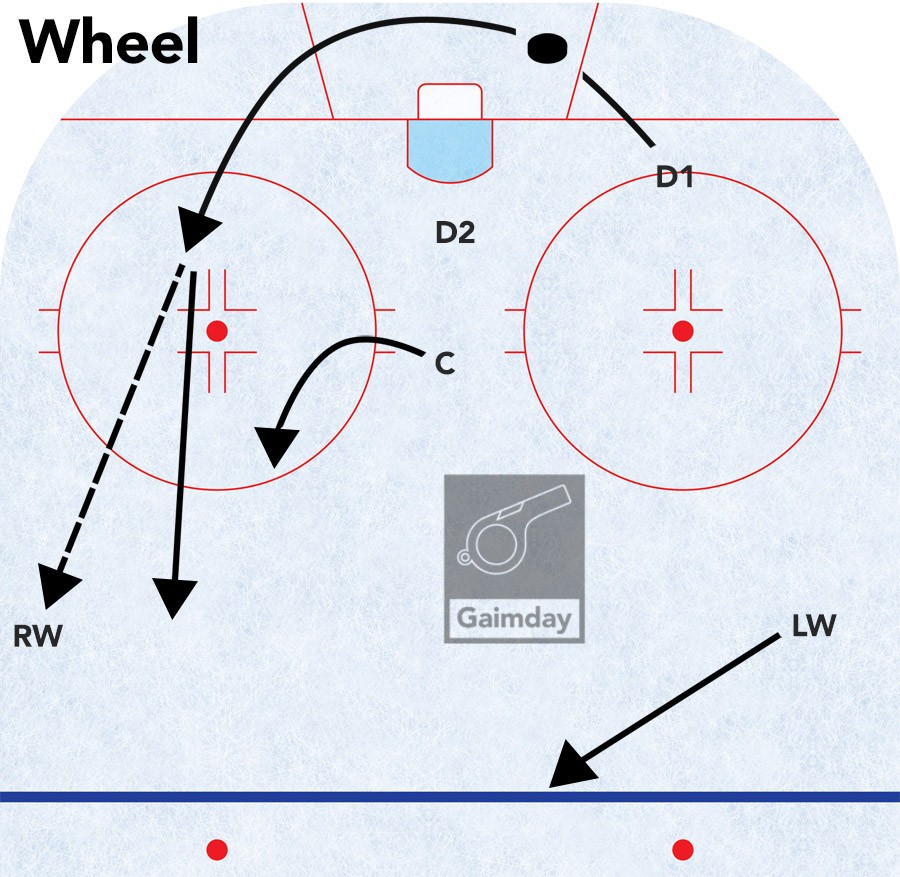 Whether you’re watching an NHL game live or on television, you’ll often hear hockey players yelling on the ice.

At times, they'll be screaming profanities at their opponents or just whining really loudly to the referees or linesmen.

But sometimes it can be between players on one team.

When they’re yelling at other teammates, it's usually words of encouragement or terms related to strategy. These remarks are typically short such as “time”, “skate”, “drop” and “wheel”.

Some of them are self-explanatory.

“Time” means that there isn’t any imminent threat on the puck carrier by the opposition. In other words, the carrier has plenty of time to decide on what to do next with the puck.

“Skate” is another way of telling your teammate to go faster (hustle), whether it’s on the forecheck or back check.

“Drop” is called out by a teammate just behind the puck carrier in the offensive zone. Basically, the open player is calling for the carrier to leave or pass the puck behind to them.

But some of the other terms can be more complex, such as “wheel”.

What Does Wheel Mean in Hockey?

You often hear “wheel” being yelled at between teammates in the defensive zone, while in control of the puck. That’s because the wheel is a breakout strategy employed by the defensemen deep in their end. The play consists of the defensive player carrying the puck behind the net and skating up ice with it at high speed.

Meanwhile, the second defenseman is providing a pick for their partner by standing in front of the net. This prevents any opposing forechecker from skating across the slot area to cut off the puck carrier.

If you think about it, the player yelling “wheel” is acting as the eyes and ears on the play. The same way a third-base coach waves in their runner to home plate in Baseball.

In both these situations, the active players are given the green light to proceed without hesitation.

What’s even more fascinating is that with one simple word, you are telling your defensive partner the following:

At the tail end of a wheel play, the puck carrier will either pass the puck up to one of their wingers or skate with it through the neutral zone. Typically, the center will circle low in the zone to support the rushing defenseman.

But there are times when the wheel is not the most viable option. Luckily, teams train on alternative strategies during practice.

Alternative Break Out Strategies to the Wheel

Coaches will teach their teams 5 main breakout strategies, including the wheel:

The strategy that most closely resembles the wheel in the beginning, is the Reverse.

In this scenario, the defenseman begins his route behind the net with the puck. The problem is that there is a forechecker in tight, making the wheel a less viable option.

Instead, the carrier will bank the puck off the backboard reversing the play to their defensive partner, who was originally in front of the net providing the pick.

The supporting defenseman yells “up” so that they partner knows to spin the puck out along the boards on their strong side. The end result should be a quick pass to the winger on the same side.

Again, the play is designed based on where the opposing pressure is coming from. In this case, the forecheckers are either hovering in front of the net or attacking from behind net (from the opposite).

In this situation, the forecheckers are directly attacking the side where the puck is found. The supporting defenseman will yell “over” so that their partner knows to pass the puck behind the net.

Depending on the defenseman’s angle, they can either bank the puck off the back boards or make a tape-to-tape pass to their partner.

After completing the defense-to-defense passing sequence, the next pass is to the winger up on the same side.

This play is similar to the Over strategy, except it involves sending the puck behind the net and around the boards to the winger. The Rim can be an effective strategy if the opposition sends 3 forwards deep on the forecheck.

Essentially, it would force the defenseman on the opposing team either to confront the winger and risk a 2-1 break out, or pull back and allow the winger to exit the zone unchallenged.

Why is it Called Wheel?

For many years, I thought the term had a similar meaning to the wrap around in the offensive zone. That is, players are spinning out from behind the net towards the front or up ice.

In the case of the wrap around, it means going around the net as it is implied.

But for the wheel play, the term actually means to “go faster”. Basically, you’re telling your defensive partner to put the pedal to the metal as soon as they scoop up the puck behind the net.

It just happens that you can build the good momentum and speed when looping around the back of your net.

As you noticed, all these break out strategies involve passing plays and quick transition on the rush. In all the videos, the players are using simple tape-to-tape passes to exit the zone.

If you want to learn more about passing plays and which one I consider the most difficult to master, make sure to check out my blog post here.

The wheel is one of the most distinguishable terms yelled out by players on the ice.

In my beer leagues, you’ll almost never hear these terms being yelled out at all. That’s because most players were never even taught the advanced strategies during their teenage years.

Perhaps it’s because they picked up hockey later in life or they never played beyond a house league level.

In the end, the more you watch professional hockey, the more you realize that this is more than just a pick-up hockey at the pond.

Players are constantly utilizing strategies taught to them in practice to make them quicker and more efficient. That includes yelling strategies to one another on the ice.