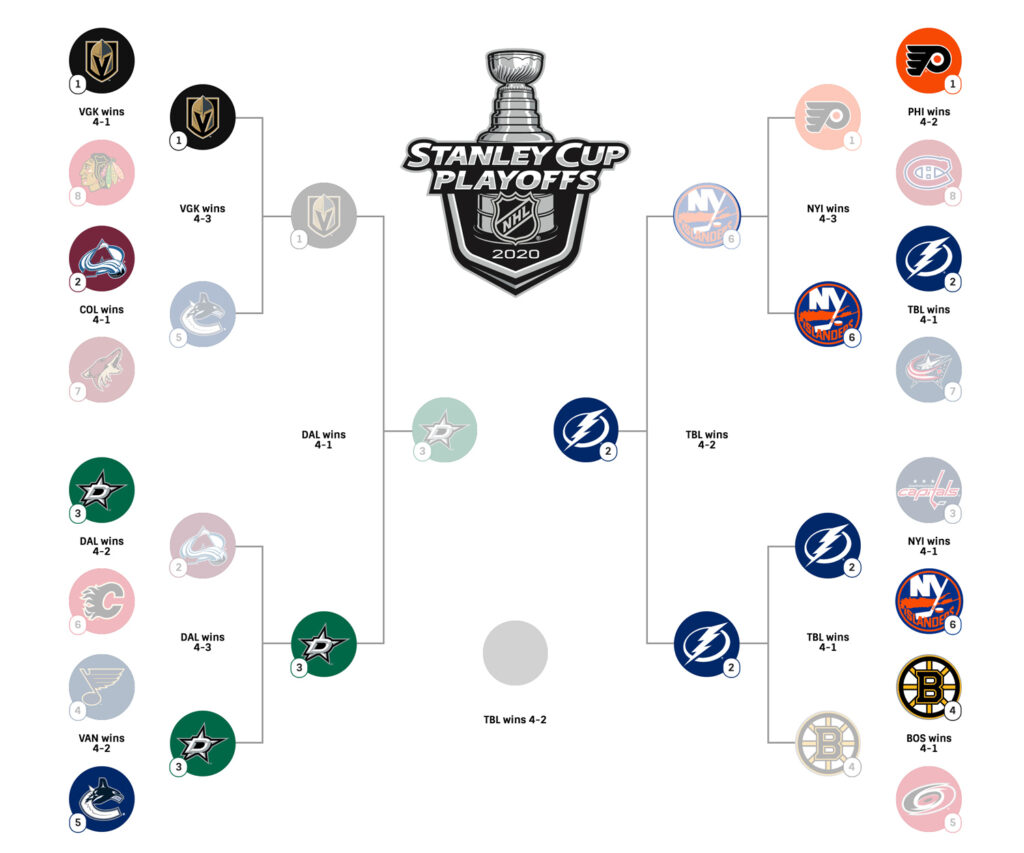 Your palms are getting sweaty, your stress levels are high, and you start endlessly looking up predictions from your favorite and not-so-favorite hockey pundits.

That’s right, the playoffs are right around the corner.

Some teams have been qualified for the Stanley Cup Playoffs weeks in advance, while others just squeaked on in.

Now that the teams are set, you might have asked yourself how did we get here and what should we expect?

Let’s start with the burning question.

How do NHL Playoffs Work?

There are sixteen teams that qualify in a 4-round, best-of-7 elimination series in the NHL Playoffs. The first team to reach 4 wins in their series matchup continue onto the next round. The winner in the final round is crowned as the Stanley Cup Champions.

[Special Bonus - I also explain the 2021 NHL Playoffs (see in Table of Contents or scroll down).]

In order to understand how teams can reach the NHL playoffs, let’s me explain how the league is structured.

The league is divided into two conference: Eastern & Western Conference.

As you probably expect, teams are separated based on their time zones, regardless whether the city is located in United States or Canada. There are currently 31 NHL teams, with the Seattle Kraken anxiously waiting to join the mix as of the 2021-22 season.

The division name is gives you even a better hint at where these teams are located on the map.

There are three divisions with 8 teams, while the Central division has 7. You might be asking yourself which division will Seattle be placed considering they border the Pacific?

Actually, the Seattle Kraken will join the Pacific division, while another west coast team will move.

So, which team will move to the Central division with Seattle Kraken joining the Pacific?

At this point, you must be saying this is all fine and dandy, but which teams make the playoffs?

Let’s cut to the chase - the top three teams in each division are guaranteed a playoff spot.

However, these teams only account for 6 of 8 playoffs spots in each conference. So, how are the final spots filled?

The final spots in each conference are known as Wild Card spots. They are awarded to the top 2 teams in the conference outside of the existing 6 divisional qualifiers. In case you were wondering, it is possible for those 2 spots to be filled by teams in the same division.

Furthermore, it’s also possible for the Wild Card teams to have more points than 1 or more teams of a divisional qualifier.

And lastly, there is also the outside chance that a team excluded from the playoffs may have finished with more points than a Divisional qualifier.

So, for those questioning, it’s not necessarily the top 16 teams that make the playoffs. Nor is it always the top 8 teams from each conference.

Once all 16 teams are qualified for the playoffs, they are sorted by their divisional standings.

That is, Divisional Qualifiers are ranked 1 through 3 in their respective divisions. Moreover, each division invites a Wild Card team to qualify in the #4 position.

The divisional teams ranked 2 and 3 face are always guaranteed to face each other in the 1st round.

So, which Wild Card team is paired with the top seeds of each division?

The team finishing with the most points in the conference - the better of the two top seeded divisional teams - plays against the weaker wild card team.

Which means that the other divisional leader plays against the higher-ranked wild card finisher.

Before we break down each round of the playoffs, take note of the game structure for each series.

The higher-seeded team of each matchup receives home-ice advantage. Since it’s a best-of-7-games series, this is how their games are scheduled:

Game 5 at home (if necessary)

Game 6 on the road (if necessary)

Game 7 at home (if necessary)

This is also known as the 2–2–1–1–1 playoff format, and it applies throughout all playoff series.

Also, if you thought that 3-on-3 overtime followed by shootout was employed in the Stanley Cup Playoffs, you were wrong. Those rules only apply to regular season games.

In the playoffs, teams play “sudden-death” overtime. The game ends the moment either team scores to break the tie.

If you’re wondering what the longest game in NHL history is, make sure to check out my blog post on How Long is Overtime in Hockey?

Hint: It was equivalent to almost 3 full regulation games.

The first round of the playoffs is also referred to as the Quarter Finals. With 16 teams starting their playoff journey, there are 8 total matchups.

Teams are typically given 2-3 days off between games, but there are exceptions in case of venue conflict.

Sometimes there are concerts or other sporting events scheduled that may interfere with the NHL playoff games.

Furthermore, some of the series may finish early (team wins by 4-game sweep), while others may carry out the full 7 games.

In that case, the early winners will have to wait until the 1st round is complete for all teams.

Once the first round is over, the two winners in each division face off against one another.

In fact, there are 4 possible outcomes for divisional matchups in round 2:

There are only 8 teams remaining in Round 2.

As in the first round, teams must wait for the outcome of the other matchups to continue on.

The Conference Finals is where the winners of each division square off. That is, the two remaining teams of each conference play one another.

At this point, only 4 teams remain in the playoffs altogether.

The Eastern team is rewarded with Prince of Wales trophy, while the Western team earns the Clarence S. Campbell Bowl.

Since the 1997 finals, there’s been an NHL superstition that players should avoid touching the conference championship or risk losing in the Stanley Cup finals.

It was following the series between the Philadelphia Flyers and the New York Rangers the superstition emerged.

The Flyers won the series and Eric Lindros refused to touch the Prince of Wales trophy. The thinking was that you haven’t won anything until you actually win the Stanley Cup.

However, in the Western Conference, Captain Steve Yzerman of the Detroit Red Wings opted to touch the Clarence S. Campbell Bowl.

The reality is that close to half the teams whose players touched the conference trophies have also won the Stanley Cup championship.

But if you witness this in either of the conference series this year, at least you know the back story.

The answer is actually simple. The team who finished with the most points in the overall (league) standings earns home-ice advantage.

It’s possible that both teams finished equal in team points, but the league tie-breaker applies. Again, if you want to understand how tie-breakers are settled for teams equal in points, make sure to check out my blog post on Hockey Standings Explained Column by Column.

The winner of the series is crowned the Stanley Cup champions.

Players who played at least 41 regular season games or 1 one game in the Stanley Cup Finals for the winning team get their names engraved on the cup.

There is also a hard limit of 52 names that can make it on the cup for each year.

4 teams in each division will play in a 4-round, best-of-7 elimination in the 2021 Playoffs. The first two rounds will be intradivisional play. The winner of each division will be reseeded based on their regular season point totals. The #1 seed plays #4 seed, while #2 plays #3. The remaining 2 teams will meet in the Stanley Cup Finals.

There is no indication whether games will be played in "hub" cities or teams will continue hosting games at their home venues.

If the COVID-19 protocols remain in place for the United States and Canada, then we'll most likely see playoff games hosted again in "hub" cities.

If so, the league will need to quarantine teams for a 2-week period when they cross the border. Would this happen at the start of the playoffs?

If not, the 3rd round would be key as the lone Canadian team must face one of the American teams.

The goal is to have the Stanley Cup Finals wrap up by July 15.

The NHL would like to see the schedule return to normal and resume regular season play in October 2021.