How many players on a basketball team? (Roster Size) 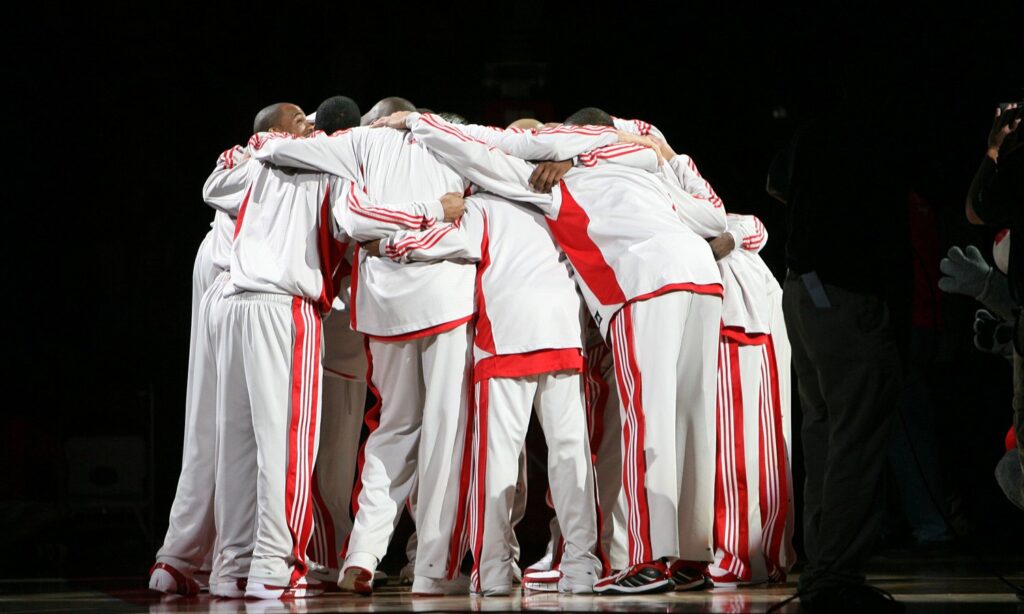 Have you ever wondered how many players are on a basketball team in total, including those on and off the court?

While the number of players on the court can easily be determined, how many of their teammates are sitting on the sidelines?

Between gameday and the overall roster count – the numbers are different.

In fact, there’s even a disparity between the in-season and off-season count.

But, before we break it down to the core, let’s give a firm answer to your question.

How many players on a basketball team?

Teams can have up to 15 players signed to official NBA contracts for their regular season (in-season) roster. Each team can also carry up to 2 players under two-way contracts, along with players signed to 10-day contracts. The active roster list must consist of 12-13 players, while the gameday count can be no less than 8.

While the 15-player roster is a hard limit set during the season, teams are allowed up to 20 players on their roster in the off-season.

Some teams may sign less than the required 15 players to NBA (1-way) contracts, but the very minimum is 13 players.

If you want to learn more about teams and their roster salaries, make sure to check out my blog post here on What is the Average NBA Salary?

When it comes to the active roster list, the requirement is to have 12-13 players at all times.

There is a caveat in the Collective Bargaining Agreement in which a team is allowed 11 players on the Active List. However, this may last for no longer than 2 consecutive weeks.

Players that are signed to two-way contracts will see limited playing time in the NBA. They are usually called up from the G League, which is the NBA’s official minor affiliate.

The two-way contract means that they get paid a different salary for the time spent in each league.

For example, if a G League player gets called up to the NBA, they are paid a prorated amount of their NBA contract.

Once they are sent back down, they resume the G League contract they were signed to, minus the time spent in the NBA.

Obviously, the NBA pays significantly more than the G League - even when comparing the NBA base salary to the G League top earner.

Minimum number of players that can dress on gameday

The NBA knows there's the possibility that roster players may get injured. So, while teams can dress a maximum of 13 players, the very minimum is set to 8.

For those of you new to the game, dressing 8 players can seem very low considering how long basketball games last.

If somehow the roster would be diminished to less than 5 players during play (i.e. ejections/injuries), the NBA has a clause in place.

The last player to foul out will be reinstated for the remainder of the game.

The caveat is that every foul committed by the ejected player after that would be automatically deemed a technical.

How many basketball players are on the court?

Each team must have 5 players on the court at all times during the game. That means, you typically have an additional 8 players available to play from the bench.

These bench players come in handy when your starters need rest, get into foul trouble, suffer an injury or were ejected from the game.

The five players on the court are typically composed of 2 perimeter and 3 post players.

Perimeter players are made up of a shooting and point guards.

The 3 post players consist of your center, small and power forwards.

There are some additional key points when it comes to team rosters.

Players assigned to the military, suspended players, unsigned picks and retired players are ignored from the roster count.

Should a team be unable to meet the 12 minimum Active Player List due to injuries, they can apply for a Hardship exception.

Once the Hardship exception ends, one of the roster players must immediately be placed on waivers to meet the In-Season Roster Limit of 15.

First and foremost, the same rules that apply for the In-Season Roster Limit and Active Player List applies to the playoffs.

In order for a player to be eligible to play, they must have played at least 1 game during the regular season and have not been waived past a certain date.

Lastly, each team must submit their playoff roster before the NBA playoffs begin.