How Many Hockey Players on the Ice? 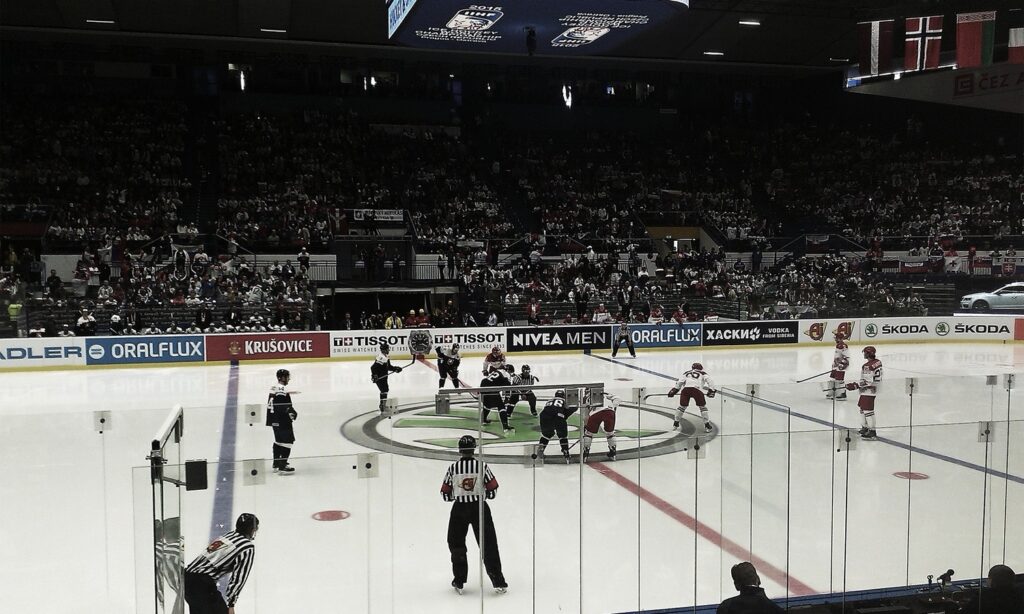 If you’re watching an NHL game, you might be curious as to how many players are on each team.

Should you count all the players dressed for the game, that number will likely be 20.

Each forward line is composed of a center, right winger and left winger. The defensive pairs are split into the right and left side.

On occasion, teams might even dress an extra defenseman (11 forwards-7 defensemen) in place of a forward.

I go into more detail about this in my blog post here called How Many Players on a Hockey Team?

If salary cap becomes an issue, teams may even be required to dress less than 20 players altogether.

But each team must always have a starting and backup goalie for each game.

However, we know that not all players can be placed onto the ice at once. This is what line combinations and shifts are for.

How many hockey players on the ice?

There are 6 players on the ice for each team in a hockey game. At even strength, teams use line combinations made up of 3 forwards and 2 defensemen during each shift. The sixth player is the goaltender, who remains on the ice for the majority of the game.

Teams cannot ice more than 6 players at once without being in violation of “too many men on the ice” (source - Rule 74).

You can swap out the goalie for an extra player and there is no hard limit to how many forwards or defensemen can play on a shift.

That is, the coach can choose to ice 5 forwards or 5 defensemen if that tickles their fancy.

Although icing 5 defensemen would be quite a questionable tactic.

Going five forwards might happen on the power play or if the team is in desperate need for a goal – but don’t expect this strategy to be applied regularly.

Probably the only restriction to the 6-player limit is that you cannot have both your starting and backup goalies on the ice simultaneously.

Meanwhile, teams might be required to ice less than 6 players, such as on a penalty kill, overlapping minor penalties, overtime and so on.

I cover this in the following segment describing the different gameplay scenarios.

How many players on the ice during the powerplay or when a goalie is pulled?

Before we start, let’s clarify some of the lingo related to gameplay in hockey.

When a commentator states that “teams are playing 5-on-5”, they are referring to the number of skaters on the ice.

Skaters are made up of forwards and defensemen only (i.e. excluding the goalie).

This “X-on-X” situation becomes more apparent when the goalie gets pulled for an extra attacker.

As mentioned, 5-on-5 gameplay is another way of stating that both teams are at even strength, 5 skaters on each side.

In addition, their goalies each complete the maximum of 6 players allowed on the ice per team.

Also, there is the rare scenario in which a shorthanded team will pull their goalie to make up their 5th skater. While it also considered 5-on-5, the shorthanded team is at a disadvantage with the empty net.

This scenario is observed when a team pulls their goalie for an extra skater.

Typically, the team with 6 skaters recalled their goalie because of a delayed penalty call against the opposing team or they are in desperate need to score a goal.

The reason for pulling the goalie on a delayed penalty is that the moment the opponents touch the puck, the play would be whistled dead.

Interestingly, should a player on the non-offending shoot the puck in their own empty net, the goal will be rewarded to the opposition.

Meanwhile, a team may also pull their goalie because they are trailing on the scoreboard and are attempting to tie the game up.

You would typically witness a 6-on-4 or 6-on-3 situation when a team is already on the power play and they pull their goalie from the extra attacker.

The team is pulling their goalie likely because they are desperate for a goal, or maybe because of another delayed penalty yet to be called.

On a 4-on-3, both teams were given penalties, however the team with numerical advantage were called for one less infraction.

It’s also possible that one team has a numerical advantage due to pulling their goalie.

In any case, somewhere in that gameplay scenario a penalty was called.

These gameplay situations take place when both teams received one or more penalties. The infractions may have been called simultaneously or at various overlapping times.

It’s possible that one of the teams pulled their goalie during the penalty kill to play 4-on-4, but very rare. This would be the case at 3-on-3, because no team can ever be down three skaters.

How many players on the ice in overtime?

When teams finish the game off at even strength in regulation time, they begin overtime playing 3-on-3.

Under no circumstances are teams allowed to pull their goalie in the overtime period. Even on a delayed penalty call.

When a team is awarded a power play in overtime, they add a skater rather than their opponents removing one.

The gameplay scenarios are no different than that in regulation time. If you’d like to learn more about overtime rules, please check out my blog post here.