How Fast do NHL Players Skate? (and how to estimate speed) 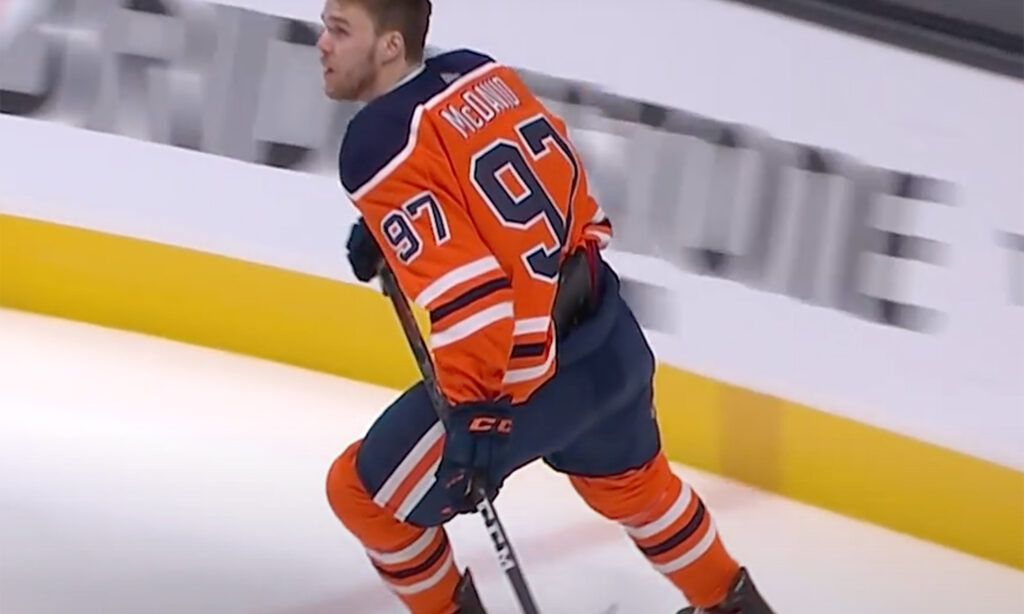 Hockey is famously known to be the fastest game on earth.

Part of that has to do with the shot speed, the quick passes and player maneuvering.

But the main reason for holding that title is because of the speed the players reach on the ice.

There is no other team sport where players accelerate and reach speeds at such high levels.

That includes the other big 4 which is comprised of Baseball, Basketball, Football and Soccer.

The reality is that all those sports consist of running.

But nothing comes off more dangerous than skating at high speeds on an elevated skate blade with a hard ice surface to break your fall.

So, what speeds are these players able to reach anyway?

How Fast do NHL Players Skate?

NHL players can skate in excess of 25mph or 40kph at their top speed. The average NHL player top speed lies in the 20-25mph range in an open stretch of ice, without the puck. The fastest hockey player on record is Matthew Barzal who completed the NHL Fastest Skater in the 2020 All-Star Skills Competition in 13.175s (average of 27mph or 43kph).

The lap around the rink is, at most, 159m or 522ft (source). The reason I say “at most” is because the player would need to hug the boards throughout the entire skate.

In reality, there is some leeway along the track demarcated by pilons on the faceoff circles and the space behind the net.

But based on the full lap distance, Barzal reached an average speed of 27mph or 43.45kph (source).

If you want to calculate the speed for yourself, here’s how it’s done:

When you watch the video, it’s easy to estimate he likely skated beyond that average speed, especially since he had to slow down on each of the turns.

Furthermore, he started the lap at a standstill

Barzal likely flirted with 30mph or more at his very top speed.

Keep in mind that players are able to skate faster without the puck rather than with it.

What sets Connor McDavid apart from all other players is his ability to outskate all his opponents while carrying the puck and them chasing.

How do NHL Players compare to Speed Skaters?

While players like McDavid and Barzal appear fast compared to their NHL colleagues, speed skaters are that much faster.

The record for the fastest speed set on skates was Kjeld Nuis from Sweden.

While this was not in an official skating competition, Nuis wanted to test the limits of his speed on skates.

The official fastest speed ever recorded in skating was clocked at 64mph or 103kph (source).

Nuis, himself, described the feeling as “flying over the ice” when he reached the top speed.

And while he believes it’s the fastest that can be achieved, he has beaten his own previous record of 58 mph (93kph) from a few years prior.

It would be real interesting for him to attempt another world record, but that remains to be seen.

As for NHL players, don’t expect to ever see any player hitting these epic speeds.

The reality is that hockey skates are not designed for speed the same way speed skates are made.

Moreover, the rink is too small for the players to accelerate any further.

Hockey players need to master skills other than speed.

While McDavid happens to really good and lightning fast, it’s not always a necessity to be a dominant player.

Players like Gretzky, Lemieux and Crosby are known better for their hockey IQ than they ever were for their speed.

They were able to excel by leading other facets of the game.

Which is why he’ll be remembered as the full package when it comes to hockey talent.

As for McDavid's chances of becoming the NHL's all-time scoring leader, don't count on it. I explain why not in my blog post here called Will Connor McDavid Catch Gretzky?