What does PIM mean in Hockey? 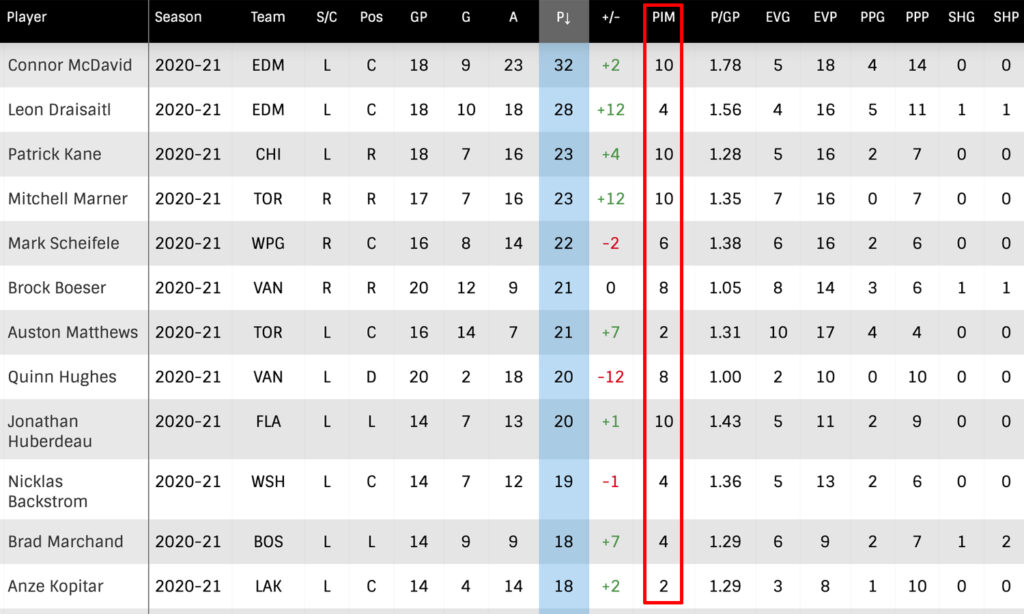 While scrolling through NHL player statistics, you’ll likely be looking at the scoring columns since player point totals generate the most interest.

However, there is one column dedicated to player punishment. That column is labeled as PIM – but exactly what does it mean?

What does PIM mean in hockey?

PIM stands for penalty minutes or, more specifically, penalty infraction minutes for hockey. Players, goalies or even the team can be assessed penalties during a game. Penalties can be 2 minutes (minor), 5 minutes (major) or 10 minutes (game misconduct) in length.

People also refer to PIM as penalty in minutes. Also, keep in mind that match penalties are not tallied to a player's PIM totals.

Types of Penalties and Length in Minutes (PIM)

Minor penalties are 2 minutes in length and represent the least severe penalty type assessed. Penalties that fall under this category include tripping, slashing, roughing, holding, interference, delay of game, high sticking and so on.

What’s unique about 2-minute minor penalties is that if the opposing team scores during the player’s tenure in the box (powerplay), the remainder of the penalty is nullified.

Even though the player leaves the penalty box earlier, their PIM stat totals will still reflect the full 2-minutes.

A double minor penalty is simply two 2-minute penalties assessed to the same player from the same play. This is usually from a high sticking play causing the opposing player to bleed.

When a player is assessed a double-minor, they must serve the entire 4 minutes unless a goal is scored on the powerplay. If the advantaged team scores during the first penalty, the powerplay clock is reduced to 2 minutes. Should they score again or during the second 2-minutes, the penalty is nullified.

Major penalties are 5 minutes in length and characterize a more serious offense such as boarding, cross-checking, spearing and so forth.

The most common major is usually attributed to players fighting, commonly referred to “5 for fighting”. However, since it takes two players to fight, the penalties would cancel each other off.

When a player receives a major, they must serve the full 5 minutes regardless of the penalized team being scored against.

Players that receive a 10-minute misconduct penalty must stay in the box for the full duration. There is no powerplay given to the opposing team unless the misconduct was accompanied by a minor or major penalty.

If a minor or major penalty was also given, another player must serve the time in the box for the offender. Meanwhile, the offender can only return to the ice once the 10 minutes have expired and after gameplay has been whistled dead.

For Match Penalties, the offending player is removed for the balance of the game. There’s no designated penalty minutes (PIM) for a match penalty.

Occasionally, us fans are treated to a call by the referee that leads to a penalty shot. Typically, a penalty shot is granted when the defending team prohibits a player from shooting on the goalie who otherwise had a clear path to the net.

The other known play where a penalty shot can be awarded is if the defending team player (aside from the goalie) freezes the puck in the crease.

When a penalty shot is awarded, the penalized player will not incur any PIM to their stats.

When the NHL was founded in 1917-18, players could be assessed a 3-minute penalty (minor) or 5-minute penalty (major). At the time, the player was removed from play for the duration, but teams were not required to play shorthanded. That is, the punished player was replaced by another player from their team.

By the 1918-19 NHL, rules were amended that the penalized player could not be replaced, and the opposing teams were awarded powerplays for minor and major penalties. As a note, the penalized players were required to serve the full length of the infraction regardless of goals scored.

In 1921-22, minor penalties were reduced from 3 minutes to 2 minutes. The 1923-24 season introduced match penalties where the team must play shorthanded for the length of that period.

And it wasn’t until the 1956-57 season where players serving a minor penalty were allowed back on the ice following a powerplay goal. This change stems from a game in which the Montreal Canadiens Jean Beliveau managed to score a hat trick on the same power play. The powerplay was a result of a 2-minute minor infraction, in which it took Beliveau only 44 seconds to score three goals.

Who serves a goalie’s PIM?

If you didn’t know, goalies do not get sent to the penalty box for minor or major penalties. The only way for them to be removed from the ice is by getting called for a game misconduct.

So, when a goalie gets called for a penalty, the coach must designate a skater to serve the infraction time in the box. This is the same approach for a bench team penalty –  such as an unsportsmanlike infraction called against the coach.

As a note, the NHL does keep the stats for penalty minutes assessed to goaltenders. See below the list of the top 10 penalized goalies of all time:

In case you wanted to know, below is a list of the top 10 leaders for NHL penalty minutes. Glossing over the list, I remember most of these players for getting into fights and more than a fair share of game misconducts.

Bottom line is that many of these players were designated team enforcers to protect their star players. A great example is Marty McSorley, who went from the Edmonton Oilers to the Los Angeles Kings in the trade deal that involved the Great One, Wayne Gretzky.