What is Cross Checking in Hockey? 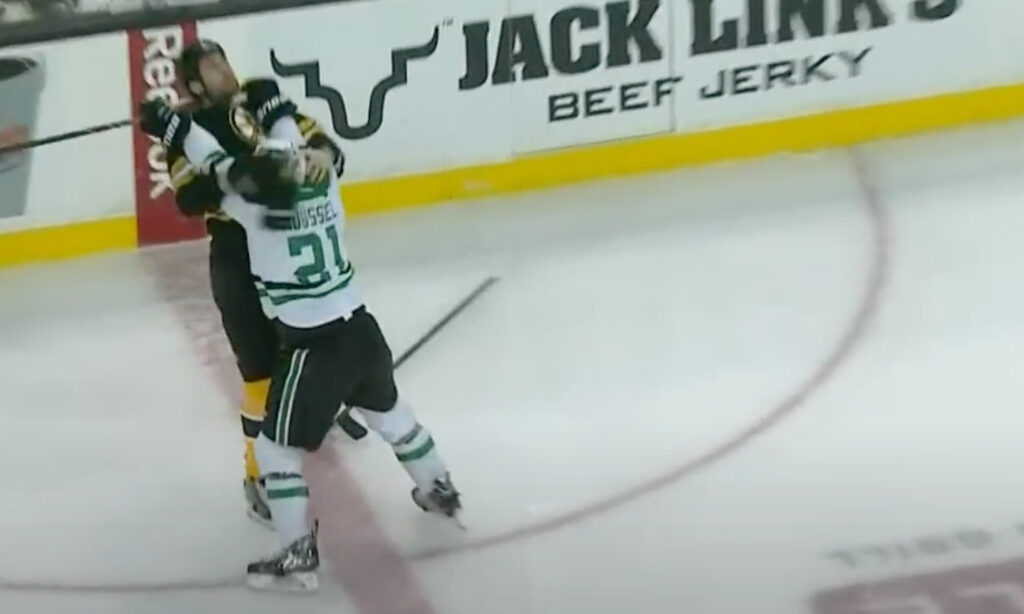 When it comes to hockey, there are rules in place related to stick use and etiquette.

For example, you cannot play the puck above your shoulders with the blade of your stick. This is known as “high-sticking” the puck.

The referee would immediately blow the play dead on subsequent touch by anyone on your team.

But what about using your hockey stick to make contact with an opponent?

The short answer is, you cannot leverage your hockey stick to hook, trip or injure a player in any way to gain an advantage on a play.

Another such instance of illegal use of the stick is cross checking. This is outlined in the NHL Rulebook (source – see Rule 59)

We’ll break down how the league handles cross checking incidents, but let’s first answer the question at hand…

What is cross checking in hockey?

Cross checking is the act of forcefully hitting an opponent with the stick shaft using both hands. The portion of the shaft making contact with the player is perpendicular to their body, resembling the shape of a cross. The penalty assessed by the referee is based on the severity of the contact.

To give you a visual of the act of cross checking, see the image below.

There are many things to consider when it comes to calling a penalty for cross checking. Where was the contact with the stick shaft made? On the back, chest, arm or head?

Also, how vulnerable was the other player when the contact was made? Did they dangerously slam into the boards?

But more importantly, was there intent to injure or did the player suffer an injury as a result?

These details will help the referee determine the severity of the penalty call to be made and if supplementary discipline is required.

A cross checking play with no intent to injure or doesn’t result in an injury will lead to a minor penalty (2 minutes).

59.2 Minor Penalty - A minor penalty, at the discretion of the Referee based on the severity of the contact, shall be imposed on a player who “cross checks” an opponent.

You typically witness this type of contact happen in front of the net when players are battling for position.

Sometimes, the defenseman delivers a cross check to prevent the opponent from screening their goalie or jump on a loose puck.

Other times, you’ll see the opposition cross check the defenseman to create more space and time for themselves. Possibly to deflect a shot from the point, scoop up an open rebound, or anything that can help them score.

A major penalty for cross checking is called when the offender intended to or purposely injured the player.

If a major penalty is called, the offender is automatically assessed a game misconduct as well. The player is removed from play for the remainder of the game while a teammate must serve their 5-minute major penalty.

Furthermore, the player is automatically fined a $100 for the offense.

59.3 Major Penalty - A major penalty, at the discretion of the Referee based on the severity of the contact, shall be imposed on a player   who “cross checks” an opponent.

59.5 Game Misconduct Penalty - When a major penalty is assessed for cross-checking, an automatic game misconduct penalty shall be imposed on the offending player.

If you'd like to learn more about minor and major penalties and how the opposing teams are rewarded a power play, make sure to check out my blog post here on What is a Power Play in Hockey?

A match penalty for cross checking is similar to a game misconduct in that the offender will be removed from play for the remainder of the game.

However, it is imposed when the offender showed intent to injure. The player is suspended indefinitely until the reviewed by the Commissioner.

59.4 Match Penalty – The Referee, at his discretion, may assess a match penalty if, in his judgment, the player attempted to or deliberately injured his opponent by cross-checking.

In either case (game misconduct or match penalty), the player is charged on record with a 10-minute penalty.

They can also incur a fine and suspension if decided upon by the Commissioner following the review of the cross-checking incident.

In the clip below, Antoine Roussel delivered a cross check to the head of Adam McQuaid. At the time, Roussel was given a 5-minute major and a game misconduct.

Following a review by NHL Department of Player Safety, Roussel also received a two-game suspension and was fined just over $21,500 USD.

As mentioned earlier, you’ll often catch a cross check when two players are battling for position in front of the net.

However, not every shot to the back is considered a cross check, at least from the referee’s perspective.

Sometimes, might appear as a cross check to the back, is simply a hard two-handed shove without the shaft being drilled into the player.

In fact, the play may be whistled down for interference rather than a cross check.

But there are times when players complain that the referee missed out on a call.

In the highlight clip below, you will catch Auston Matthews getting hit in the back 3 times. While the first two look like shoves, the last would usually be considered a cross check.

But this video was to illustrate the difference between a two-handed shove and an actual cross check.

Matthews did address this incident after the game, calling for more consistency from the referees and the league. Needless to say that when your star players are speaking out, the higher ups in the league are listening.

When a cross checking penalty is being called, the referee will signal the infraction to the off-ice officials and spectators by the timekeeper box.

The gesture they make resembles the actual motion of the cross check itself. The referee will clench his fists shoulder-width apart, extending his arms about 1 foot from his chest.