What is Boarding in Hockey? 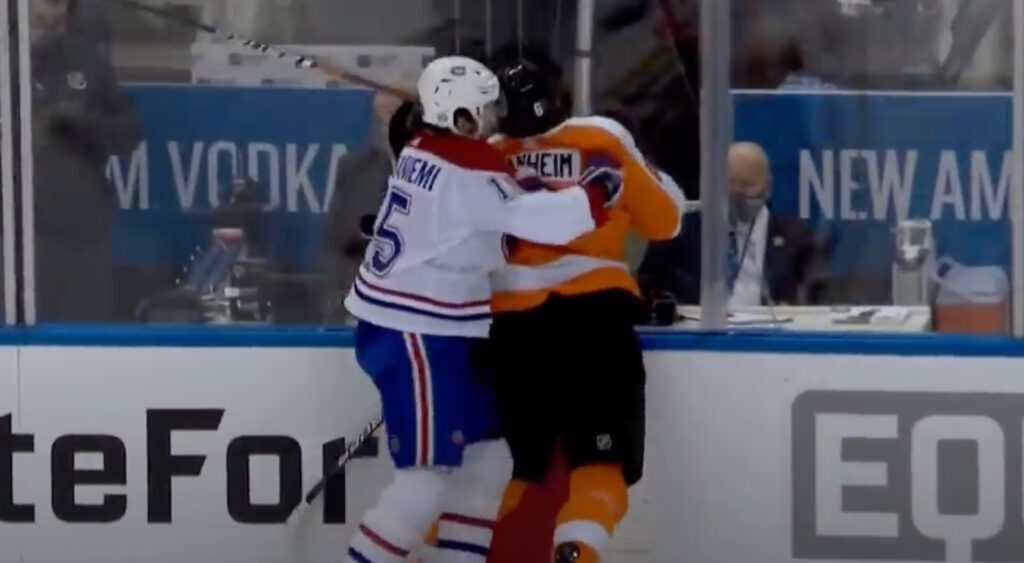 In hockey, checking is defined as defensive technique used to disrupt or separate your opponent in possession of the puck.

Body contact is a legal form of checking in professional hockey leagues, including the NHL. But there still are rules for body checking that all players must adhere to.

For example, due to the long-term effects of concussions, checks to the head are now a punishable offense. Not only could players be ejected from the game, they may also receive further discipline (i.e. suspension) or fines.

However, illegal checks are not limited to contact to the head. If you hit another player in a vulnerable position, regardless of the point of contact, the referee will call a penalty.

Boarding is a clear instance of a dangerous, illegal check.

What is boarding in hockey?

Boarding is the act of pushing, tripping or checking a defenseless player violently into the boards. The offender will often accelerate and drive the player hard into the boards with no real intent on playing the puck. If the play results in an injury, a major penalty will automatically be called. Otherwise, the offending player will only receive a minor penalty.

A defenseless player is characterized as a player who no longer has control of the puck or has their back facing the offender.

The referee would call a boarding penalty if contact was made to the head or if the player went in face first to the boards.

Otherwise, if the recipient is expecting and facing the opponent while getting hit along the boards, it would be deemed a legal body check.

Another rule of thumb is that if you see numbers while checking the player along the boards, you are guilty of boarding.

And when we say “numbers”, we are referring to the back of a player’s jersey.

If the recipient sustains an injury, it doesn’t just end with a major penalty and a 5-minute power play for the opposition.

We break it down in the following segment, comparing various outcomes from a boarding play.

A boarding play with minimal level of violence will lead to a minor penalty (2 minutes).

The NHL rulebook describes a minor boarding penalty as follows:

41.2 Minor Penalty – The Referee, at his discretion, may assess a minor penalty, based on the degree of violence of the impact with the boards, to a player guilty of boarding an opponent.

I provide an example of a minor boarding call involving Max Pacioretty and Ryan McDonagh on video.

You’ll notice that McDonagh did suffer an injury on the play, but the referee didn’t deem the check to be excessively violent.

It was likely determined that McDonagh turned his back on Pacioretty knowing that he was approaching. This may have played a factor in deciding on calling a minor penalty only.

As also stated in the rulebook, the onus is also on the recipient to not place themselves in a vulnerable position when the check is imminent.

A boarding play with more severe repercussions from the impact will lead to a major penalty (5 minutes).

As described by the NHL:

41.3 Major Penalty – The Referee, at his discretion, may assess a major penalty, based on the degree of violence of the impact with the boards, to a player guilty of boarding an opponent.

Unlike a Cross Checking Major, boarding doesn’t automatically result in a game misconduct. The recipient must have sustained an injury to the face or head to reach that level.

As a result, the offending player will return to the ice following a full 5 minutes in the box.

A game misconduct is imposed to the offending player when the recipient sustains an injury to the face or head along with a boarding major called.

41.5 Game Misconduct Penalty - When a major penalty is imposed under this rule for a foul resulting in an injury to the face or head of an opponent, a game misconduct shall be imposed.

The player is removed from play for the remainder of the game while a teammate must serve their 5-minute major penalty.

In the video below, the referee charged Jesperi Kotkaniemi (Montreal Canadiens) with a boarding major and game misconduct for his check on Travis Sanheim (Philadelphia Flyers).

In this case, the referee selected to review the play and determined that the boarding play was excessively dangerous.

A match penalty is called when the referee determines the boarding play was delivered with intent to injure.

41.4 Match Penalty – The Referee, at his discretion, may assess a match penalty if, in his judgment, the player attempted to or deliberately injured his opponent by boarding.

When a match penalty is called, the player is automatically removed from the game and suspended indefinitely until the reviewed by the Commissioner.

The offending player will incur a fine and possible suspension, especially with a history of other incidents.

Lastly, any unnecessary check delivered against the boards on an expected icing or offside play will automatically result in boarding penalty - regardless of the level of violence.

The offender isn’t allowed to deliver a body check when the play is expected to be blown dead.

When a boarding penalty is being called, the referee will signal the infraction to the off-ice officials and spectators by the timekeeper box.

The gesture involves striking a clenched hand against the other that is open-palmed at chest level.