What is Slashing in Hockey? 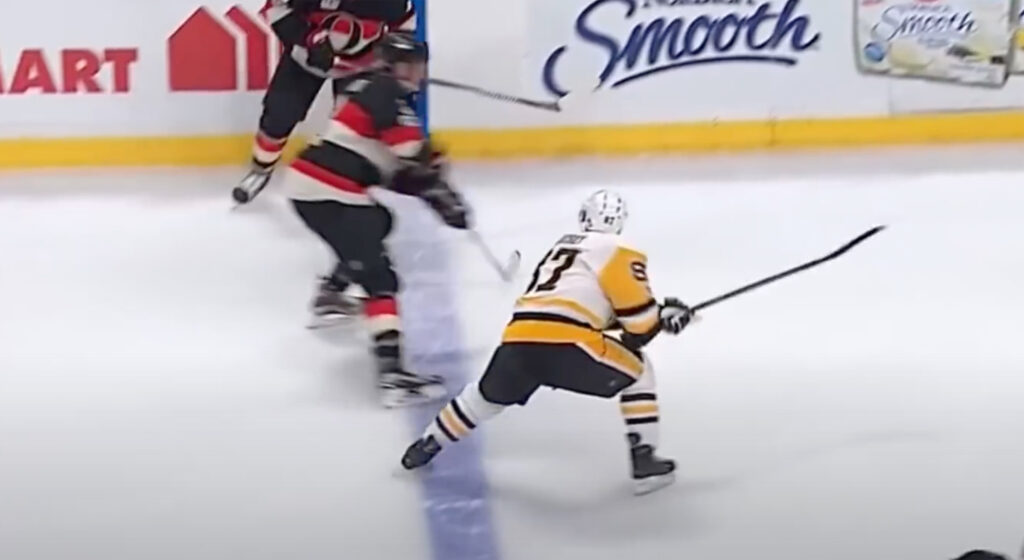 Stick checking is a defensive technique used to separate your opponent off the puck.

Two of the most common types of stick checks include the poke check and the lift check.

Poke check is the gesture of shoveling the blade of your stick towards the puck carrier’s stick and knocking the puck out of their possession.

Lift check is the gesture of using your blade and stick shaft to lift the opponent’s stick from underneath and remove their control of the puck.

But while stick checking is a legal part of the game, there are limits to how you can use the stick. For instance, you cannot use your stick, in any way, as a weapon.

Slashing is an example of how sticks can be used in a violent manner.

What is slashing in hockey?

Slashing is the act of swinging the hockey stick in an axe-like motion towards an opponent, regardless if contact is made or not. The stick foul involves making direct contact or gesturing a forceful chop against the recipient’s body or stick.

According to Rule 61 in the NHL Rulebook, a slashing penalty will only be imposed if the slash is deemed to be violent and especially if the offender doesn’t have any intent on playing the puck.

You will also get a penalty for slashing a player who is not in possession of the puck or completely away from the play.

The referee will even call an infraction if the slash results in breaking the opponent’s stick shaft.

In the next segment, we cover the different degrees of slashing and what calls to expect the referees to make.

A slashing play with minimal level of violence and which doesn’t result in an injury will lead to a minor penalty (2 minutes).

You’ll often see a minor call for slashing that lead to a broken stick shaft, since the recipient likely did not sustain an injury.

Otherwise, a light whack across the body, leg or hands is also grounds for a 2-minute penalty.

The NHL describes a Minor Slashing penalty as:

61.2 Minor Penalty - A minor penalty, at the discretion of the Referee based on the severity of the contact, shall be imposed on a player who slashes an opponent.

A major penalty for slashing is called when the offender intended to or purposely injured the player.

This can be the result of a hard slash across any part of the body causing the player to suffer pain and sustain an injury.

The NHL describes a Major Slashing penalty as:

61.3 Major Penalty - A major penalty, at the discretion of the Referee based on the severity of the contact, shall be imposed on a player who slashes an opponent. When injury occurs, a major penalty must be assessed under this rule.

Similar to a cross checking infraction, if a major penalty is called, the offender is automatically assessed a game misconduct too. The player is removed from play for the remainder of the game while a teammate must serve their 5-minute major penalty.

61.5 Game Misconduct Penalty – Whenever a major penalty is assessed for slashing, a game misconduct penalty must also be imposed.

A game misconduct is imposed to the offending player when the recipient sustains an injury to the face or head along with a boarding major called.

41.5 Game Misconduct Penalty - When a major penalty is imposed under this rule for a foul resulting in an injury to the face or head of an opponent, a game misconduct shall be imposed.

The player is removed from play for the remainder of the game while a teammate must serve their 5-minute major penalty.

In the video below, PK Subban (Montreal Canadiens) was guilty of slashing Mark Stone (Ottawa Senators) and assessed a major penalty and game misconduct.

Mark Stone was said to have sustained a micro-fracture to his wrist upon further inspection.

A match penalty is reserved for situations where the offender showed intent on injuring the other player. This is most obvious when the recipient is not even in possession of the puck and the offender is demonstrating aggressive behavior.

The rulebook states a Match Penalty as:

61.4 Match Penalty – The Referee, at his discretion, may assess a match penalty if, in his judgment, the player attempted to or deliberately injured his opponent by slashing.

Penalty Shot and Awarded Goals from a Slashing Play

A penalty shot is awarded to a player when they have a clear path to the net, get slashed and are prevented from seeing the play through.

In other words, if the player is prevented from shooting the puck due to the slash, the referee will award a penalty shot.

As a note, if the player recovers from the slash and manages to shoot on net, the referee will call a slashing penalty instead.

And should this happen when the opponent’s net is empty, the referee will automatically award the goal to the team of the slashed recipient.

When a slashing penalty is being called, the referee will signal the infraction to the off-ice officials and spectators by the timekeeper box.

The gesture involves an up-to-down chopping motion with one hand across the forearm of the other.