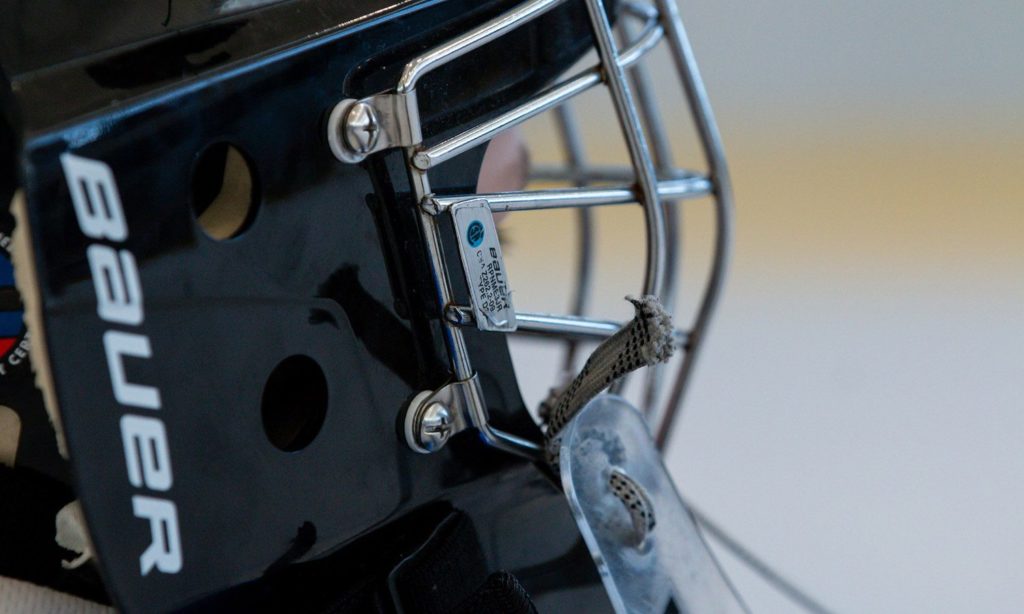 So, you’re looking to join a ball hockey league in Ottawa.

You and your friends are ready to put a team together for the new year.

Are you looking for a friendly or competitive league?

Do you want to play closer to your home or work place?

How about wanting to join a coed league, playing outdoors under the summer sun or trying out those fancy dek hockey rinks?

Well, you’re in luck as we have a solid list of 13 ball hockey leagues in Ottawa and greater areas.

Anywhere from Kanata in the west, to Orleans in the east, central Ottawa, south side and north of the Ottawa River (Gatineau) – we’ve got you covered.

Furthermore, you can join either in the summer or fall for most leagues – including some that offer spring and winter seasons (January).

Leagues are ordered by size (team & division count) and include the relative areas where games are hosted. This is to help simplify the decision-making process, unless you want to join more than one.

Once you've reviewed the list, you can register to your preferred league(s) with the submission form below.

When it comes to Ball Hockey, you'll want to take a look at Hat Trick Ball Hockey League, wherever you live in Ottawa.

The league has over 190 teams and 25 divisions annually catering to various male and coed divisions. You can choose between 4-on-4 or 5-on-5 game play.

In addition, you can register for a division suited close to your location. That is, some of the divisions play games in specific areas of Ottawa - East, West or Central.

The league holds annual tournaments and pick-up games in case you cannot commit for the season.

You can visit their website for details on individual stats, standings, all-time leaders and contact information (for registration). Just tap on the league name above. 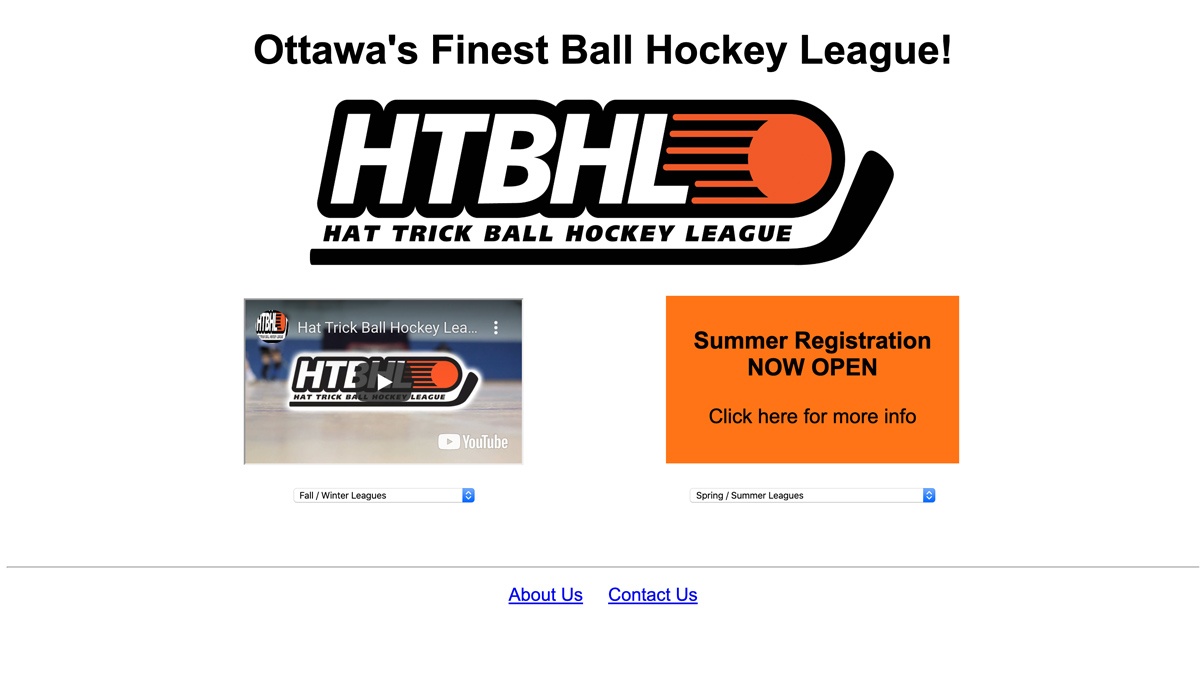 Top Dek Gatineau is an excellent league for those that live just across the Ottawa River in Gatineau.

The league is made up of 130+ teams annually split in 20+ divisions. You or your team can register for either the summer or winter season.

All games are played at the Top Dek Gatineau location which consists of an indoor rink specifically made for ball hockey (or dek hockey).

The Ottawa Blues Ball Hockey Association is made up of 100+ teams annually split into 20+ divisions.

The league offers 4-on-4 play and caters to male, female and coed divisions.

All games are hosted at the École Secondaire Catholique Franco-Cité in Riverview Park, Ottawa.

Lastly, you should visit their website for both individual and team registration. There you can also see individual stats, standings and past divisional champions. 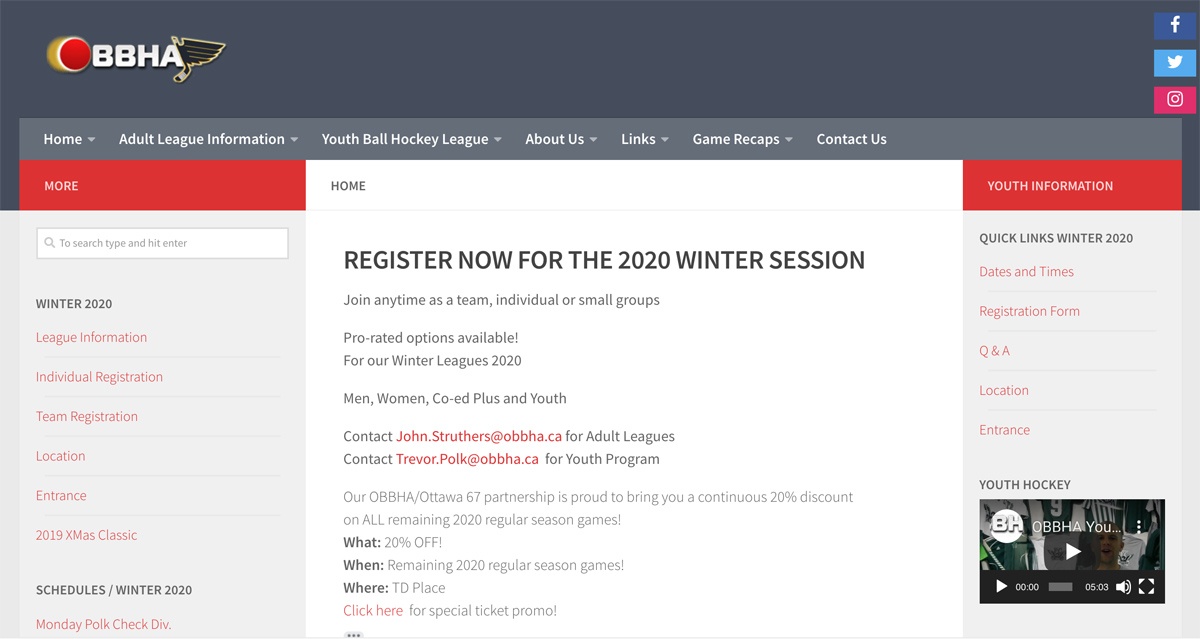 The LNO Dek league is a ball hockey league hosted at the state of the art Complexe Branchaud-Brière in Gatineau.

As in the name, the games are played on an indoor DEK surface made uniquely for ball hockey.

They offer both a summer and winter season catering to 19+ and 40+ men divisions. 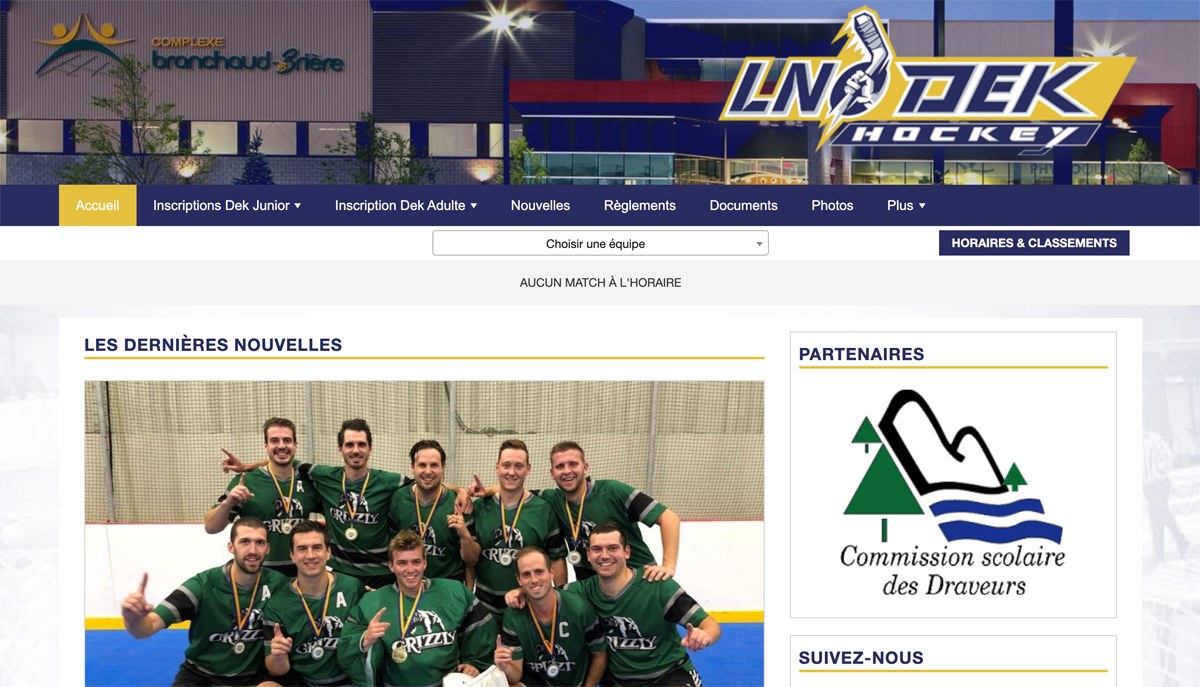 Games are played in various gymnasiums in Ottawa's East End. You'll be added to one of 3 divisions that play on Mondays, Wednesdays or Fridays.

During the summer season, those divisions play either on Wednesdays or Fridays.

In case you cannot commit for the full season, you can play in their pickup league offered on Thursdays during fall-winter.

Lastly, you can visit their website for details on registration, standings and league rules pertaining to coed play. 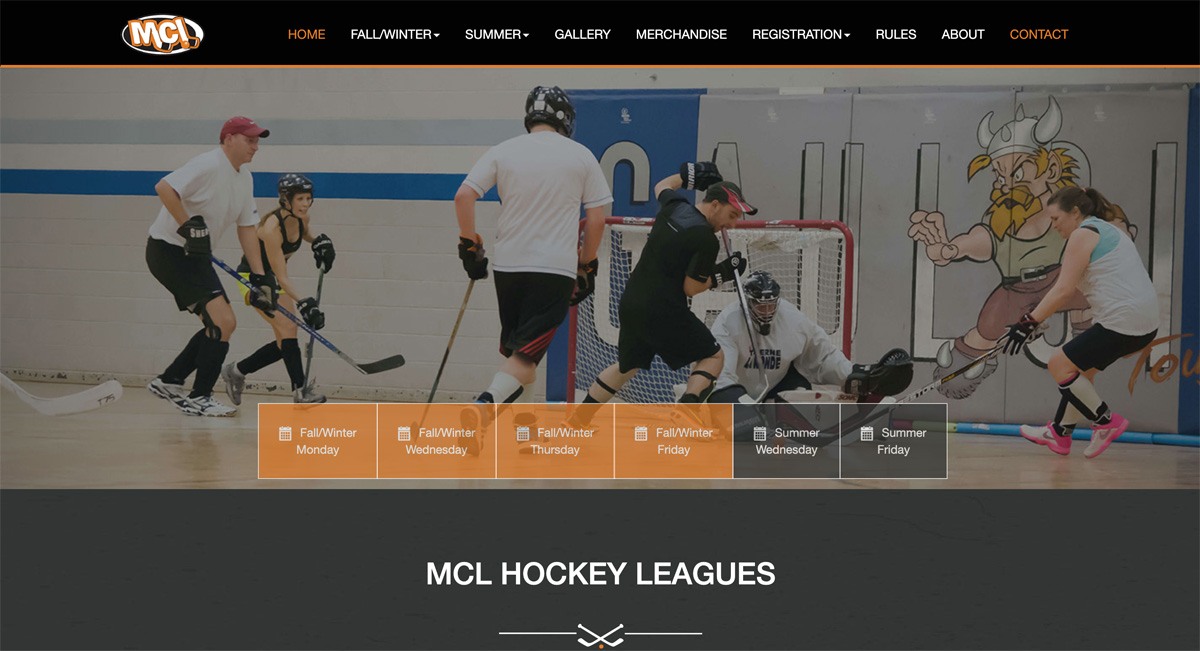 The RA Ball Hockey League is one of the many sports offered by the RA Sports Leagues which is a not-for-profit organization in Ottawa.

The league offers both 3-on-3 and 4-on-4 play catering to coed teams. You or your team can register to play for any of their 4 seasons.

Games are played in the RA Centre West Gym in the Fall & Winter and the RA Curling Club (Arena) during the Spring & Summer.

The league is made up of 25+ teams annually split in 5 divisions.

Check out there website for the latest stats and standings.

The Dek Hockey Rideau Sports Centre is a ball hockey league played on the popular DEK sports tiles in the outdoor.

As a result, the league is only operational during the summer months only and caters to male, female and coed divisions.

Located at the Rideau Sports Centre in downtown Ottawa, teams either play 3-on-3 or 4-on-4.

Furthermore, they also offer pick-up games for those that cannot commit to a full season.

Stats and standings are regularly tracked on their website. You can even see their pricing structure for both individual and team participation. 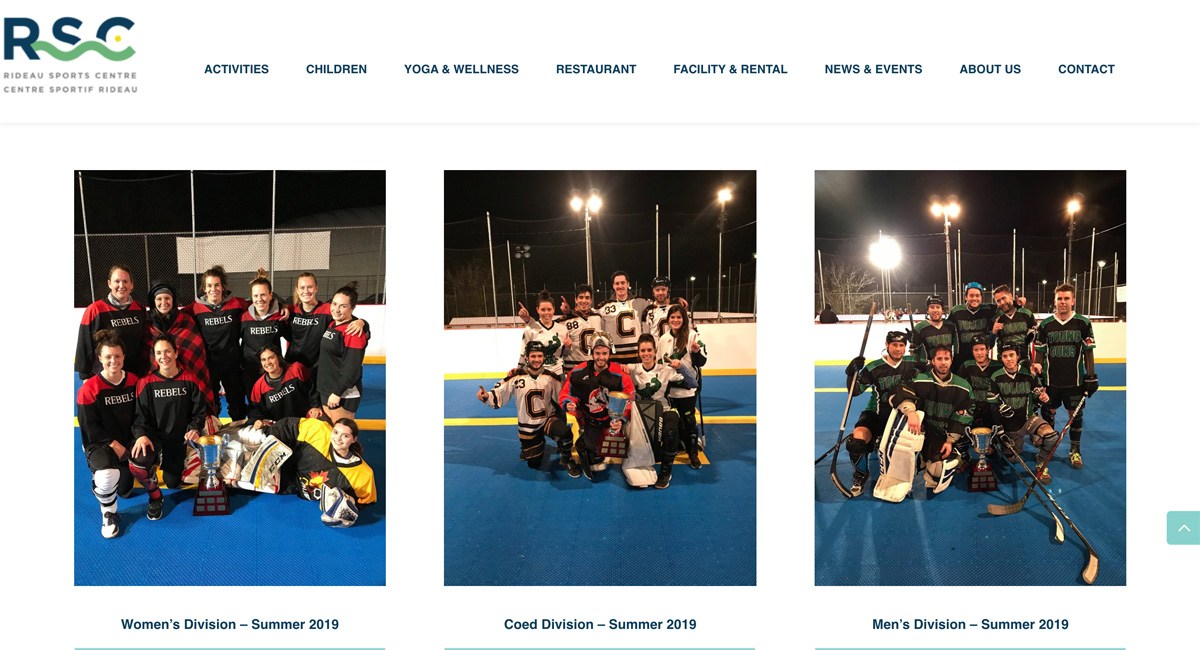 The Greater Ottawa Ball Hockey Association is a league that runs 3 divisions during the Spring-Summer season (April to July).

The league is made up of over 20 teams and gameplay is 5-on-5. They've been in operation for over 19 years hosting games in various location across Ottawa.

Lastly, you can visit their website for the latest stats and standings or if you want to contact for registration details.

If you live in South Ottawa, the Original Four Ball Hockey League should be your go-to ball hockey league.

All game are played at the Heron Road Community Centre (Gymnasium) and teams are made up of male and female players (coed).

Every fall, the league hosts a draft and players are sorted in either their higher or lower divisions based on player skill levels.

Lastly, make sure to check out their website for the latest stats, standings and weekly highlights.

If you're looking for an all-women league, look no further than Ottawa Vanier Women's Ball Hockey League.

The league operates during the summer only and is made up of 2 divisions - competitive and friendly. Gameplay is 5-on-5.

Furthermore, all games are scheduled at the Bernard Grand Maître Arena in Vanier.

Also, you can visit their website for the latest individual stats, standings, rules and registration info.

This indoor rink made up of the special sport tiles best suited for smooth ball hockey play.

The LHAO offer 3x3 gameplay during the winter season. Currently, they have 14 teams participating in a single division.

Visit their website for details on stats, standings and registration for the Fall-Winter 2020 Season. 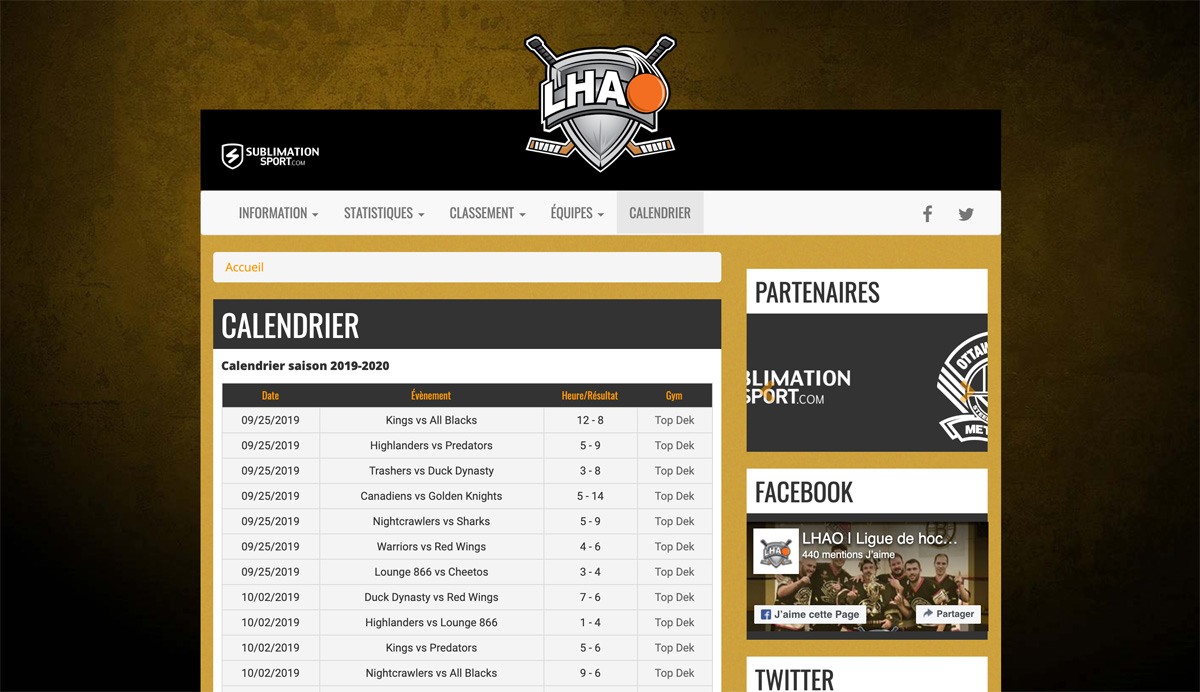 For those that live in Barrhaven, you may want to check out the Capital City Ball Hockey League (CCBHL).

The CCBHL hosts all their games at the St. Emily School gymnasium with premium start times (8:10 or 9PM)

Teams are made up of both males and females with 4x4 gameplay.

The Ottawa Sport & Social Club is a non-profit organization serving the community of Ottawa. As part of their adult curriculum, they offer various sports league to join - including floor hockey and DEK hockey.

Their ball hockey league is made up of different divisions including Friendly (non-competitive), 35+ Division, DEK 4-on-4 and more.

Participants can register to play in the summer, fall or winter. Most of the divisions are played in a gymnasium, however their Dek league is played on outdoor sport tiles.

Venue locations may vary, but players can decide to play in the Ottawa or Orleans area.

Make sure to visit the website for registration details. You can join individually, with friends or field your own team.

As you can see, there are plenty of ball hockey leagues to join in Ottawa.

Whether you like playing in a gymnasium or rink, for fun or competitively, you're guaranteed to find a league that meets your needs.

Again, remember that most leagues offer both summer and fall seasons. Just make sure to reach out to league organizers 2 months in advance.

We're now February (2020), and leagues have already started promoting their summer season (starting in April or May).

The same applies for Fall - reach out to them starting in July and you'll be set.

We researched these leagues thoroughly so that you didn't have to yourself.

Also, we didn't want you to settle on a league that requires long commutes across the city.

So if you know of any leagues that were left out, please comment below.

We'd be glad to add them to a future revision.