How Most NHL Goals are Scored (Shoot More Like This) 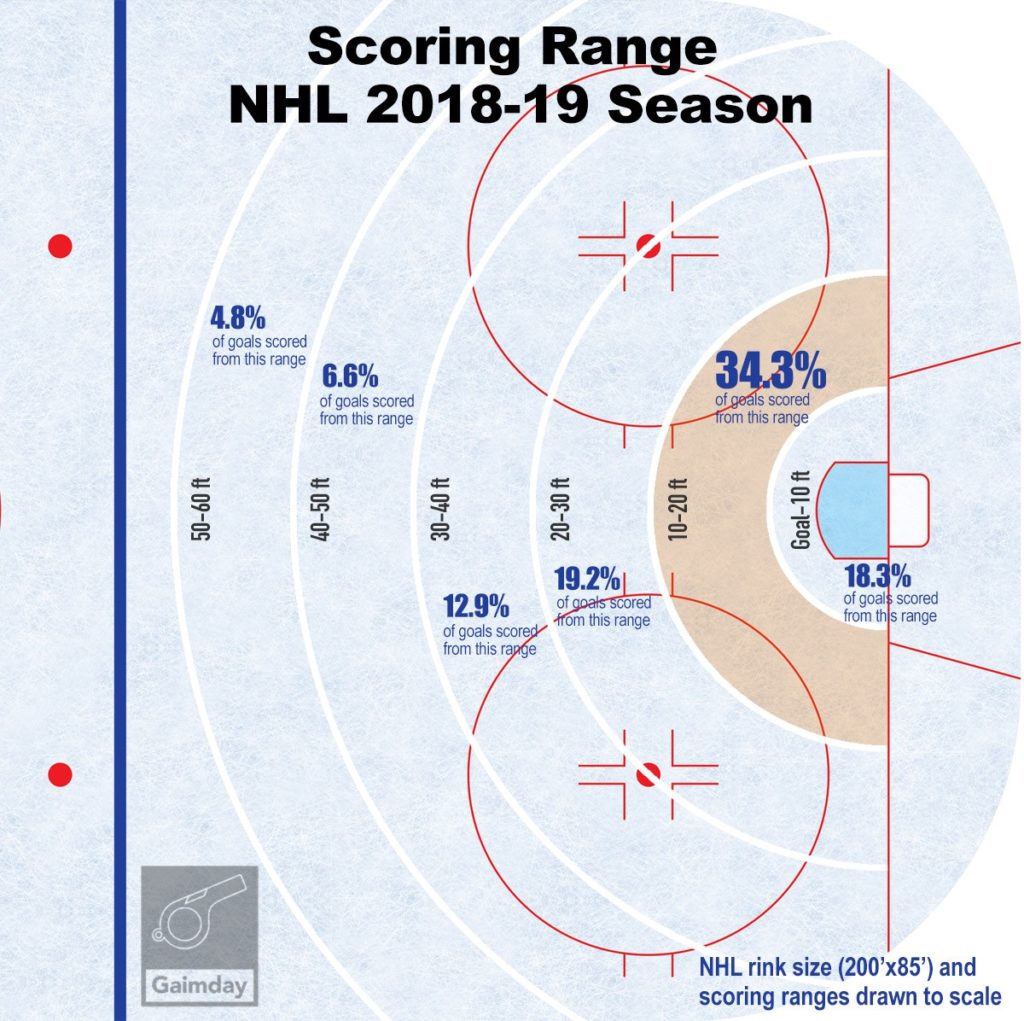 There were 732 different players who scored last season, led by Alex Ovechkin with 51 goals.

If you’re avid hockey fan, you already know how Ovechkin scores the bulk of his goals – on the powerplay, between the point and high circles, off-wing on the left-hand side with his one-time slapper.

You’d also know that he has the best chance of breaking Wayne Gretzky’s NHL record of 894 goals from all currently active players.

So, does it mean that the slap shot is the best way to score goals at the NHL level?

Well, let’s make one thing clear from the start – the answer does NOT entail an “it depends” response.

In fact, the ideal shot dominates goals scored anywhere from the goal line up to 50 feet away. Beyond that (50-60 feet range), its an extremely close 2nd place.

For perspective, the shortest distance from the blue line to the net is 64 feet and 70+ feet by the boards.

So, what is the ideal shot? Or better yet, let’s ask the question this way...

How are most NHL goals scored? 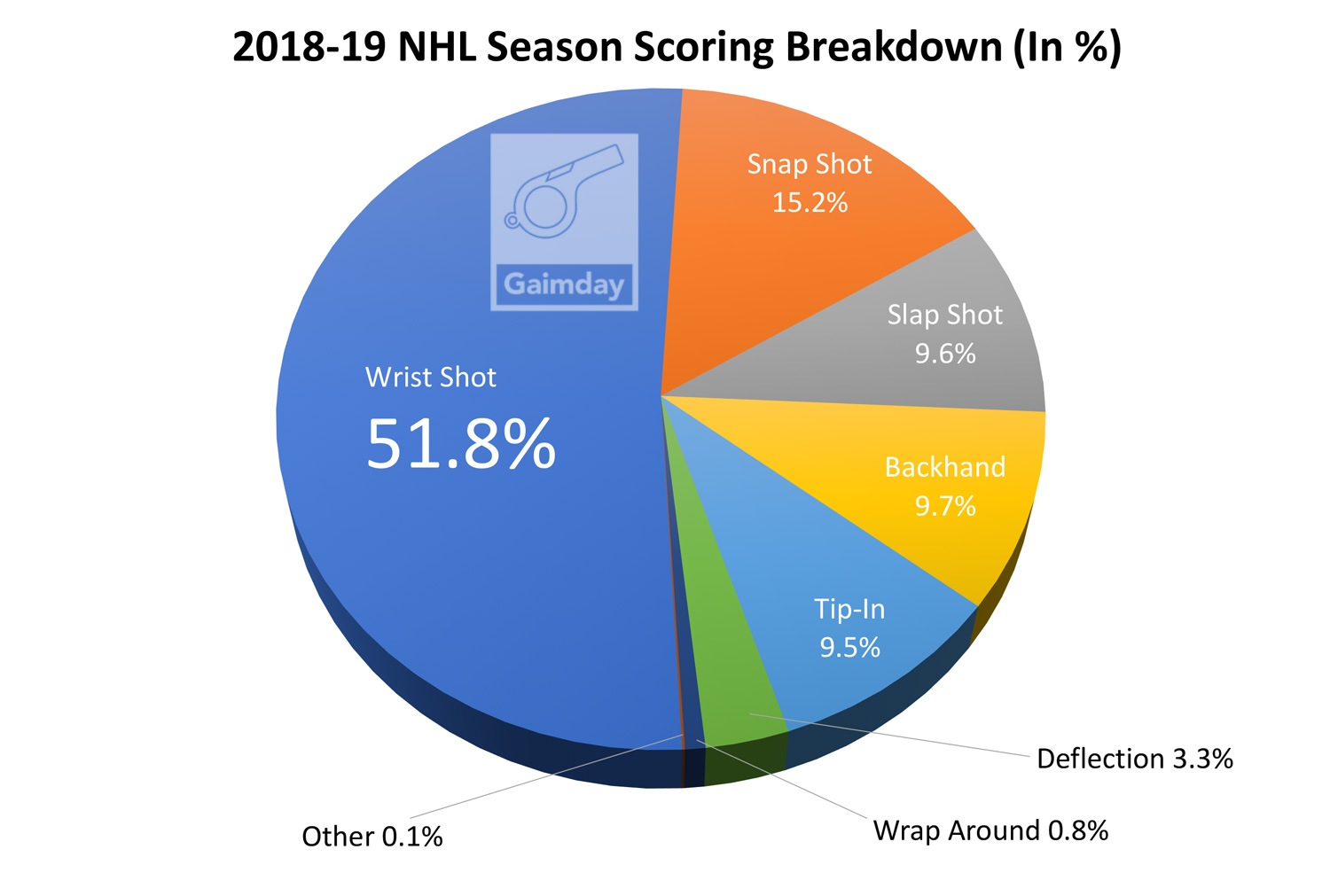 Now let's dive into why the wrist shot owns the majority share of NHL goals.

And by the way, this is not a one off, you can see a study here from 2015-16 NHL Season with similar results. (Just note that the hockey rink and ranges are not drawn to scale - for example, the face-off circles are way too high.)

It turns out that 44027 of those were wrist shots - which equates to 55.0% of all successful shots on net. Clearly, the wrist shot dominates the game and shot selection by most, if not all, players. 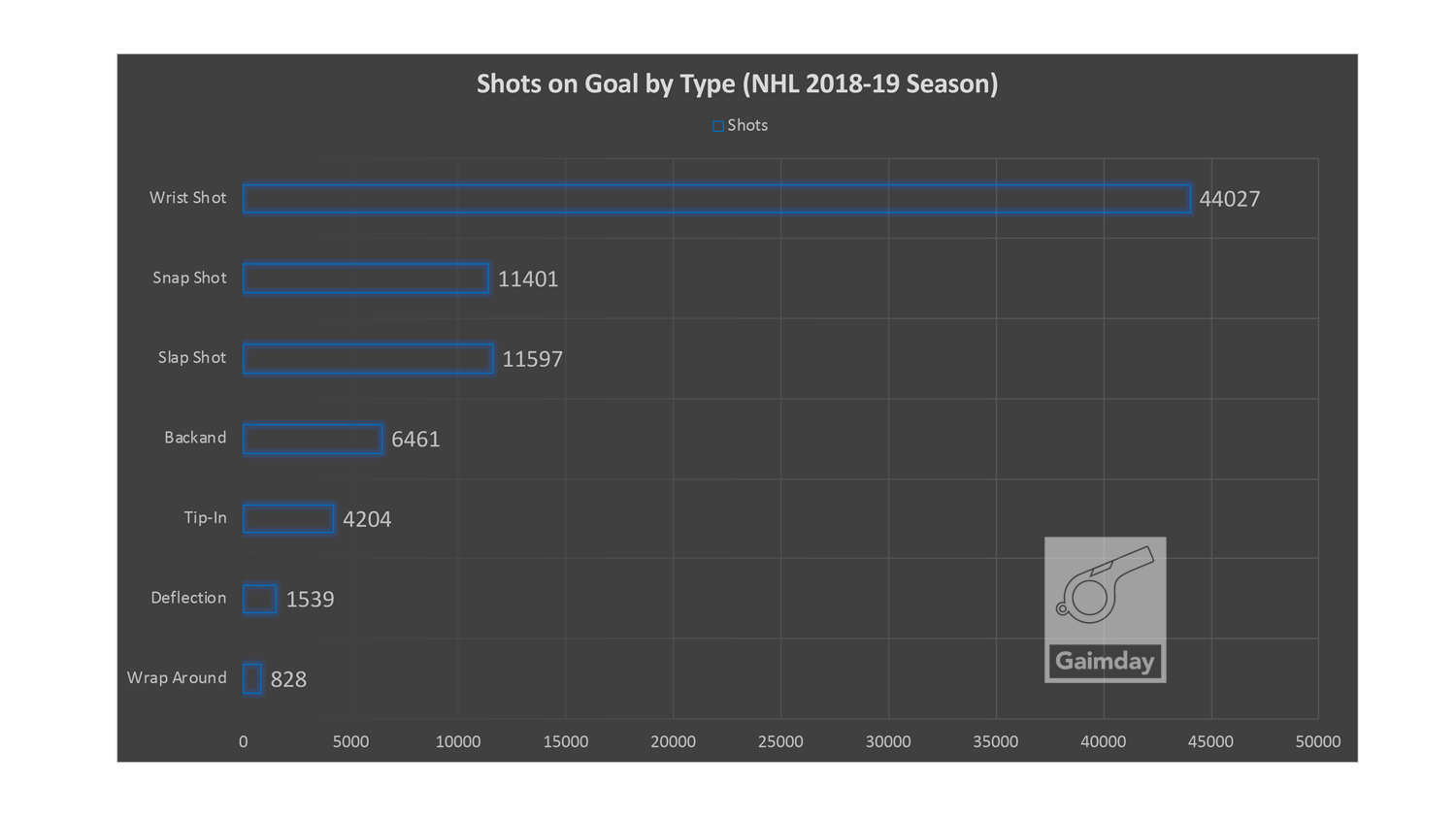 And as any player would know, professional or amateur, the wrist shot is the quickest and easiest way to shoot the puck while in the offensive zone.

It's the first shot we're taught in hockey at a young age. I remember my coaches teaching me to master elevating puck off the ice during practice and scrimmages. Same went for the backhand.

When it came to slap shots and snap shots, I started practicing those at the outdoor rinks on my own. Clearly, the coaches knew something that I didn't back then. Those shot types are good to have in your arsenal, but not necessarily key to better scoring abilities.

Slap shots and snap shots did become more common, as I and everyone else got older. For starters, once kids reach about the age of 15, they grow taller and develop more strength - making more difficult shots a whole lot simpler to carry out.

When are slap shots most effective?

Even though you can get more power and speed off the slap shot, you'll need more time and space to execute. Slap shots require a wind-up and the puck to lay exposed on the ice surface - which an opponent can poke check, steal or interrupt if they're close by.

When players are in the slot area, they're almost guaranteed to be swarmed by the opposition before executing such a slow releasing shot.

The best place to take a slapper is anywhere from 40-60 feet from the net - close to the points.

In fact, slap shots have the highest success rate (42.6%) of goals from the 50-60 foot range. Just keep in mind that only 4.8% of all goals are scored from that distance - not a whole lot. 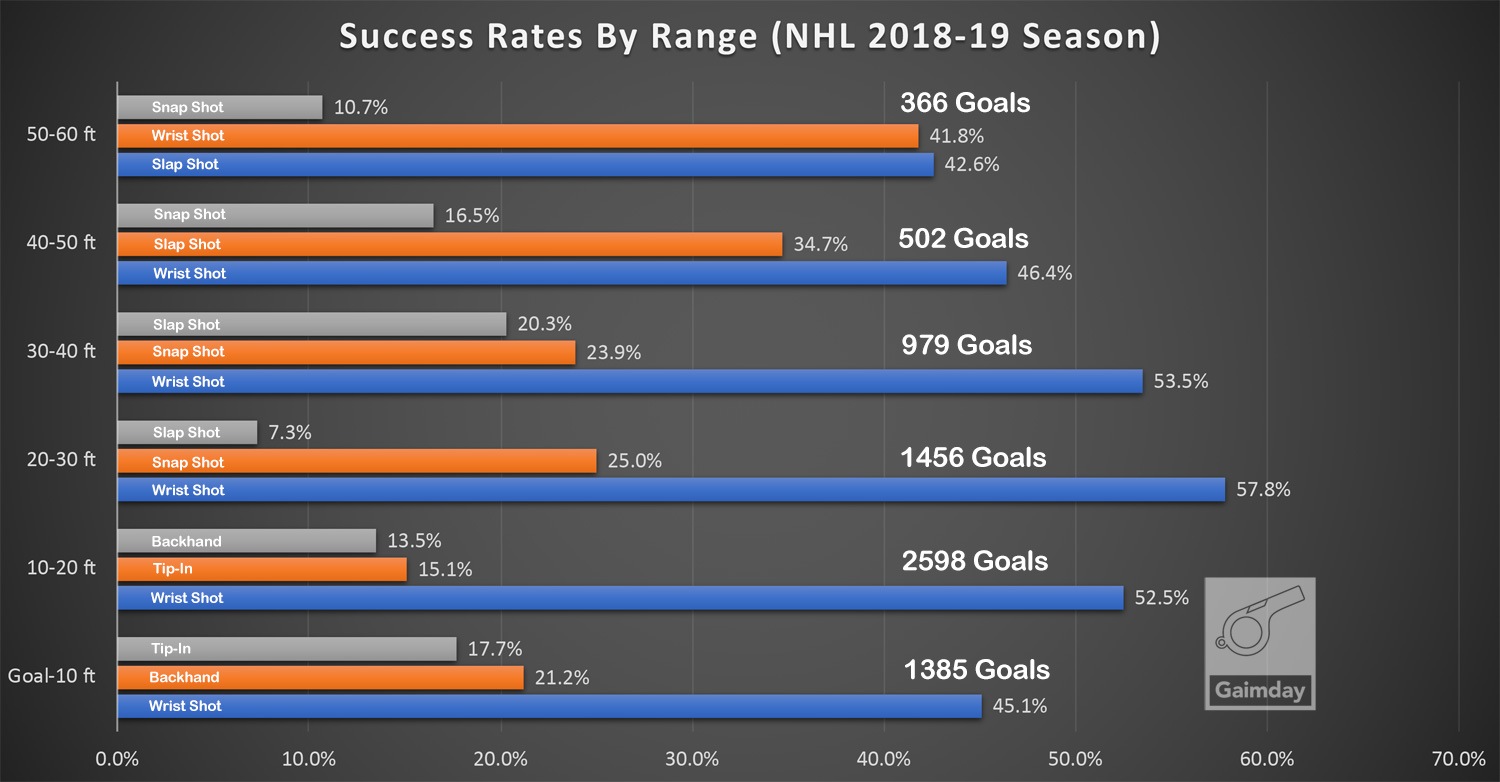 When are snap shots most effective?

When it comes to snap shots, players need to be in stride if they are the puck carrier. That is, you need to be skating towards the goalie to get the shot off with enough acceleration and speed.

Snap shots are most effective 20-40 feet from the net, but still play 2nd fiddle to wrist shots overall. You can see that in the graph just above (Success Rates by Range).

But considering that snap shots are more deceiving to goaltenders and much more explosive than wrist shots, I would think to see both these scoring methods closer to equal.

However, the graph earlier shows that players prefer taking wrist shots more than anything else.

In the chart below, you'll notice that snap shots have a slightly higher scoring success rate (10.1%) than wrist shots (8.9%) overall.

Maybe we'll see more teams and players adapting to this statistical advantage in seasons to come.

As a note, the NHL players with the most snap shot goals in 2018-19 were Leon Draisaitl and David Pastrnak with 15 goals each. No surprise, as these are two of the most elite scorers currently playing. 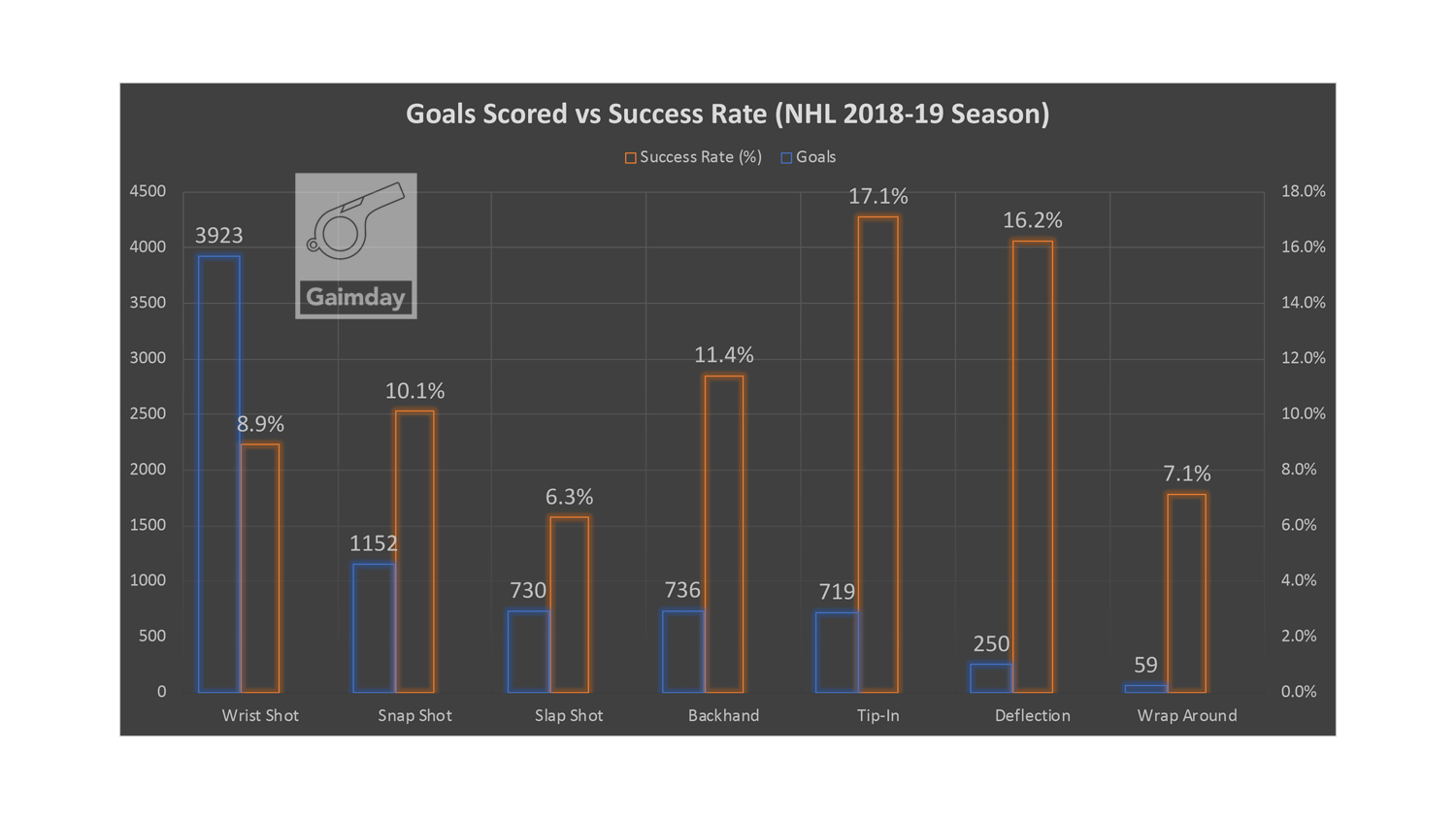 We all know that pucks tipped or deflected off a body causes major trouble to goalies. The slightest change in the puck's trajectory gives little to no time for them to adjust.

Furthermore, you'll always hear goaltenders complain about backhand shots since they cannot predict the angle of elevation on shot release.

Coaches and managers have observed these additional scoring opportunities for years. Notice how effective the player in the bumper position can be. They are not only placed in that position for creating screens, but to also tip or redirect pucks heading towards the net.

And in case there's a rebound, they can bury a goal by quick backhand or even a wrister (if they must).

Where are most NHL goals scored from?

See the image below to see the success rates for scoring at various ranges (source). 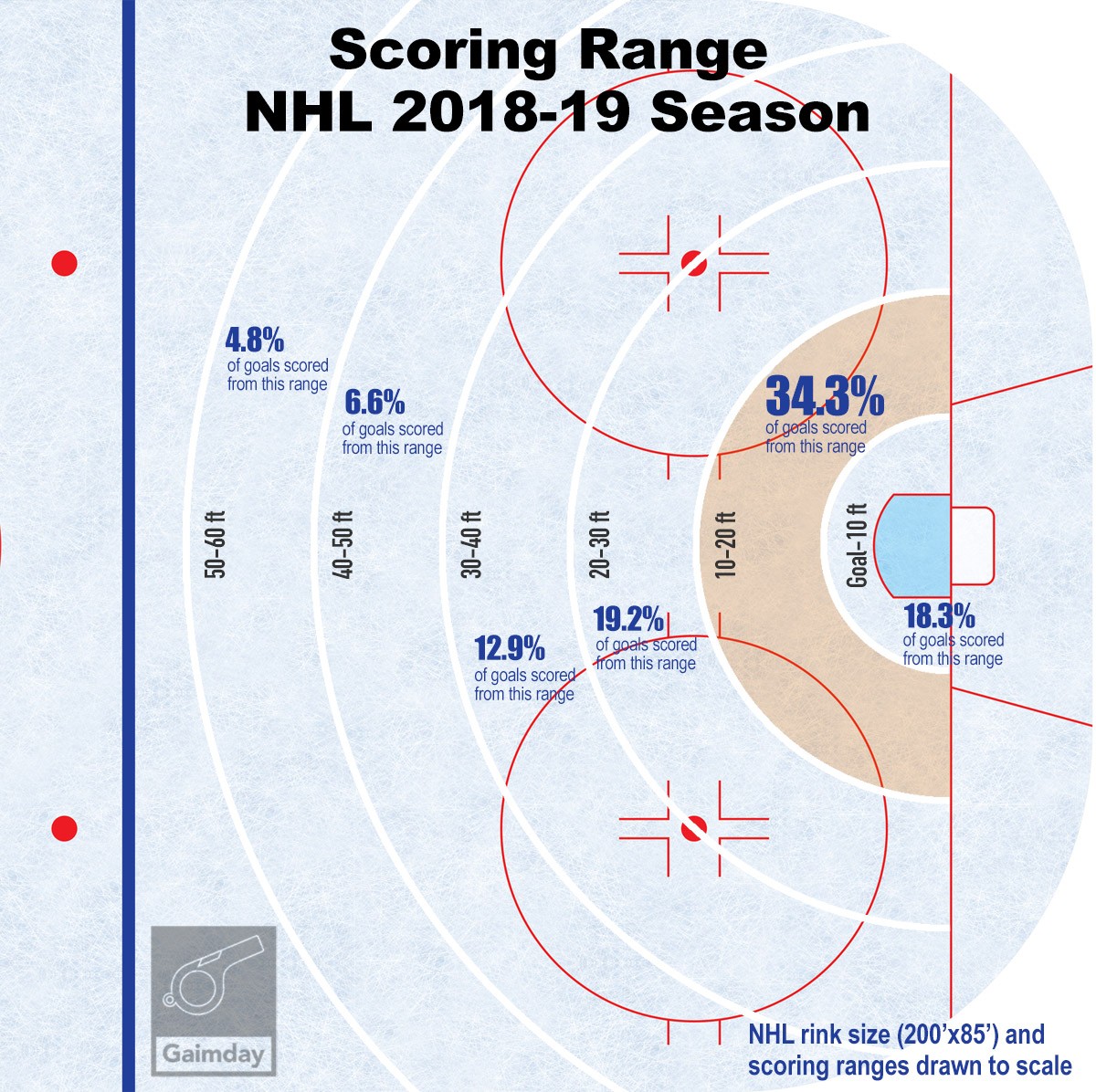 It's also important to note that players were more likely to score from the middle of the ice compared to near the boards. That's because goalies expose less gaps for the puck to seep through resulting in better net protection from shots at an angle.

If you want to have success scoring goals at any level of hockey, including the NHL, you'll want to shoot wrist shots from the slot areas, especially 10-20 feet away from the net.

Next on the list is the snap shot. Although the snap shot doesn't dominate the success rate at any range from the net, it remains always a close 2nd or 3rd best shot option.

The ideal distance to execute a snap shot is from 20-40 feet out. For slap shots, the best distance is 40-60 feet out.

While the tip-ins, backhands and deflections are more prominent when closer to the net (10 or less feet in).

You might also be interested in reading about the importance of shooting in the game of hockey. Visit my blog titled 15 Shots Used by NHL Pros | Why Shooting is so Important.

There, I also list more descriptive ways for NHL players to shoot the puck. Not just the general categories assigned to shots by the NHL stats team.

I would assume that the Lacrosse shot be described as a wrap around, while the mid-air swat as a tip-in. The problem is that the generic terms don't provide the whole story when trying to review shot creativity.

Lastly, I'm curious to know what you think...

Why don't NHL players take snap shots more often in the high circles and slot area? It seems money to me!