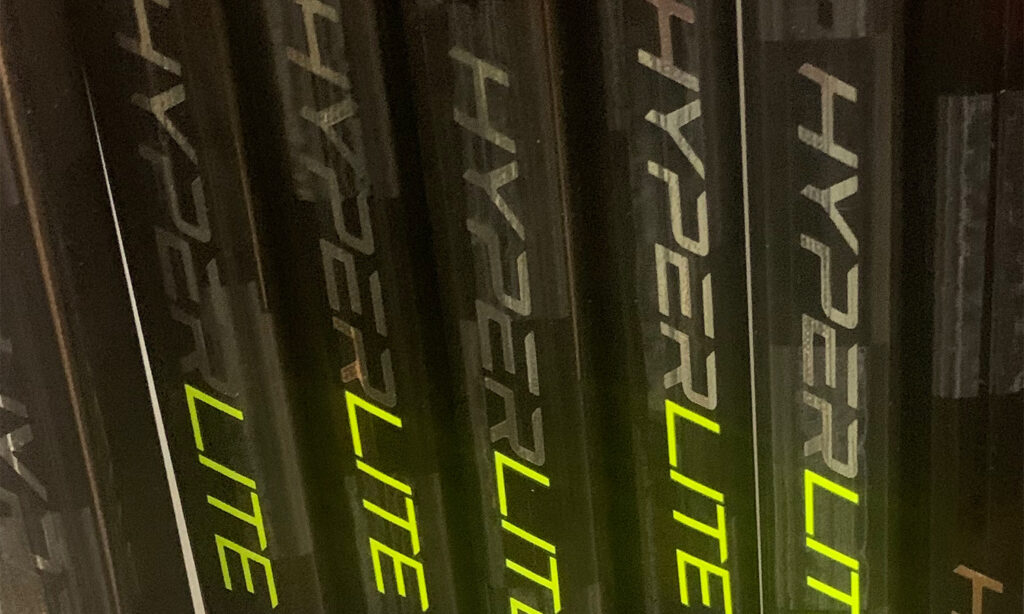 The production of hockey sticks has come a long way.

Since I was a kid, I’ve seen everything from wood sticks and aluminum two-pieces all the way to today’s one-piece composites.

The one-piece composite sticks were introduced in the early 2000s and continue to dominate the industry until today.

When competitors started catching up to the technology, the manufacturers found innovative ways to set themselves apart from the competition.

The main qualities of composites are its robustness and being lightweight. But they’ve also added an outer grip coating, various shaft flexes, kick point for shot release and lie for stick angle.

The one feature that has recently caught the attention of most amateur players and pros alike is the kick point.

In a game that is dominated mostly by wrist shots and snapshots (67% of all NHL goals scored), the kick point determines how quickly a shot can be released.

We’re looking at players such as Connor McDavid, Auston Matthews and Nathan MacKinnon who deceive goalies with a quick snipe.

With that said, let’s dive into which sticks are most popular amongst NHL players.

Below is a list of the top 3 hockey sticks used today in the NHL.

I also included a bonus CCM Jetspeed stick (FT5 Pro) because there are still players using the previous model (FT4). You can check the latest prices for these sticks along with their main characteristics. Why are these sticks popular?

As mentioned earlier, the most administered shot types are wrist shots (52%) and snap shots (15%).

The sticks highlighted in this post are either Low or Mid Kickpoints. They are also amongst the lightest sticks made by all brands mentioned.

Furthermore, they come in a variety of stick flexes, so players can choose their preferred stick flexibility (i.e 75, 85, 95 etc).

Essentially, most forwards will opt for the stick that delivers the most powerful shot and quickest release.

And with the amount of force players unleash off a shot, they’ll need the stick to be equally robust.

Just check how much arc can be produced prior to the release.

Not only must the stick withstand the immense stress along the arc, but the shaft must return to its original form after each shot.

Let’s give credit to all the brand manufacturers for contributing to the evolution of the stick.

If you’re on offense, you should look at sticks with lower flex, low or mid kickpoint and a toe or mid blade curve.

Let’s break this down.

The stick flex is easy to figure out.

Simply, take your current weight in pounds (lbs) and divide it by 2.

My choices are either 75 or 85 flex, but the ideal choice lower value option (75). That’s because it would create a better arc prior to unleashing a wrist shot or snapshot.

The arc helps generate greater power on the shot, more so than a stiffer stick options.

The kickpoint is the softest point along the shaft closest to the blade of the stick.

Similar to the stick flex, it generates power for a quick and harder shot release.

The lower the kickpoint, the quicker the blade experiences a sling shot effect.

As for the blade curve, you’ll be looking at either the toe or mid curve options.

That’s because the farther away the blade curve is from the shaft, the easier it is to lift the puck on the follow-through.

Furthermore, it allows for better stick handling and seamless passing.

Personally, I like using the CCM Ribcor Trigger series, but you can always choose amongst the most popular hockey sticks mentioned above.

You can’t go wrong with any of these.

As a defenseman, your stick options are much broader depending on your style of play and size.

If you’re a tall, bulky, stay-at-home defenseman, you’ll be looking at a stick with a higher stick flex rating, high kick point and a mid or heel curve.

The high stick flex and high kickpoint is ideal for shooting from the point – such as a slapshot or one-timer.

If you don’t want to compromise on shot power, the stiffer shaft is the best way to go.

Shorter (under 6 feet), more mobile defensemen may want to opt with a high stick flex, mid to low kickpoint and a mid or toe curve.

When I say high stick flex, I mean for you to opt for the upper option based on your weight.

To calculate which stick flex is best, take your weight in pounds (lbs) and divide by 2 for your score.

The advertised flex value is typically measured for a stick cut at 60 inches or five feet high.

Lastly, don’t feel automatically compelled to buy a stiffer stick just because you are a defenseman.

Most NHL defensemen nowadays are cutting down on slapshots and focusing on wrist and snapshots too.

All three of these sticks are listed as low or mid kickpoint models.

The stick models listed above are all high-end editions of each brand.

For a more comprehensive list that includes more budgetary and heavier sticks, make sure to check out the following blog post I wrote comparing all kickpoint models.

You can always drop a comment below letting me know which is your favorite stick.

Include your position and height so that others can get idea what’s could be suitable to them.