What Stick Does Auston Matthews Use? (CCM Model…) 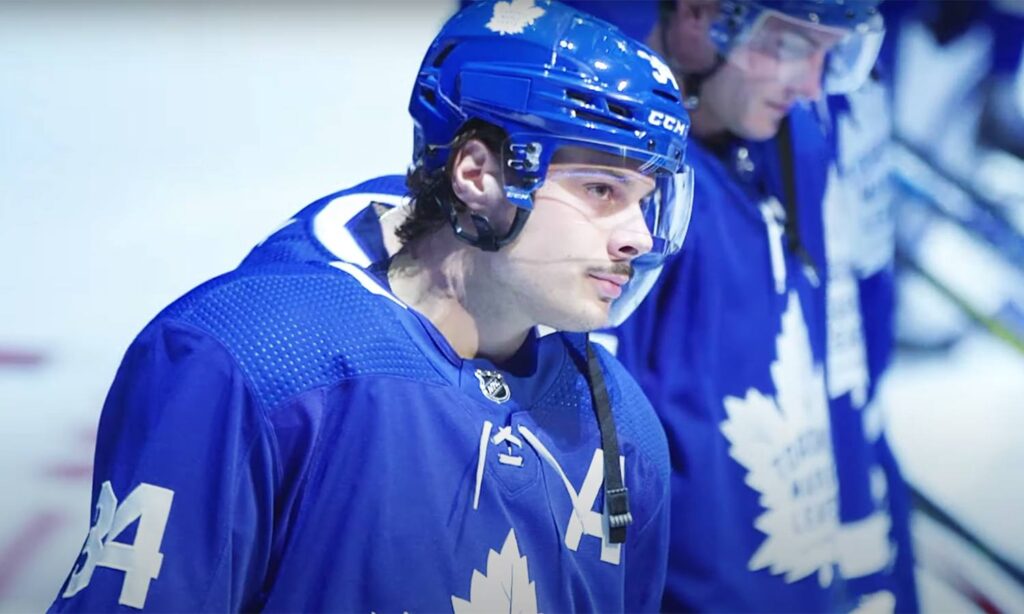 Auston Matthews has one of the deadliest in the NHL today.

His ability to release the puck so seamlessly and target tight corners is second to none.

But let’s not leave out the added contribution he gets from his hockey stick.

The design advancements made to composite sticks in the last 20 years have been nothing short of amazing.

Not only are sticks lighter than ever, but the latest features allows for an almost customizable stick for each individual player.

I am specifically talking here about features such as stick flex, kick point, blade curve and lie.

As for Auston Matthews, he does have a preference in stick model and its set of features.

What Stick does Auston Matthews Use?

Auston Matthews uses the CCM Jetspeed FT4 Pro model for the 2022-23 NHL season. The stick is made of a lightweight carbon fibre weave and has a hybrid kick point optimized for snapshots. While this model was released back in 2021, the latest version available is the CCM Jetspeed FT5 Pro. Matthews rotates between various CCM sticks which include the Ribcor and the Super Tacks Series.

The main distinction between the Jetspeed, Ribcor and Super Tacks is their kick point design.

I’ll get into the various stick characteristics below, but the kick point plays a role in each player’s shot selection.

The CCM Ribcor Trigger Pro is most beneficial for wrist shots and snapshots. The CCM Jetspeed is best for snapshots and slapshots.

Meanwhile, the CCM Super Tacks is typically used by defensemen and optimized for slapshots.

There are other things to consider including stick flex, blade curvature and lie.

And for those looking to mimic Auston Matthews at a more reasonable price, you’ll have to consider the stick weight as well. Basically, the heavier the stick, the lower in price.

Keep in mind that the heavier variations are made of different, but just as durable materials.

While Matthews has described his choice in stick based on feel, his main reasons are likely is based on quick release and shot power.

His preferred shot type is either wrist shots or snapshots. Matthews has pointed out that he rarely uses a slap shot for shot selection.

What Stick Flex does Auston Matthews Use?

He’s mentioned before that he uses an 80 or 82 stick flex (based on brand) to achieve the ideal arc on his shaft.

The ideal stick flex is related to each player's weight. In order to determine the best stick flex for you, take your weight in pounds (lbs) and divide by two.

The resulting score will land on the exact stick flex required or between two available options. The lower the stick flex value, the more flexible your stick is.

Keep in mind that cutting your stick will increase the stick flex value, regardless of what is described on the stick.

What Kick Point does Auston Matthews use?

Meanwhile, the kick point is the portion of the shaft that snaps the blade back into place.

The kick point is designed at the lower end of the shaft. When the shaft snaps back to its starting position, that is when the puck propels to the net.

I think a low kick point option would work against the full power of his (Matthews) shot.

Furthermore, the amount of force he generates in the stick would likely cause the stick to snap for a low kick point option.

The hybrid (mid) kick point is a balance between a quick release and to generate the greatest force on the follow through.

Lastly, Matthews also alters his body angle while he prepares for a shot. The shift in body position leads to a shift in the shot angle too.

A hybrid kick point would allow him to change the shot angle seamlessly, without a force change to the angle of the blade.

I included a video example here to demonstrate how his body shift leads to greater deception when shooting.

What curve does Auston Matthews Use?

Since there are several options for blade curves, you are probably interested in knowing which curve is used by Matthews.

He’s specifically mentioned the Sakic Curve (P92 - Bauer), which is a mid-toe curve. Since he’s moved onto the CCM line, the curve equivalent is the Crosby curve (or P29 - CCM).

For a comparable chart across all stick brands, make sure to check the link here.

The ideal curve for shooters is either the toe curve, the mid curve or anything in between.

I do not like the heel curve whatsoever. And it is very rare to find a forward that uses such a curve.

It took away from my shot, stickhandling and passing. But it simply could be a matter of preference.

But take my word for it, most NHL sharp shooters stick between the toe and mid curves.

As mentioned earlier, Auston Matthews has switched between various CCM models for the occasional alteration.

Perhaps he’s gone through a cold streak or just has had misfortune with the model in question.

For those interested, he’s recently used the CCM Ribcor Trigger 7 Pro and the CCM Super Tacks AS4 Pro.

Personally, I prefer the CCM Ribcor Trigger Series because it gives the kick I need in my wrist shots.

Not every player possesses the same strength as Auston Matthews and may rely on some assistance from the stick.

And considering that most goals are scored off the wrist shot (51.8%), I prefer getting help from my stick.

Below are some of the highlights of the alternate sticks used by Auston Matthews.

As a note, the Super Tacks is most ideal for slap shots and frequently the go-to for defensemen.

When I was growing up, the cool thing was to practice my slapshot.

Little did I know that it played a minimal role in scoring, especially for forwards.

And that was back then.

Today’s game is all about speed. Not just in skating, but in shot release.

The fastest ways to shoot the puck is by wrist shots, snapshots and one-timers.

Again, you can refer to my blog post here about How Most NHL Goals are Scored.

The NHL stats show that wrist shots and snapshots make up the bulk of the goals.

And the top goal scorers, such as Auston Matthews, have the quickest, most precise shots in the game.

It is up to you to mimic their tactics.

And what better way than to do so by working with the same weapon (stick) of choice.