What does l10 mean in Basketball? (in NBA standings) 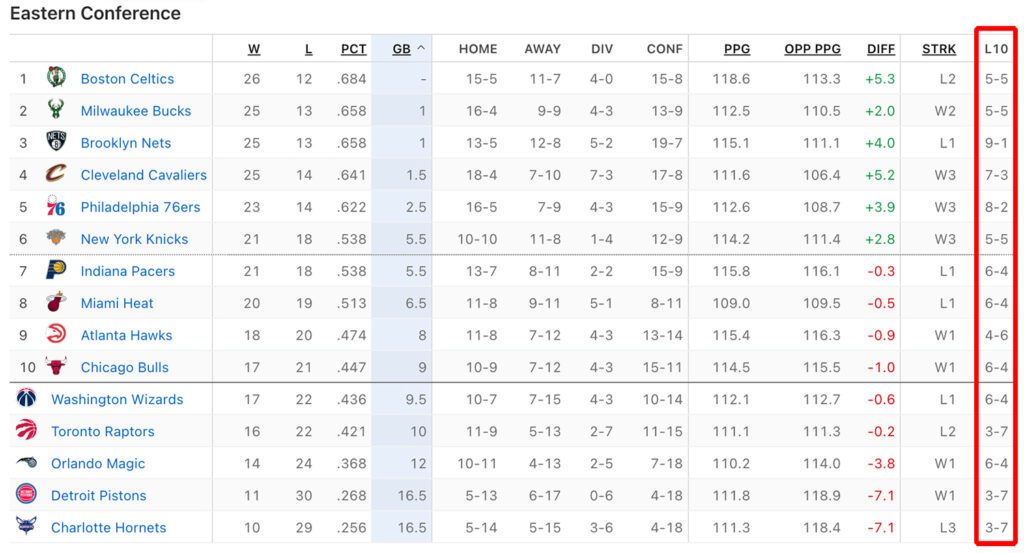 Whenever browsing the website of professional team sports, you’ll come across the standings page.

The team standings is used to display each team’s record and where they rank relative to their opponents.

The same applies to the basketball standings, more specifically the NBA.

If you were to go to the official NBA.com standings page, you’ll notice it is composed of 12 columns worth of data.

While most of the columns play a role in determining each team’s place in the standings (such as Win% and GB), there are two columns that can be best described as “informative” data.

Those two columns are the STREAK and l10 columns.

The STREAK column displays the team’s recent string of consecutive wins or losses. The value is reset to “1” each time the streak is broken.

What does l10 mean in Basketball?

L10 or “last 10” is short for the team record in the last 10 games played in basketball. The value displayed is the team Win-Loss record over their ten most recent games. The column serves to inform sports fans or gamblers of a team’s success or drought.

As mentioned above, the l10 column plays an informative role in the standings. It has no impact on team standings or playoff qualifications.

How to read the l10 column?

The l10 column in basketball is denoted as wins, followed by losses (i.e 6-4, 6 wins and 4 losses). In NBA games, one team must come out victorious while the opponent suffers a loss.

In other sports, you’ll see up to three values in the l10 column. For example, NFL games (actually l5 column) can end in a tie. Therefore, the additional number represents tie games.

Meanwhile, NHL games also use the three-value l10 system, but the last number represents a team loss in overtime.

That is, the NHL differentiates between regulation time and overtime losses.

NHL games can no longer end in a tie, which has been in effect since the 2005-06 season. NHL teams will play a 5-minute overtime, followed by a shootout to settle the tiebreaker.

As for the NBA games, teams will play one or more overtimes to determine a winner. Each overtime is 5-minutes long and the team with more points at the end of the period will be crowned the winner.

When it comes to the l10 column, the best-case scenario is a 10-0 record. Meanwhile, the worst possible case is an 0-10 record.

This does not mean that the team’s record can be limited to 10 consecutive wins or losses. Their record can go beyond that.

It’s simply capped to the 10 most recent games played.

Lastly, the l10 record is not carried into the next season or playoffs. The column results are restricted to the regular season only.

If a team has played less than ten games at the start of the season, the column count will be limited to only total games played so far.

Once the team hits the ten-game threshold, the l10 game count will be capped at ten in total.

Those values specifically indicate the record over the last 10 games of the regular season only.

Keep in mind that the l10 column values continuously vary over the course of the season for each team.

I couldn’t find an exact date the l10 column was originally introduced to basketball standings. I suspect they date further back than reported in 2001-02.

These values have been used for many decades by the other major sports leagues and it’s likely the NBA kept track of it as well.

At worst, the NBA can easily add those values retroactively to the standings if they chose to do so.