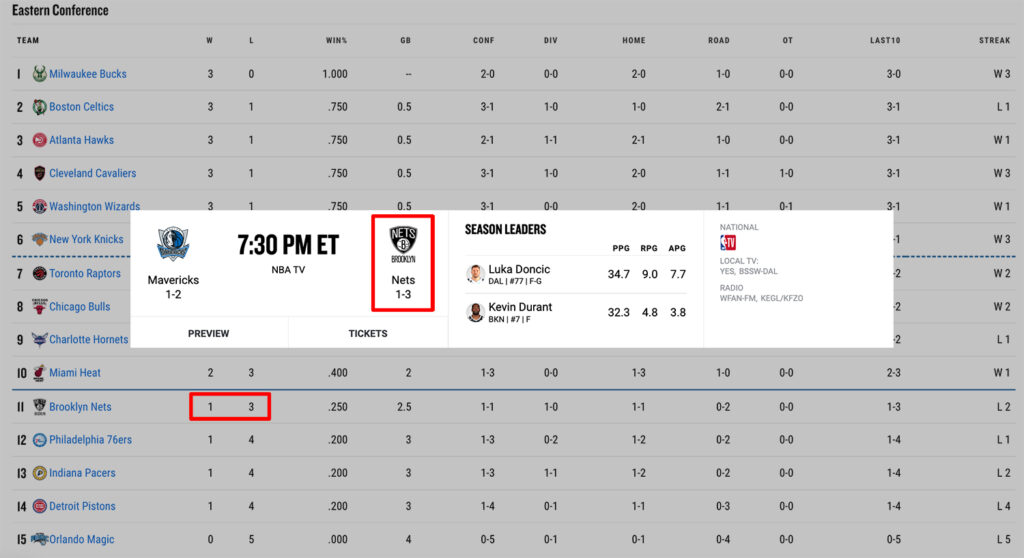 When it comes to looking up stats for any sports, fans and viewers alike are bombarded with different sets of numbers.

For basketball, you can be looking up a player’s average points per game (PPG), their field goal average or even their three-point percentage.

There is a plethora of stats which you can search an eternity for.

These stats can paint a broader picture of how good (or bad) certain players were at the NBA level.

When it comes to team standings, you’ll feel just as overwhelmed. Just by clicking at the Standings Page, you may notice 11+ columns of data to sort through.

The column count can vary depending on your source for sports (NBA.com, ESPN, etc).

But let’s start off by simplifying things. Let’s look at the record displayed next to a team logo or upcoming match up.

How to read NBA Standings

The numbers next to an NBA team logo refers to their win-loss record. The first value is the total number of wins, followed by a hyphen and the loss count (i.e. 53-29, 53 wins and 29 losses). Wins or losses in overtime are included in the team record – while no game can end in a tie.

To check out the latest NBA Standings, make sure to click here.

Team records are ideal to gauge if your team is on the right or wrong track.

The greater the gap between wins and losses, the more likely your team is having a successful season.

Obviously, you need to see how other teams are performing comparatively in the same division or even conference to be certain they are playoff-bound.

But this is just part of the team record story.

When your team is in a tight battle for a playoff spot, you’ll want to take a deeper dive.

How do NBA Standings Work? Teams are ranked primarily by their win percentage (aka Win% or PCT). It is calculated by the number of wins divided by the total number of games played.

As you can, the Win Percentage is rounded up to the third decimal place.

If you’d like to learn more about Win Percentage, make sure to read my blog here about What does PCT Mean in Basketball?

Keep in mind that several teams can finish with the same Win Percentage, so other column stats are used to determine their rankings.

This is part of the NBA tie-breaking rules. This is crucial for teams looking to qualify in the playoffs or even eyeing a certain playoff match-up.

During the season, it can be tricky to determine which team is ahead in the standings just by looking at their team records.

That’s because teams may not have played the same number of games to date.

Another column that can assist in determining team rankings is the Games Back (or Games Behind) column.

It is sometimes displayed as the acronym “GB”.

Basically, when a team wins a game, they net +0.5 to their Games Behind record.

Meanwhile, the opposite happens when they lose a game. The net outcome for that game is -0.5 Games Back.

The Games Behind column compares all other teams to the top team in the division (or conference).

So you’ll always see a hyphen ( - ) in the GB column next to the divisional or conference leader.

That’s because all the other teams are trying to catch up to the top team.

Should the divisional or conference leader win another game, they’d increase their GB lead by an additional 0.5.

And sometimes looks can be deceiving when it comes to team records.

For example, if the Boston Celtics had a 40-30 record while the New York Knicks were 39-28, the knee jerk reaction is that the Celtics are ahead in the rankings.

The net result is that the Celtics are 0.5 games back from the Knicks.

For more details on Games Back, make sure to check out my blog post here on What Does GB Mean in Basketball?

By the way, this was a hypothetical scenario. Many Knicks fans will be happy to see their team return to a this level of winning.

And for my audience who are into hard numbers, the winning percentage of each team reflects the overall position of these teams too.

So, the combination of the team record, games back and the Win% gives you a clear explanation of team standings.

Again, while the record can give you an idea if a team is on the right (or wrong) path to a playoff berth, it does not paint the full picture.

And if it comes down to the wire and you’d like to know if your team has a playoff chance, make sure to check out the official NBA tie-break procedure.

You’ll be surprised to learn it can come down to the net difference between points for and against all opponents.

The NBA has got it down to a science and leaves no rock unturned to set the record straight – for team standings.