What Does ROW Mean in Hockey? 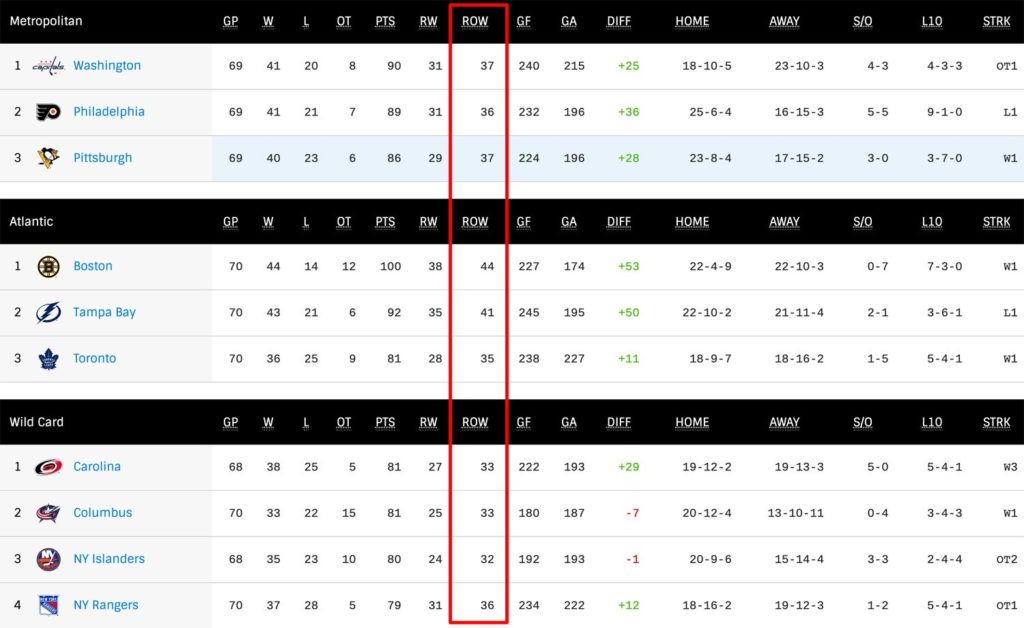 The NHL standings serve to determine the position of every team in the league.

The purpose is for teams to accumulate the most points throughout the year so they can qualify for the playoffs.

If you look beyond the team points, you might be asking yourself about the remaining columns on the page. Some are obvious, such as the wins (W), losses (L) and overtime losses (OTL) columns - that’s the basis of how teams earned their point totals.

Some columns are simply informative and have no effect on the rankings at all. These include the home (HOME) and away (AWAY) records, last ten games (L10) and win streak (STRK).

But there are other columns that play an important role in determining the position of teams when tied in points. This is especially useful for teams in the same division or conference.

These columns all lie just to the right of the points column (PTS). One of them is ROW.

If you’re new to hockey or simply needed a memory refresh, you’ve likely come to this post asking the following question.

What does ROW mean in hockey?

The ROW acronym in hockey stands for Regulation plus Overtime Wins. It was introduced in the 2010-11 NHL season to distinguish between regulation/overtime wins and shootout wins. When two or more teams are equal in points and regulation wins, the team with a greater ROW will be ranked higher in the standings.

When first adopted, the ROW value was the primary figure to settle any tie-breaker rule for teams equal in points at regular season end.

As of the 2019-20 season, the NHL added the RW column, taking priority over ROW in resolving tie-breakers.

For more information about the RW (or Regulation Wins) column, please read my blog post here. I provide a detailed example of exactly how it applies to teams tied in the standings.

Why was the ROW column added to the NHL standings?

The ROW column is a by-product of a rule change introduced back in the 2005-06. That was the first season where tie games were eliminated and replaced with shootouts (link).

Many teams and general managers were reluctant to have games won from a shootout, because it came off as gimmicky and disingenuous. That is, teams could now earn victories through an individual skill competition rather than a team approach.

After several seasons with these rules in place, the league finally decided to differentiate between team wins and shootout wins.

Without making changes to the point distribution, priority would be given to teams who earned their victories in regulation or overtime.

As a reminder, teams earn 2 points in the NHL standings no matter how the win is achieved.

The league has thought about adopting a 3-point system, which is already in place for other professional hockey leagues (i.e. Swedish Hockey League & National League). Their teams earn 3 points for regulation wins and 2 points for overtime and shootout wins.

When further examined, the league noticed that more teams would be out of the playoff race earlier in the season. For the sake of ticket sales and the overall league growth, the 3-point system continues to be ruled out as an option.

ROW in the Tie-Breaking Procedure

Currently, the ROW column is ranked 3rd in terms of importance in settling teams equal in points.

NHL Tie-Break Rule #3 states: “The greater number of games won, excluding games won by Shootout. This figure is reflected in the ROW column.”

As mentioned earlier, the RW rule precedes the ROW resolution to the tie-breaker. And, if two or more teams are tied in points, RW and ROW, the next step is to look at total wins however achieved.

Example of the ROW stat in effect

Which other hockey leagues monitor ROW?

I’ve quickly put a table of most other professional hockey leagues worldwide and some well-known junior leagues indicating whether they use ROW or not.

Some leagues do not require to monitor ROW since they follow a 3-pt system for regulation wins. Both overtime and shootout wins are less valued and only earn teams 2 points.

Other leagues follow a 2-point system, but don't distinguish between wins.

The ROW (Regulation plus Overtime Wins) column was added several years after the introduction of the shootout (2005-06).

The change was made to address the issue of equating gimmicky shootout wins to team-first type wins (regulation and overtime).

By distinguishing between both victory types, the league could use the stat to resolve the position of teams tied in the standings.

For teams looking to stamp their ticket into the playoffs or earn home-ice advantage, a greater ROW count would rank them higher in the standings.

The point was not to tamper with the point distribution system for wins, losses and overtime losses.

The league prefers to keep the 2-point system rather than adopt a 3-point system that would see weaker teams eliminated from the playoffs much sooner in the season.

As mentioned earlier, the league went one step further by introducing the RW (Regulation Wins) column. This was adopted in the 2019-20 season and placed ahead of the ROW stat to settle tie-breakers.

For more info on RW, check out my blog post here.

Lastly, on a personal note, I'm interested to see if the NHL chooses to integrate new measures in the years to come. Whether that be for the point-system or the steps taken to resolve tie-breakers.