What does PCT mean in Basketball? 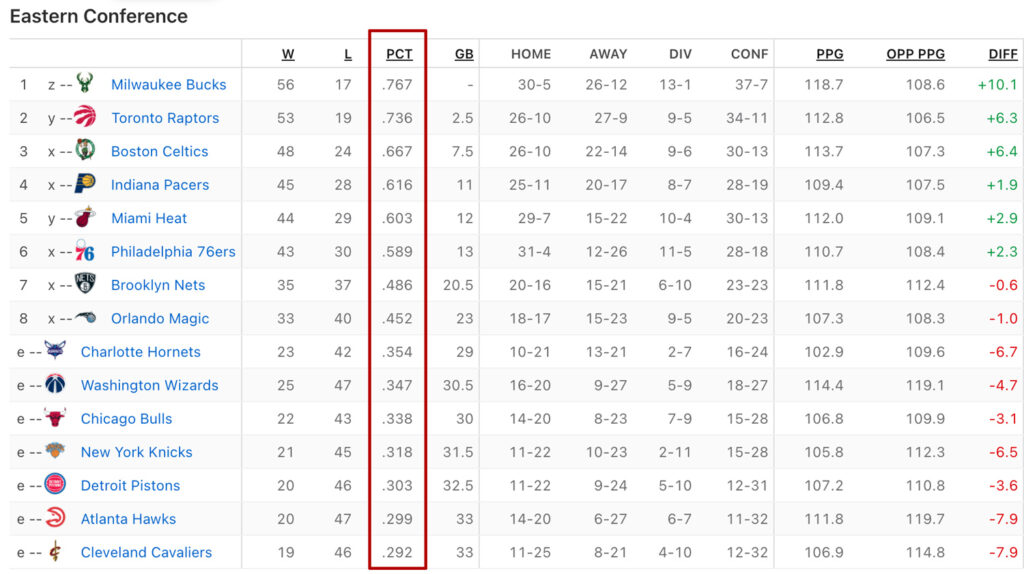 In the NBA standings, team are ranked based on their PCT and GB columns. Both abbreviations are connected to a team’s win-loss record.

For example, GB - short for games back - is a stat that compares the record of one team to their divisional leader.

I cover this topic in detail in another one of my blog posts that you can read here. There, I explain how to calculate games back (GB) and what the half values mean (i.e. 3.5 GB).

As for PCT, this is the primary value that determines the order of teams in the standings.

What does PCT mean in Basketball?

PCT is an abbreviation for Winning Percentage in the NBA standings. It is the portion of wins earned from the total games played per team. PCT is reported as a fractional value rounded up to three decimal places.

Teams with a greater PCT will rank higher in the standings, whether sorted by division, conference or the entire league.

Should two or more teams finish with the same win-loss record, the NBA applies a tie-breaking procedure (source).

As a note, PCT is sometimes abbreviated as WIN%, representing the same long-form terminology.

You will notice this distinction while looking up two major popular sites: NBA and ESPN, displayed respectively as WIN% and PCT.

How to calculate Winning Percentage (PCT)?

The calculation for PCT or winning percentage is quite simple.

I illustrate the formula below:

Relationship between PCT and GB

While we can easily determine which team would rank ahead of another based on their winning percentage, we don’t know by how many games the weaker team trails.

As a manner of convenience, the NBA includes the GB column, also known as Games Back (or Games Behind).

The values for each column are comparative only when two teams have played the same number of games.

Let’s look at the following example:

As can be observed, the Indiana Pacers are two games back of the Chicago Bulls. It’s a simple way of saying that the Pacers would match the Bulls record if the former win their next two games, while the latter loses both.

But the relationship falls apart if the games played were not equal.

What if, due to scheduling, the Pacers played and won their next 4 games while the Bulls had a bye week?

These would be extreme circumstances, because you never see teams take a full week off mid-season.

If anything, the league might grant some time off for all teams across the board, such as during All-Star Weekend.

But let’s go back for the hypothetical situation:

Although the Pacers are no longer any games back, they still trail the Bulls in Winning Percentage.

The only advantage for the Pacers in this situation is that they’ve secured two additional victories than the Bulls. The problem though is that the Bulls have 4 games in-hand now to play.

Based on their current record, they’d be on pace to win 3 of their next 4 games. But that’s not an automatic given.

Similarly, two teams can be undefeated, but one may still trail the other in the standings.

Here, both Bulls and Pacers have 1.000 WIN% or PCT values, but the Pacers have played two less games. Every game played increases or decreases a team’s GB value by 0.5 depending if they won or lost.

In the end, the winning percentage does not correlate, in any way, to the GB when the games played are staggered between teams.

But the two values together still complement each other for comparing teams in divisional or conference standings.

A team should maintain a PCT above 0.500 in order to qualify for the playoffs.

It’s still possible to clinch a playoff spot with a value below 0.500, but it’s likely that team will need a dream run to win it all.

In all likelihood, if a team were to clinch with a losing record, it’s probably because the teams ranked ahead won a greater proportion of games.

When I looked at the 2019-20 Season, three teams qualified with a sub 0.500 PCT to the playoffs. Needless to say, that none of those teams won the NBA Championship.