What does GB mean in Basketball? (And how to calculate) 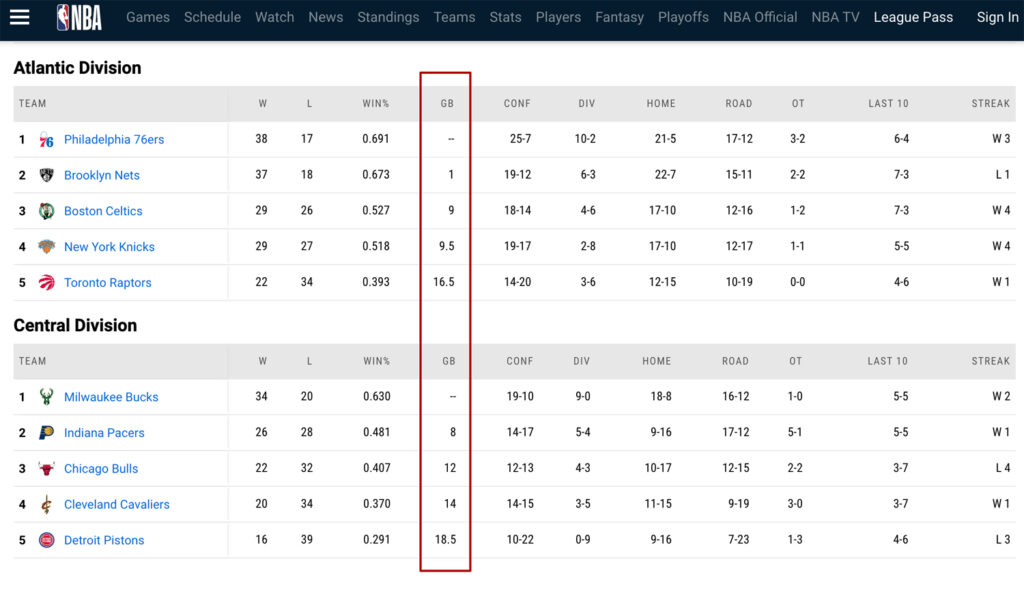 All major sports leagues use a ranking system to sort their teams from best to worst.

While hockey uses a point system, most other leagues - including the NBA - use the GB and PCT system.

That is, teams are ranked based on their winning percentage, hence the PCT acronym.

However, it can be confusing to figure out how many wins are needed for teams to catch up to first place, based on percentage only.

Therefore, the NBA includes the GB column to make it more palatable.

What Does GB Mean in Basketball?

GB is an acronym for games back or games behind in the NBA standings. The value indicates how many games each team trails their first-place, divisional rival. Games Back values shift in increments of 0.5 per game played, per team.

Since every team plays an equal amount of games by season end, it’s impossible for a team to trail another in games back with more wins earned.

However, this can happen mid-season while teams have played an unequal amount of games due to league scheduling.

Does 0 GB mean teams are equal in PCT (Winning Percentage)?

Only teams with the same number of wins and games played will both be equal in PCT and be 0 games back.

However, it is possible to be 0 games back and have a different win percentage (PCT).

In the example above, the Pacers reduced their Games Back against the Bulls down to 0 by winning four games straight.

However, the Bulls remain ahead in the standings with a higher winning percentage (PCT). Although the Bulls have less win, they’ve also played less games (4 in-hand).

The only advantage for the Pacers in the standings is that they have 2 more banked wins compared to the Bulls.

The GB-PCT dilemma will only resolve itself once the season comes to an end and all teams have played an equal number of games.

Can a team be equal to first-place in PCT, but still trail in Games Behind?

This is another interesting situation and can definitely happen while the teams have played an unequal amount of games.

Let’s take a look at a hypothetical situation in the NBA standings:

While both teams have remained undefeated since the start of the season, the Bulls are ahead by 1.0GB in the standings.

That’s because the Bulls have secured the extra victories while having played two more games than the Pacers.

Until the Pacers play those games in-hand, we’re not certain as to what their record yet will be.

Now that we’ve covered these two GB-PCT scenarios, let’s demonstrate how the NBA and other basketball leagues calculate Games Back.

How to calculate Games Back?

The simplest way to calculate Games Back between two teams is to separate their wins and losses.

This can be done using the first-place team as the control group, or any other team for that matter.

Perhaps you want to verify how many games your team needs to catch up a certain due to playoff implications.

In any case, we’ll use the example below for context:

Games Behind for Wins: Win Differential/2

Games Behind for Losses: Loss Differential/2

As I noted before, Games Back values shift in increments of 0.5 per game played, per team.

When you see the GB value with a half number, this is an indication that teams have played an unequal number of games. More specifically, the total number of games played between both teams amounts to an uneven number (i.e: 1, 3, 5 etc.).

In a previous example, we demonstrated the half value:

You can quickly add up that the Celtics played 55 games and the Knicks played 54 games. The total between the two is 109 and therefore can expect the Games Back number with a half value: 3.5 GB.

The Games Back column is very useful when approaching season end to see if teams can mathematically catch up to a rival in the standings.

This is usually observed due to playoff implications or for home court advantage.

It is possible for two teams to finish equal in the standings with the exact same winning percentage and 0 games back.

When this occurs, the NBA uses a tie-breaking system described in their Playoff Tie-Break Procedures found at the bottom of the standings page. (source)