Will Connor McDavid Catch Gretzky? (No, Here’s Why) 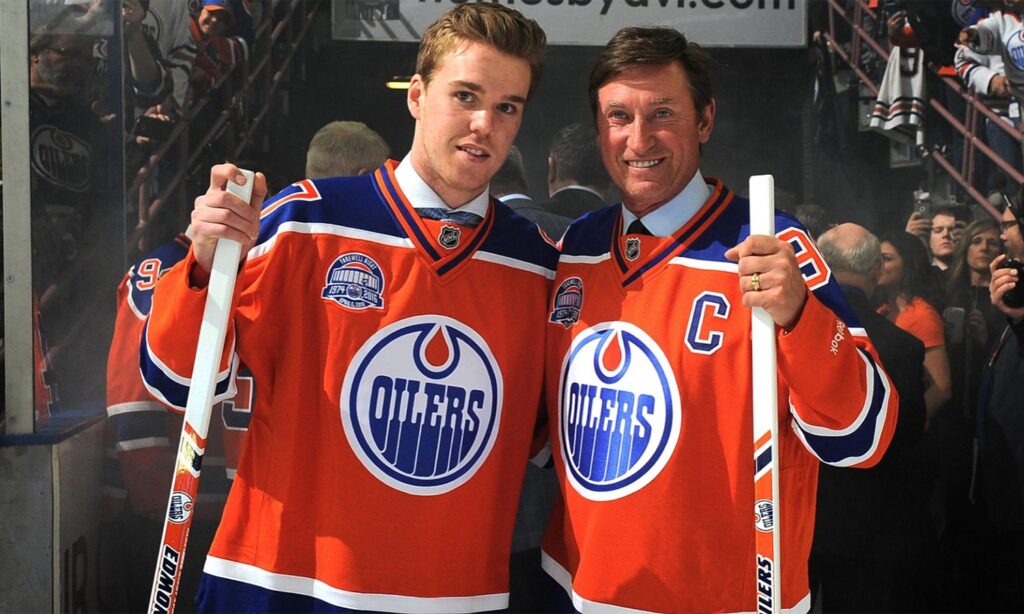 Wayne Gretzky, the Great One, is known to many as the best NHL player of all time.

He’s a four-time Stanley Cup winner who scored 894 goals and accumulated 2,857 points with a host of other accolades to his name.

His average points per game was a staggering 1.92 PPG.

That’s a difference of 936 points between the two of them.

Only 110 NHL players have ever scored more than 936 points in their career.

Many, if not most of them, are hall of famers.

And we’re talking here just over one hundred players amongst thousands who were graced with the opportunity to play in the NHL.

That’s how much better Gretzky was than the rest.

Connor McDavid, the next Great One?

But in 2015, the world would be blessed with the next generational player to take NHL by storm.

That player is Connor McDavid from Richmond Hill, Ontario, Canada.

When scouts are talking about how a player will dominate the league even before playing a single NHL game, you know the hype better be real.

McDavid got the same attention, if not more than when Sidney Crosby joined the league in 2005.

Mario Lemieux is highly regarded as the second-best player of all time.

Likely because he was able to keep pace with Gretzky (1.88 PPG) during their overlapping careers.

However, his tenure was was plagued with back injuries and cancer (Non-Hodgkin’s Lymphoma).

And we’ll never get to know how much he’d have closed the gap on Wayne Gretzky’s points record.

Lemieux’s 199 points in the 1988-89 season is the closest any player ever got to breaching the 200-point mark, aside from Gretzky himself.

He’d have easily ranked number two in all-time scoring based on estimations and extrapolations.

Coming back to McDavid, the task to beat Gretzky is quite daunting but is it even possible?

I mean, he does already have five 100-point seasons under his belt! So…

No, Connor McDavid will not catch Wayne Gretzky in overall career points. There is no possible way for a modern-day NHL player to manage a 200-point season, let alone four of those with several other 150+ point seasons. Effectively, a player would need to average almost 145 points per season, for twenty consecutive seasons.

These totals are essential for any superstar, throughout their career, to even come close to Wayne Gretzky’s scoring record.

But for those not convinced, let’s look at the record number of 100-point seasons by the top players. Gretzky achieved this feat 15 times, Lemieux 10 times, followed by Marcel Dionne with 8 (source).

As players age, their yearly point totals tend to decline. This has both to do with hockey taking a toll on the body, and because veterans lose out on ice time to younger players.

At this point of the argument, many fans will simply defend McDavid’s greatness by saying he would have dominated the league in the 80’s and 90’s.

Just take his existing abilities and drop him into the league as it was when Gretzky played. It would be child’s play.

McDavid would score at will and leave opposing teams in the dust. The goaltending save percentage would be far worse than it already was during the era.

The reality is that today’s NHL is more structured and methodical than it was back then.

We never take into consideration how a highly intellectual, youthful Wayne Gretzky could adapt to today’s NHL and dominate the league just as he did then.

If you say that we could never know, take into consideration how Jaromir Jagr played part in both the old and newer hockey era.

Jagr was a top scorer when Gretzky was late in his prime, and also when Crosby entered the NHL.

It’s not as though Crosby was running circles around Jagr.

Jagr actually finished second in scoring (123 points) during Crosby’s rookie year (102 points) in 2005-06. At the time, Jagr was 34 years old and clearly wasn't his youthful self.

I personally think that Jagr is the bridge that links the old NHL with the new.

And if the NHL was a cinch to play in during Gretzky’s days, why weren’t there any other 200-point players?

As with McDavid, Gretzky was in a league of his own.

But it is more difficult to score 2,800 points due to modern era player development and team strategies.

While the game has become even faster since the 80’s, you now have:

So, while the speed of the game has drastically increased, the teams play a much tighter style which makes scoring more difficult.

Will Connor McDavid end his career second overall in scoring?

Based on his journey so far, McDavid can close in on the second spot on the all-time scoring list. By my estimate, McDavid will finish with 2000-2200 points should he stay healthy and remain committed to play a lengthy career.

Simply put, in order for McDavid to reach 2,000 points, he’d have to score twenty 100-point seasons on average.

His current pace is 1.43 points per game (117 points per full season) and he’d need to stay healthy until the age of 38.

He’d probably be less effective by then, but the bulk of those points would come by the age of 36.

That’s when point productivity tends to decline below 1.0 PPG for even the best and longest-serving superstars. Meanwhile, McDavid is only 25 years old, so points should still come easy to him for the time being.

It will be interesting to see his game adapt in the later stages of his career. Will he remain his speedy self, or will the next emerging star eclipse his abilities at some point?

For those waiting to see a logical explanation why Connor McDavid should catch Gretzky in career points, sorry to disappoint.

When Jagr was set to surpass Messier for second place all-time, he said this:

“For me, it's like No. 1. I don't really count Wayne Gretzky. He was from another planet. I don't think he was from this planet. Whatever he did, it's unbreakable." (source)

Surely McDavid has come to the same conclusion. Himself, he has yet to exceed the 130-point mark.

But while he won’t hit 200-point, let alone 150-point seasons, his ability suggests that he will repeatedly put up 100-point seasons several more times.

Those point accumulations will help him shatter the 2,000-point level threshold.

When that day comes, you can proudly reference this blog post from 20 years back!