What does GB mean in Baseball? 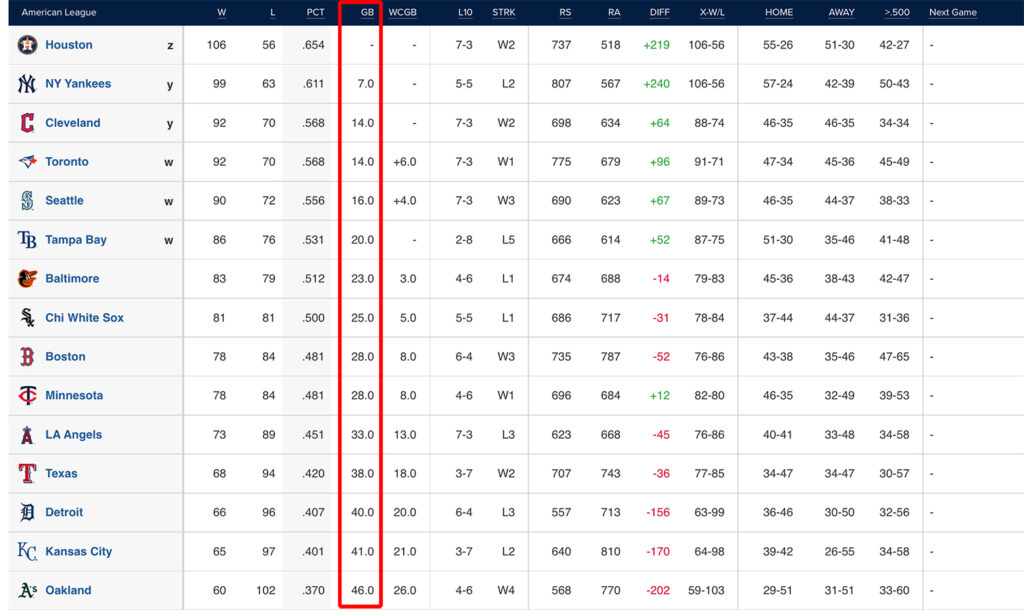 When exploring the team standings page in Major League Baseball (MLB), you’ll come across 15 columns worth of data for each team.

As you go further to the right, you might be scratching your head. This is quite common for the newfound fans to the sport.

It becomes even more nerve racking when you’re rooting for your team to qualify for postseason playoffs.

There are three main columns that help indicate exactly how far back (or ahead) your team is compared to their rivals.

Those columns are PCT, GB and WCGB.

PCT is short for Winning Percentage, which is the fraction of wins over the total number of games played.

Ultimately, the PCT value is used at the season end to finalize the team standings.

Should two teams finish with the same Winning Percentage (PCT), there are tie-breaker rules in place to determine who finishes ahead.

But, while the season is still in progress, the GB (and WCGB) column is a better indicator for explaining the gap between two teams.

What does GB mean in Baseball?

GB is short for games behind in baseball standings. It defines how far back divisional, or league rivals are to the first-place team, measured in unit of games. The lowest incremental value is 0.5, which indicates that competing teams have played an uneven number of games on the season.

When a team wins a game, they improve in the standings by 0.5 games. The opposite is true if that same team lost the game (-0.5 games).

This is why games against divisional rivals are crucial for the standings. The GB value would change in increments of 1.0 game between the two teams.

That’s because the only possible outcome for a baseball game is that one team must always emerge victorious. And thus, the opposing team is declared the loser.

There are times when the GB and PCT columns are at odds with each, especially when two teams have not played an equal number of games.

Note that these exceptions correct themselves at the conclusion of the season, when all teams complete the full 162-game schedule.

Scenario 1: Does 0 GB mean teams are equal in PCT?

The answer to this question is NO. Teams can have a 0 GB margin but vary in Winning Percentage.

In this situation, the Red Sox played an additional 4 games and won them all. Recall that each victory closes the gap by 0.5 GB, and the Red Sox won four straight.

Meanwhile, the Yankees haven’t played a game during that time frame.

Although the Games Behind gap was closed, the winning percentage is still in the Yankees favor.

That’s due to the unequal number of games played by each team. The winning percentage takes precedent over GB in the standings.

Scenario 2: Can a team be equal in PCT, but trail in GB?

The answer to this question is YES. A team can still trail their divisional rival in Games Behind even with an equal Win Percentage.

Again, this phenomenon is only possible while two teams play an uneven number of games.

While both teams have a perfect winning record, the Red Sox have banked two more wins over the Yankees.

As a result, the Red Sox emerge on top in the standings, while the Yankees trail by 1.0 GB.

We don’t know what the next two games will look like for the Yankees while they still have two games in-hand to play. They could be wins, losses or a mixture of both.

What is certain is that the Red Sox won all their games, thus far, and are rightly ranked as the divisional leader.

How to Calculate Games Back

The best way to determine Games Back between rivals is to start by calculating their Win-Loss Differentials.

From there, we subtract one set of data from the other.

The 4.5 Games Back is always calculated for the trailing team, which in this case are the Giants.

As mentioned earlier, Games Back values change in increments of 0.5 for each game played per team.

When observing a GB value with a half number in the standings, it’s an indication that teams have played an uneven number of games.

If you dig further deep, that total number of games played between the two teams would amount to an uneven value (1, 3, 5 etc.)

In the Games Behind calculation just above, we reported a GB value of 4.5. Taking the sum for each team, you’d note that the Dodgers played 56 games to the Giants 55 games.

This even-odd game combination will always result in a GB with a half value differential.

Lastly, when teams complete the season, having all played the same number of games, the games behind will always results in a whole number (i.e. 1.0, 2.0 etc).

What does WCGB mean in Baseball?

WCGB is short for Games Behind for Wild Card Spot. More specifically, it is the number of games behind for a trailing team to seize the final wild card spot in their respected league.

Keep in mind that there are three wild card spots to be filled in each the American and National Leagues.

The same rules and calculations are applied to determine how far back in GB each team is to the last Wild Card holder.

The GB column is especially useful when teams are still battling for a sport in the postseason.

The last quarter of the season is especially crucial for teams on the bubble.

The Games Behind column paints a picture of how close a team is to closing the gap.

Meanwhile, we observe if the current playoff teams can cling onto their lead long enough to make it to the end.

For some avid fans, they’re more interested in seeing their teams suffer to better qualify in the subsequent season draft.

They’d want that GB and WCGB values to be as big as possible.

With teams drafting in reverse order of their standings, the worst team gets to draft first, and so on and so forth.