Why is Passing Important in Hockey? (28 Ways to Pass) 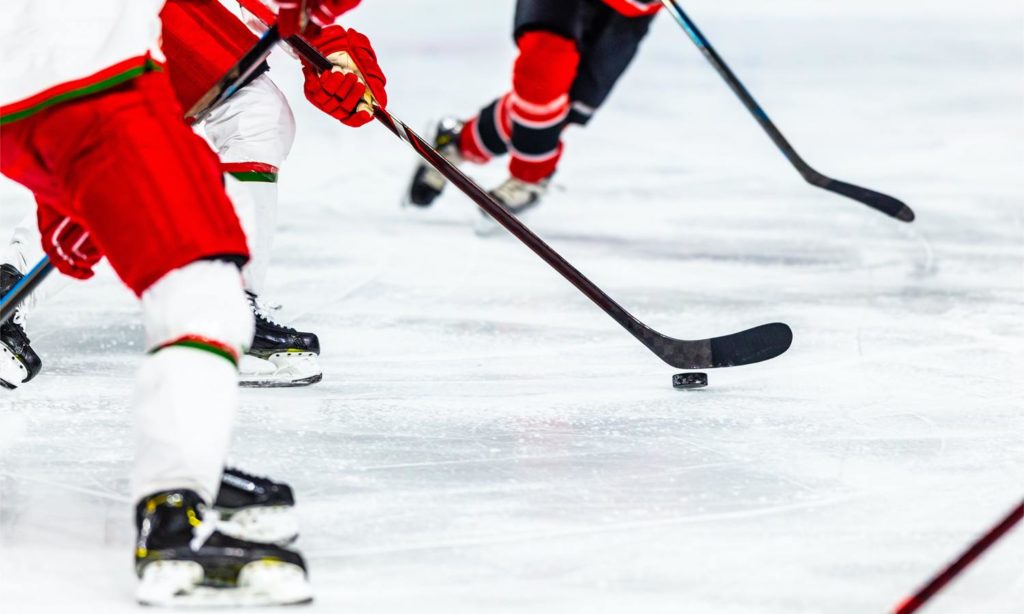 As hockey fans, we're always mesmerized by the individual efforts of NHL superstars. We love to see a Connor McDavid highlight where he undresses an unsuspecting defensemen and finishes off by scoring top shelf.

Just for those of you living under a rock, here's a clip that's been played like a broken record on the highlight reels and will likely rank as one of the top NHL plays in 2019-20.

Needless to say Morgan Reilly isn't a fan of this!

However, we need to remember something about hockey...

Hockey is a team sport.

And as for most team sports, passing is a major element of the game.

There are exceptions, such as doubles tennis, where teammates can't actually tap the ball to one another, but they still need to work together to win.

Why is passing important in hockey?

​Passing is important in hockey because it's the quickest way to move the puck from one player to another on the ice. The puck can be distributed faster than any player can skate.
While teams are on the attack, players can use passing plays to deceive the defending team and force the goaltender to reposition themselves, creating better opportunities to score.

Passing also allows teams to relieve defensive zone pressure and transition to an offensive break out in mere seconds.

This was not always the case in NHL. It took the NHL almost 10 years from inception to discover how passing can revolutionize the game.

So now that we understand why passing is so important, let’s take a look at its history.

History of Passing in the NHL

Originally, when the league was founded in 1910-11 as the National Hockey Association, forward passing was not allowed whatsoever. At the time, players were only allowed to pass the puck behind similar to rugby.

In 1918-19, the league introduced it's first passing rule change along with the creation of the neutral zone. Players were both allowed to make forward passes and kick the puck in the neutral zone alone.

In 1928-29, they expanded the forward passing rule to the defensive zone as well. The one caveat was that players were not allowed to pass the puck back into the defensive once the puck was advanced to the neutral zone. Players were assessed a minor penalty for the infraction.

In 1929-30, forward passing was allowed in all 3 zones, including the offensive zone. The only limitation was that the puck could not be cross either blue lines while attempting a pass.

By December 21, 1929, an amendment was made to the latest passing rule due to the doubling of goals scored in a game. Players were no longer allowed to enter the offensive zone prior to the puck (offside rule).

The last major passing rule change made was back in 2005-06 season. Prior to that season, teams were not allowed to pass the puck to a player across both the blue and red (center) line. This was known as the two-line pass and the play was blown dead in the same way as an offside call. The rule change was introduced to increase the pace of the game and create more scoring chances.

Below, I've compiled all the types of hockey passes that can be executed in a hockey game.

Some are situational and illegal passes while most others are descriptions of how the puck can be delivered from carrier to receiver.

In some cases, a passing play can fall under many categories. One great example is the pass by Erik Karlsson to Mike Hoffman just a couple of seasons ago.

If you analyze the play carefully, the pass can be described as a clearing, saucer and tape-to-tape pass all at once.

There was also another pass made famous by Mario Lemieux. In fact, this was a deception play where Lemieux never even touched the puck. It was coined as the no-touch pass.

See for yourself... This is what a player with high hockey IQ looks like.

Which is the hardest hockey pass to master?

The hardest pass to master from the list above is also the pass most frequently attempted in a game - the saucer pass.

Most players will quickly learn to deliver this type of pass while initially developing their game. The pass comes naturally off the carrier's stick and is so effective because it causes the puck to hit the surface flat once it lands. This allows the receiver to easily secure the puck for possession.

However, the carrier is required to properly judge distance, speed and the height to complete the pass. Try feathering a saucer pass at a short distance so that it lands perfectly to a receiver for a one-timer.

See the video example below where Evgeni Malkin delivers a picture-perfect saucer to Phil Kessel.

Did I forget to mention you need to get the right height to avoid turning over the puck to your opponent?

There are many other passes that can pose a challenge, but are almost never needed during play.

I'm thinking about between-the-legs and no-look passes. Tough to execute, but usually not required.

What was the greatest pass ever made?

Obviously, this will all come down to your own taste. Fortunately, the NHL compiled their Top 10 Assists of All Time. Watch the video here:

In my opinion, Mario Lemieux’s play at #5 looked absolutely amazing (starting at 2:15). The fact that he performed a toe drag prior to delivering that laser beam backhand pass is what makes it even more ridiculous.

Some may argue that the Karlsson long bomb (see video above) deserves consideration should the list be updated to today. Keep in mind that this top 10 video was published back in 2013.

However, you may recall Peter Forsberg dished a similar hail mary to Rob Blake a few years back (see here). Except that Karlsson’s saucer pass landed square on Hoffman’s blade, as if the puck were on a string.

Who is the greatest passer of all time?

Well, it’s actually a no-brainer for me - Wayne Gretzky. Simply because he has more assists than any player has total career points (which include goals). His ability to read and anticipate play was second to none.

He averaged close to 2 points per game over his career. It's as if he could score or set up his teammates to score at will.

If you were to ask me who's the best passer (playmaker) in today’s NHL, my answer is - without a doubt - Sidney Crosby. Just take a look at this no-look, between-the-legs passing play. In fact, you can add drop pass to the description as well.

The last time that Teddy Blueger (#53) was in Crosby’s field of vision was at the blue line. It’s just crazy how he knew exactly where to pass the puck and anticipated his teammate being in position. It's no surprise that Sidney Crosby will end his career as another one of the all time greats and amongst the top scoring leaders.

In my opinion, the most elite players are those that can make everyone around them better. It's why passing is so important to the game of hockey.

There is so much that we covered on the topic of hockey passes.

We looked at its history in the NHL and learned how changes to the rules of passing lead to more goals being scored.

Furthermore, we learned about 28 passes every player can master. And as your game progresses, you can add many of these to your playmaking arsenal.

If you're a beginner and reading this, I suggest you start with the basics. Since I didn't clarify earlier which passes you should start with, I'll list them here:

Once you've master these passes, most of the other ones will come to you naturally.

Others types on the list are very high risk passes (i.e. behind the back, between the legs). One badly executed pass can result in a turnover and possibly a goal against.

If you ever want to test your capabilities, you're better trying them in the offensive zone only. Try out the give-and-go or a centering pass to a player in the slot.

Just make sure you're never the last man back as it never ends well.

If you're an avid rec league player, you might be interested to read about my list of 11 Subtle Tips on How to Player Beer League Hockey. One of the tips emphasizes on passing and when to execute depending on the situation.

Is there any other reason why you consider passing to be important? Can you name any other types of passes that were not included in the list?