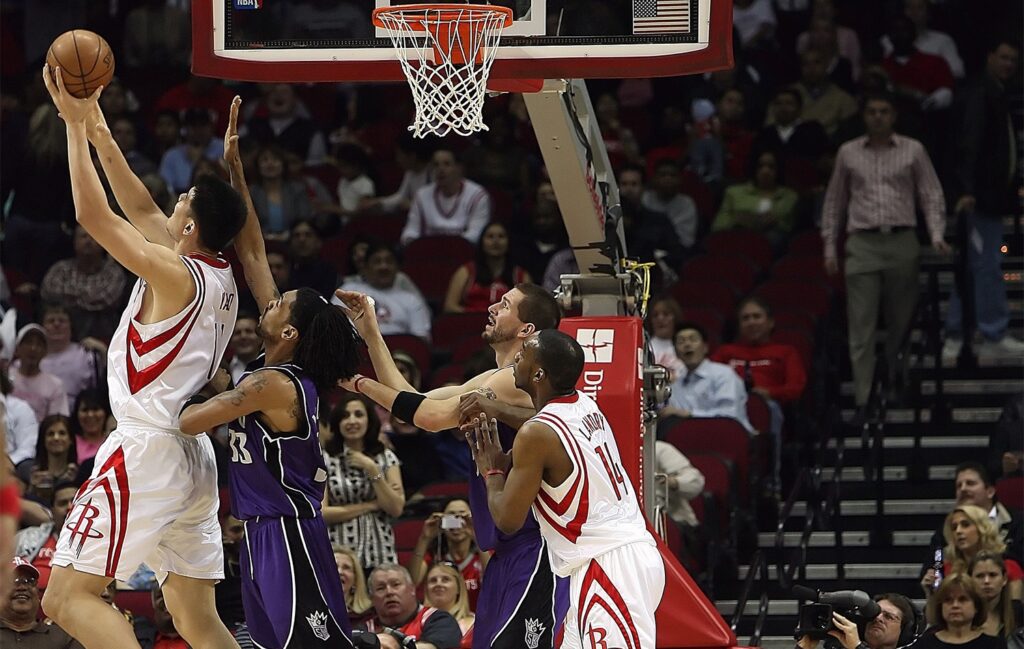 It’s no secret that height is an important factor to even be considered to making the NBA, let alone a professional basketball player.

While height is not something you can teach, it gives basketball players a competitive edge for shooting, scoring, defending, rebounding, and covering more ground on the court.

But as reach a certain height, your center of gravity shifts which can compromise your coordination and mobility.

So just because your 7-0 feet tall, doesn’t necessarily mean you’ll be better than your counterparts at 6-7 or 6-8.

And with that said, what is the average height of NBA players?

The average height of an NBA player is 6 foot 7 inches (or 200cm) based on all eligible roster players (499) for the 2022-23 season. The tallest player is Boban Marjanovic (Houston Rockets) at 7 foot 4 inches, while the shortest is Facundo Campazzo (Dallas Mavericks) measured at 5 foot 10 inches.

For the math freaks in my audience, the precise value for average NBA player height was calculated to be 6 foot 6.59 inches (or 199.62cm).

According to thehoopsgeek.com, the average height has hovered between 6-6 and 6-7 since the early 90s.

It peaked at 6 foot 7.2 inches in 1987 while player weights were trending on the upside. That’s because players were expected to bulk up to better challenge the opposition.

I recall seeing a documentary about how the Detroit Pistons kept Michael Jordan (and the Chicago Bulls) at bay during his early years.

They used their physicality to limit his offensive prowess.

In the subsequent years, Jordan used the off seasons to build his strength and muscle mass to overpower his opponents.

In 1991, Jordan and the Bulls managed to sweep the Detroit Pistons in the Conference Finals, followed by a 4-1 win against the Lakers to capture the NBA title.

It was the Bulls’ first of 6 championships during the Jordan era in the 90s.

But take note that player weight started declining again in 2016.

Does this have anything to do with Steph Curry leading the Golden State Warriors to multiple championships?

Quite possibly. Steph Curry is a lean player but also one of the most agile in the league.

The game has also evolved into a perimeter-heavy strategy.

Speed and mobility have taken precedence over muscle and power for this type of gameplay.

And as mentioned, there hasn’t been any evolution in height during this period.

Height continues to play a significant role in draft strategy and player selection.

More so for particular positions such as Center, Small and Power Forwards.

The average height a Center in the NBA is 6 foot 11 inches. This is based on 66 players either playing center exclusively or pivot between center and forward. As a note, all these players are primarily designated as centers in the NBA.

Lastly, there are 27 players that measure 7-0 feet and over. And as mentioned before, the tallest player currently is Boban Marjanovic at 7-4.

The average forward height in the NBA is 6 foot 8 inches – small and power forwards combined. This is based on 208 players that either play forward exclusively, or at times pivot up to center or even down to guard.

The tallest forward is Kristaps Porzingis of the Washington Wizards. listed at 7-3. One of the most notable power forwards 7 feet and over is Giannis Antetokounmpo of the Milwaukee Bucks at 7-0.

The average guard height in the NBA is 6 foot 4 inches – which includes both point and shooting guards. This is based on 225 players that primarily play the guard position.

The tallest guard currently is Ben Simmons of the Brooklyn Nets. As a note, he does pivot between Point Guard and Small Forward, but is primarily a guard in the NBA.

Meanwhile, the shortest guard for 2022-23 is Facundo Campazzo of the Dallas Mavericks listed at 5-10.

It’s always interesting to see how the game evolves and how it ties to the physicality of the roster players.

And this downtrend in weight does not correlate to any change in height, which has stagnated for the last 30 years.

Could we ever see a downtrend or uptrend in NBA height based on the evolution in play?

It will be interesting to see how the next decade or two play out.