How Many Referees in a Hockey Game? 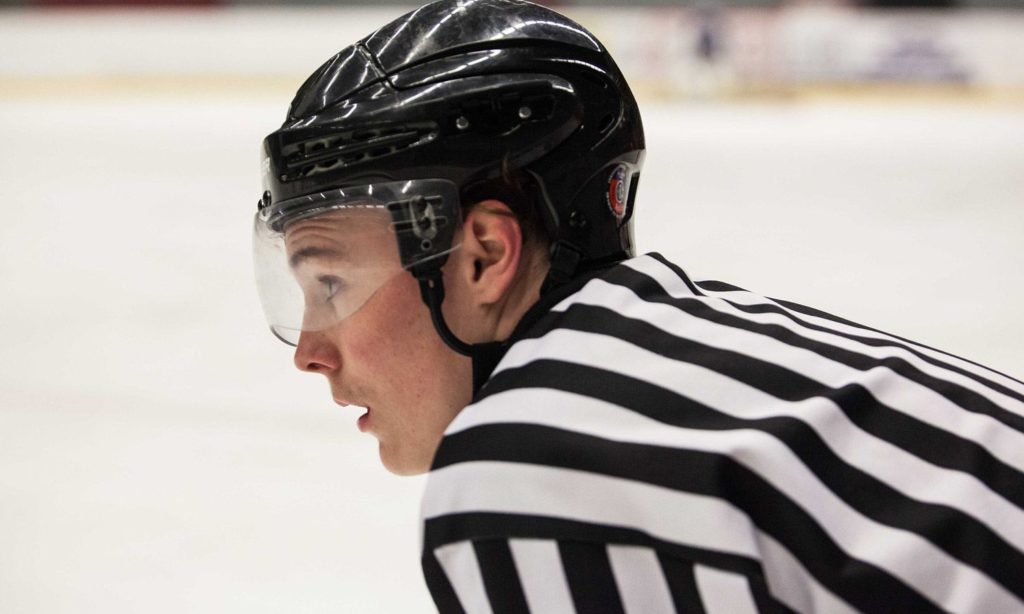 Just like all professional sports, there are officials assigned to oversee every hockey game.

The NHL and other major hockey leagues employ both on-ice referees and linesmen to officiate the games. Each have their own set of responsibilities.

The referees are in charge of calling goals and penalties in violation to the rules. The linesmen are mainly responsible for calling offsides and icing.

For those new to the game, there is a simple way to distinguish between an on-ice referee and linesman. At quick glance, both wear pinstriped jerseys and black pants.

However, referees have orange armbands present on both sleeves, while the linesmen don’t.

Now that you know the difference between referees and linesmen, you probably want an answer for the following question.

In fact, you likely landed on this post because of this one question.

How Many Referees in a Hockey Game?

There are 2 referees and 2 linesmen assigned to each NHL hockey game. The four-official system (or two-referee system) was first introduced in 1998-99 on a trial basis and fully implemented as of the 2000-01 NHL season. Prior to that, the NHL worked with one referee and 2 linesmen for nearly 60 years.

The addition of the 2nd referee was to ease the workload and provide a second set of eyes for the existing referee.

The problem is that one referee cannot catch every infraction, especially if they occur behind the play. Keep in mind that referees are also responsible for calling goals, so they'd need to cover both ends of the ice when alone.

As stated earlier, two referees working together can cover more ice. Rather than have a single referee skate continuously end-to-end, you have each referee cover the lead and trail position on the ice.

The lead referee is typically positioned in the corner along the goal line, while the trail referee is in the neutral zone. When the play transitions to the opposite end, the referee switch their roles. As a result, you have two referees covering each half of the ice with one set of eyes always behind the play.

There are two main disadvantages that come to mind with the two-referee system.

First, the playing surface has up to 16 people at once, making it really cramped. The maximum count includes 5 skaters on each side, 2 goalies and 4 officials.

If you’ve watched enough hockey, you’d know that referees and linesmen can interfere both with players and the puck. The way to see it is that the officials have just as much right to be on the ice and may inadvertently obstruct with certain plays.

Most of the time, the interference leads to no harm. However, there are occasions where the referee or linesman can have an impact on a goal. At the very least, there is a rule in place that if a puck deflects off an official and into the net, it is deemed “no goal”.

The second disadvantage is that each referee may call the game differently. The idea is to train the referees to call plays equally, but they are still human after all.

Players will complain that one referee is quick to call penalties, while the other tucks their whistle away (source).

In the end, the NHL ruled that the advantages far outweighed the disadvantages of the two-referee system and they haven’t ever looked back. Overall, the officiating rules have remained consistent in that each referee is free to make their own calls and cannot be overruled by the other.

There are certain plays that require all officials to convene together.

The one that comes to mind is the “delay-of-game” penalty. This will happen when the puck is cleared over the boards by the defensive zone team.

The official who blew the play dead can consult with their peers to determine if the player was actually in violation or not.

The NHL originally used 2 officials in its early days. It was a system of one referee and one linesman.

The change was again short-lived, as the league introduced a 3-official system in the 1941-42 season. The officials were made up of one referee and 2 linesmen.

Finally, in 2000-01, the two-referee system would be implemented in all games.

What if a referee gets injured?

The NHL rulebook outlines all contingency plans when it comes to officials getting injured. According to Section 5, Rule 31.11 of the 2019-20 Rulebook (source) regarding referees, the NHL states the following in:

Unable to Continue - Should a Referee accidentally leave the ice or receive an injury which incapacitates him from discharging his duties while play is in progress, the game shall be automatically stopped. If the Referee is unable to continue, the game shall continue using the one Referee, two Linesmen system.

If, owing to illness or accident, one of the Referees is unable to continue to officiate, the remaining Referee shall perform the duties of the ill or injured Referee during the balance of the game. In the event that a member of the League’s Hockey Operations or Officiating departments is in attendance at a game where a spare official is present, he shall have the authority to substitute the injured Referee with the spare official.

If, through misadventure or sickness, the Referees and Linesmen appointed are prevented from appearing, the League will make every attempt to find suitable replacement officials, otherwise, the Managers or Coaches of the two Clubs shall agree on Referee(s) and Linesman(men). If they are unable to agree, they shall appoint a player from each side who shall act as Referee and Linesman; the player of the home Club acting as Referee and the player of the visiting Club as Linesman. If the regularly appointed officials appear during the progress of the game, they shall at once replace the temporary officials.

Unable to Continue - Should a Linesman appointed be unable to act at the last minute or through sickness or accident be unable to finish the game, the Referees shall have the power to appoint another in his stead, if they deem it necessary, or if required to do so by the Manager or Coach of either of the competing teams. If no replacement Linesman is available, the two Referees will assist the remaining Linesman with his duties while still retaining their ability to assess penalties when deemed appropriate.

In short, should either referee or linesman get injured, the game will continue using a 3-official system. For a single referee and two linesmen scenario, all officials will continue with their existing duties.

Meanwhile, should a linesman go down, the referees are expected to help out with the linesmen duties along with their existing duties. Of course, this is only required if a standby linesman isn’t available.

I will refer back to both NHL rulebook paragraphs should two or more officials get injured during the game. I find it interesting that a player on each team could be required to fill in for referee and linesman duties should all officials become incapacitated.

Lastly, it should be noted that the NHL has referees on standby for the entire playoffs.

The NHL has evolved from a two-official system to a four-official (two-referee) system since its early days.

And just like many other rule changes, the increase in officials did not elude opposition.

When first adopted, the worry was that the rink would be way too overcrowded with up to 16 players, goalies and officials.

Furthermore, call consistency remains an issue until today. Infractions that are ignored by the lead referee might still be called by the trailing referee or vice versa.

By the same token, the one-referee system has proven to be insufficient to supervise the full 200-foot game on a regular basis.