What is the Five Hole in Hockey? 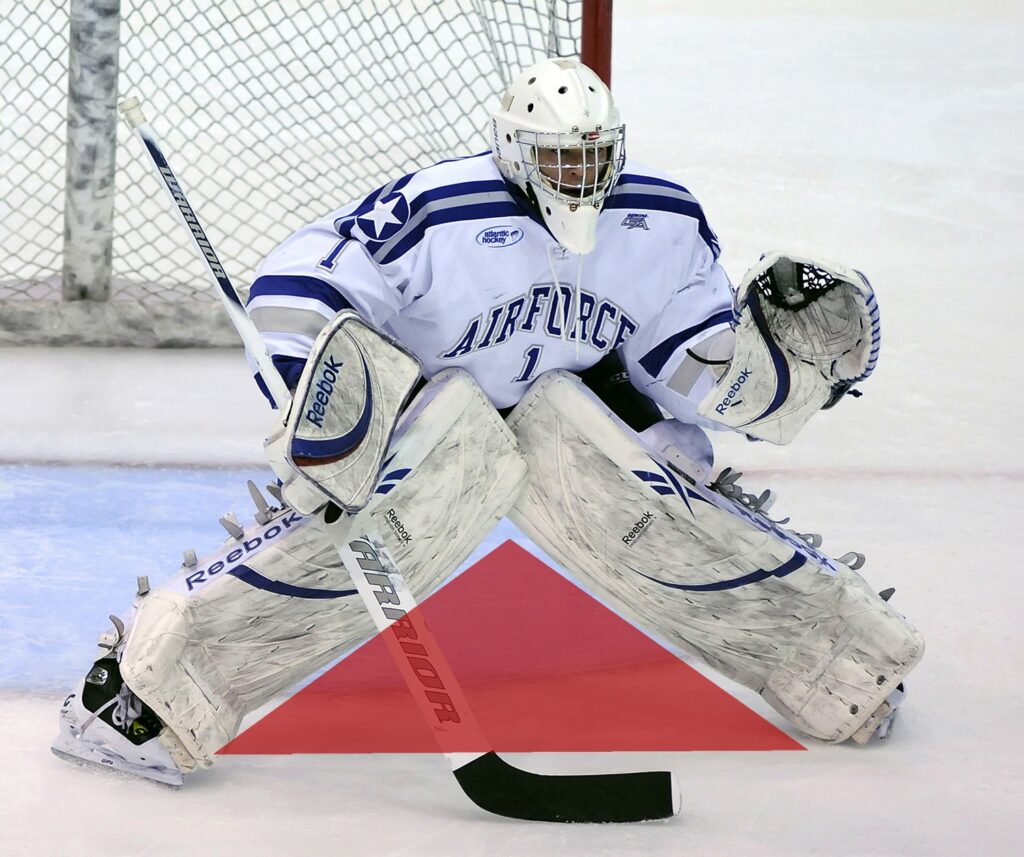 When attempting to score in hockey, players tend to aim at areas left open by the goalie.

The better the goalie, the more they cover these openings on net, namely because of proper positioning. However, the closer you approach the goalie, the harder for them to protect all the angles.

One area that becomes more vulnerable as you get closer is the five hole. This is especially true if you can force the goalie to move laterally across the crease.

What is the five hole in hockey?

The five hole refers to the open space between the goaltender’s legs where the puck can pass through. The term is commonly attributed to the 5th pin in bowling, which is located at the center of the alignment. It is also the 5th of the five spots where players aim to shoot past the goalie.

Take a look at the image below, which identify each of the five areas to shoot on net. Keep in mind that nobody refers to these corners as the three hole or one hole, for example. These terms never caught on.

Rather, players use terms such as stick-side and glove-side – high or low. (i.e. stick-side high)

As mentioned earlier, the term “five-hole” is thought to have originated from the sport of bowling. In the standard 10-pin version, the 5th pin is the centermost in the triangular formation. Alternatively, the Canadian version of bowling consists of only five pins, with the middle pin being worth 5 points when knocked down.

In addition, Merriam-Webster Dictionary defines “five hole” as “the space between the legs of a goaltender”. It was added to their list of definitions back in 2017. While they do not provide an exact reference, Merriam-Webster states that its first known use was back in 1980.

According to Wikipedia, David Neal is credited with using the term “five hole” back in 1980. However, I can confirm that this statement is not true.

Neal’s name is mentioned in an article by Bardown, describing him using the term while writing for the sports section of the Miami Herald.

He states that Pavel Bure scored five hole on Jeff Hackett to help the Florida Panthers beat the Montreal Canadiens.

The problem is that the game never took place in 1980. The game was held sometime between 1999-2003, while both players played for the cited teams.

According to this Star Tribune report, the term “five hole” originated from Jacques Plante, the famous Montreal Canadiens goaltender. He is also the author of the book On Goaltending, written in 1972, which refers to the five holes goalies must protect.

This is still in debate, which is another reason why reference to the one through four hole never stuck.

The farther you’re from the net, the harder it is to score five-hole. In all honesty, it’s hard to score on any good goaltender, unobstructed, from far.

As you approach the net, the goalie has less time to react with more angles to cover. There is also the threat of the player passing to a teammate stationed by the far post, exposing the opening between the legs.

We’ll cover some of these different techniques and provide video examples which target the five hole.

In the video below, Sidney Crosby managed to shake loose from the Tampa Bay Lightning defense and elected to shoot on net from the slot area.

This is pure example of shooting five hole on net. The shot was quick, precise and managed to elude the goalie’s blade guarding the space between the pads.

If you want to learn more about the different shots used by NHL players, make sure to check out my blog post here.

When you shift the goalie’s position, it opens up a small opportunity to slide the puck five hole. You can achieve this either by stickhandling side-to-side and release a quick shot.

In the video below, Alex Ovechkin (Washington Capitals) does a slight backhand to forehand shimmy to force Ondrej Pavelec (Winnipeg Jets) to move laterally.

The backhand five hole deke is a deception technique to open the goalie up between the legs.

In the video below, Sebastien Aho (Carolina Hurricanes) uses it to perfection against Ben Bishop (Dallas Stars).

When Aho stickhandles to his backhand, he forces Bishop to shift his position and displace laterally. Bishop probably thought Aho was aiming backhand glove-side, which shifted his focus away from his five-hole.