What is an Icing Call in Hockey? 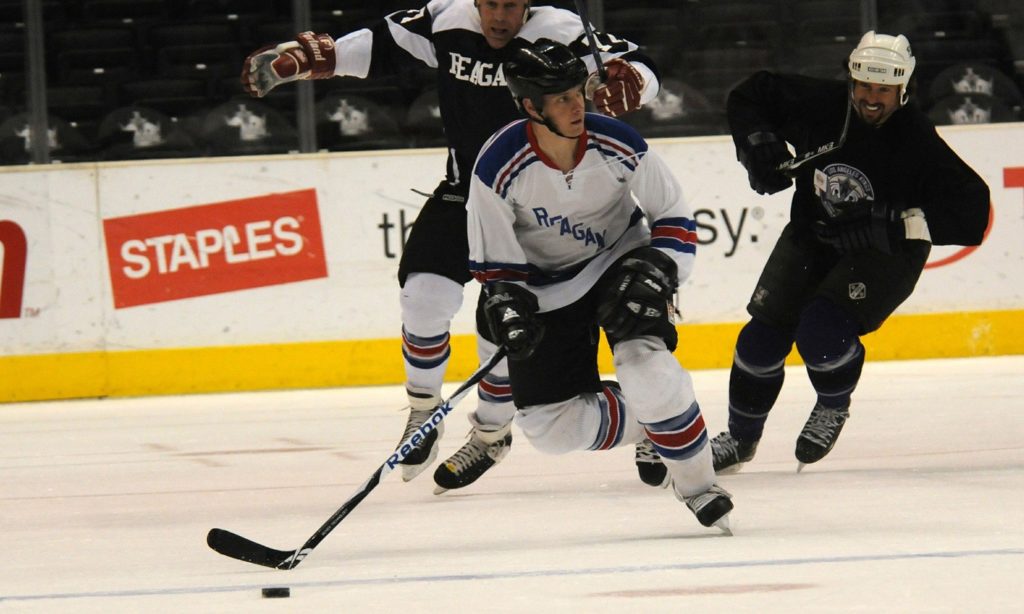 While watching a hockey game, you'll notice that the referees often blow their whistles to stop gameplay.

There are many reasons to blow a play dead including penalty calls, goals scored and offside infractions.

Another common stoppage of play can result from teams icing the puck. While icing is considered an illegal play, it does not result in a penalty call.

That's great, but before we detail the specific rules about icing, let's first answer the question you came here for...

What is an Icing Call in Hockey?

Icing is a hockey play violation where the defending team shoots the puck from behind center line, past the opposition’s goal line. The play is whistled down if the opposition is closest to the puck when skating across their zone face-off circles. The infraction was introduced to punish the defending team for using delay tactics to relieve scoring pressure in their zone.

Following the infraction, the subsequent face-off is taken at either of the defensive’s team face-off dots. As of the 2019-20 NHL season, the opposing team can choose on which side of the ice they prefer taking for the puck drop.

Below is an image explaining the difference between an icing infraction and a legal play with the puck. 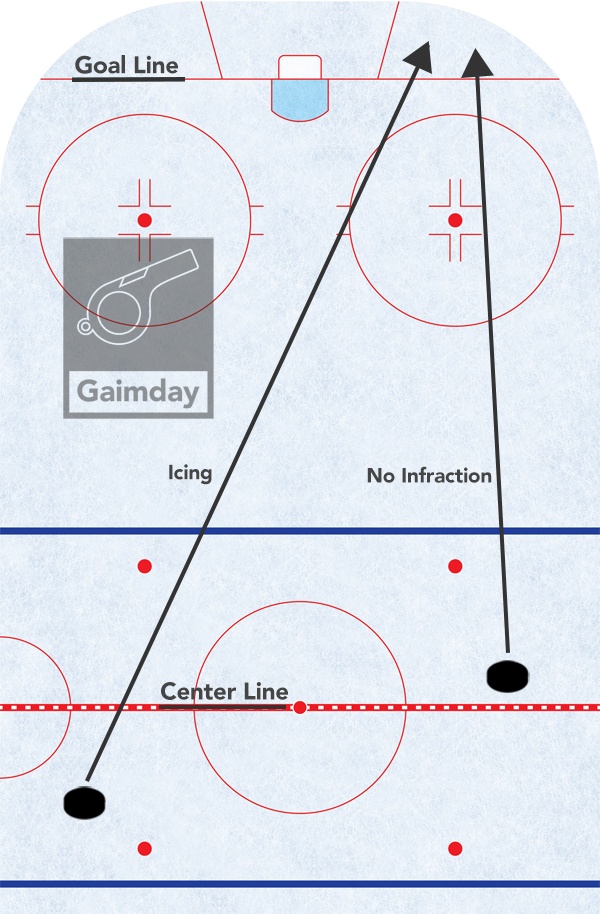 When is Icing Called Off?

There are several exceptions to consider if the icing will be called off by the referee.

The NHL and many other professional hockey leagues have adopted the hybrid icing rule. That is, if a player from the violating team skates by the face-off dot before any of the opposing players (aside from the goalie).

If the puck crosses the goal line and enters the net, the play is determined to be a goal. This is often the case when the opposing team pulled their goalie and the puck has a clear path to the back of the net.

Puck played or intended to be played by goalie

If the puck makes contact with the goalie at any time while the play is still alive, the referee will wave off the infraction. Moreover, if the opposing goaltender shows any intent on playing the puck, the referee will call off the icing.

In some cases, the referee will wave off the icing if they feel the opposing player could have reached the puck before it crossed the goal line. This is usually the case when the puck is travelling slowly passed the goal line and the player is showing little effort to recover the puck quick enough.

If the defensive team is on the penalty kill and clears the puck down the ice (past center line), icing will not be called. I go more into depth about the penalty kill or, conversely, the power play, in my blog post here.

There are 3 known types (or variations) of icing:

As described earlier, hybrid icing is the current variation adopted by the NHL and other pro sports leagues. Once the puck is iced, the play will be whistled as an infraction should the opposing team player skates by their defensive red dot first.

Touch Icing was the version of icing adopted by the NHL prior to hybrid. In this case, the referee would signal the infraction and whistle the play dead if the opposing team player touched the puck first.

No-touch icing is very popular in recreational or amateur sports leagues. Basically, whenever the puck is iced, the referee will blow the play dead once the puck reaches past the opposing goal line regardless of player positions on either team. The only exception is if the goalie shows intent on playing the puck.

History of Icing in Hockey

Icing was adopted at the NHL level in 1937 to penalize teams that were clearing the puck as a delay tactic. In short, defensive teams were shooting the puck down the ice to prevent the opposing team from bridging the gap in score.

There have been several amendments to the icing since its adoption, including the following changes. In 1951, icing was waved off if the goalie chose to play the puck. In the 1990-91 season, if the puck travelled through the crease area icing would be also be nullified.

Line change restriction was implemented in the 2004-05 season – that is, the offending team was required to keep the same players on the ice. And as of the 2013-14 season, touch icing was replaced with hybrid icing (source).

Most recreational hockey leagues adopt the no-touch icing (automatic icing) rule. In this case, the referee will call the icing infraction as soon as the puck crosses the goal line regardless of any of the player positions on the ice. So, for example, even if the infracting team has a player closer to the puck, the play is called dead anyway. Icing will be waved off if the goalie makes contact with the puck, or if they show intent to play the puck.

I’ve witnessed one variation of the no-touch icing rule at an intramural league, still active until today. Icing would be waved off if the player clears the puck passed their own blueline rather than from center line (standard rule).

Make sure to check out this video of Snoop Dogg explaining the rules of icing. Although the NHL released videos like these as a tongue in cheek, Snoop clarifies the infraction quite clearly.