What is a triple-double in basketball? (Top 10 Leaders) 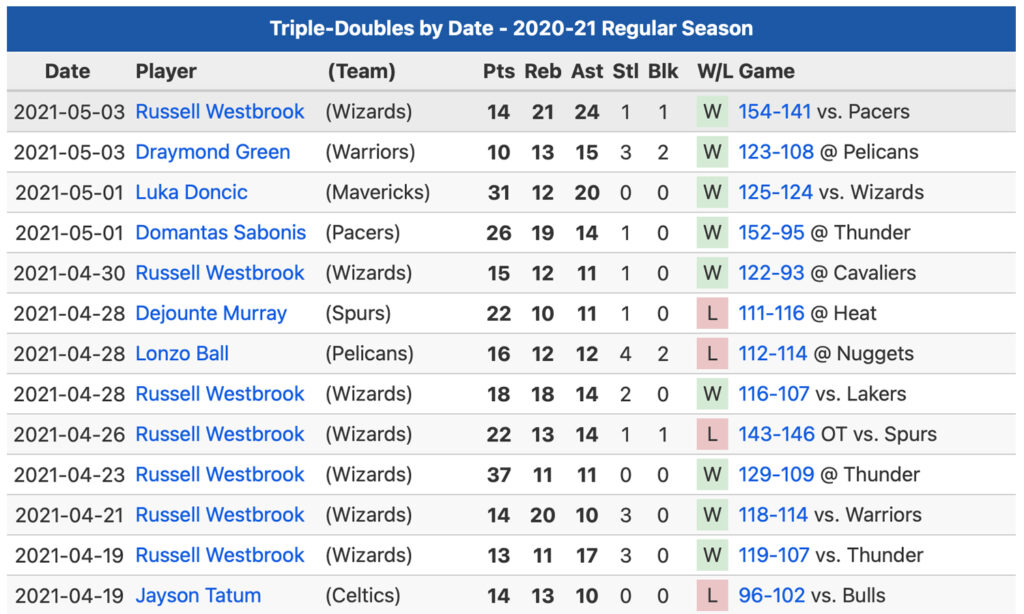 When basketball pundits and avid basketball fans compare star players in the NBA, the first thing they look at is their stats.

Most likely, they pay close attention to their points per game, but that doesn’t always paint the full picture.

Some players excel at other aspects of the game such as assists, blocks, rebounds and steals.

A unique way to dominate the court is by collecting stats in more than one of these categories during the game.

When that happens, you might bear witness to a player finishing up the night with a triple-double.

What is a triple-double in basketball?

The all-time leader for triple-doubles is Russell Westbrook with 184, eclipsing the previous record holder, Oscar Robertson (181).

Russell Westbrook managed to surpass Robertson in the 2020-21 season. But it is important to note that steals and blocked shots were not monitored stats back when Robertson played in the NBA (1960-74).

Had all 5 statistical categories been tracked back then, Robertson’s triple double count would be much higher.

The triple-double stat was officially recognized by the NBA as of the 1979-80 season. So, in Robertson’s case (and other past stars), the league had to retroactively count the times he achieved the feat.

Knowing now that the NBA started counting triple-doubles in 1979-80, where did the term actually come from?

The earliest use of the term remains uncertain, but there are two origin stories that have widely floated around.

The first stems from the Los Angeles Lakers public relations director, Bruce Jolesch, who associated the term with the Lakers’ superstar Earvin “Magic” Johnson. Jolesch wanted to bring attention to Magic’s dominance in various aspects of the game, and not just his scoring ability (source).

The alternate claim is that Harvey Pollack, the media relations director of the Philadelphia 76ers, came up with the term.

Both stories have merit given that Magic Johnson accumulated 138 triple-doubles in his career, good for third place all-time to date.

Has an NBA player ever topped a triple-double?

There are 4 officially recorded quadruple-doubles in NBA history. The feat was achieved by Nate Thurmond, Alvin Robertson, Hakeem Olajuwon and David Robinson (source).

In fact, Olajuwon almost managed to achieve a quadruple-double twice in one month. There is an article claiming that he managed the feat twice, while another report states he missed the mark by one assist.

Below is a table of how each these four players recorded their quadruple-double.

As for the elusive quintuple-double, there was none recorded in NBA history.

There is a rumor claiming that Wilt Chamberlain recorded double-digits in all 5 categories in one game, but it has never been officially validated.

On that day, I can confirm, with certainty, that Chamberlain hit a triple-double by registering 53 points, 32 rebounds and 14 assists.

According to this tagged article, Chamberlain also managed 24 blocks and 11 steals. But as we already know, the NBA didn’t monitor blocks and steals back then.

With the talent Chamberlain possessed, it wouldn’t surprise us if he actually did accomplish the feat.

Sadly, we’ll never know for sure.

While triple-doubles have become commonplace in today’s NBA game, there are some accomplishments that stand out more than others.

As a note, there are 129 (and counting) triple-doubles for the 2020-21 NBA season. For the latest count, and for details on prior seasons, take a look at the reference site here.

Let’s get back to some of the most unique triple-double performances in NBA history:

For the longest time, Wilt Chamberlain was the only player that belonged to the 20-20-20 triple-double club.

But along came Russell Westbrook to keep him company.

Westbrook and the Oklahoma Thunder beat the Lakers by a score of 119-103 that day.

Prior to the 2015-16 season, a triple-double which included a 50-point performance was a rarity.

But with the uptick in production from both James Harden and Russell Westbrook, the 50-point triple-double performance became more common – at least by these two guys.

So, Harden decided to up the ante and set the new bar to a 60-point triple-double performance.

He is currently the only player to ever do so, but let’s not count Westbrook just yet with a 57-point triple-double under his belt.

On February 10, 2017, Draymond Green managed one of the quirkiest triple-doubles of all-time.

Green and the Warriors beat the Grizzlies by a score of 122-107 on that day.

But what stood out most was the fact that Green had a historical performance even though he had a 4-point night!

So, how did he manage the triple-double?

This stands as the only triple-double in history to exclude double-digit points while achieving the feat.

Keep an eye out for Russell Westbrook this year. He'll likely widen the lead on previous record holder, Oscar Robertson.

And If you liked this article, make sure to also check out my blog post on What NBA team has the most wins in a season?

I get into detail about the top performing teams of all time along with the worst performers as well.